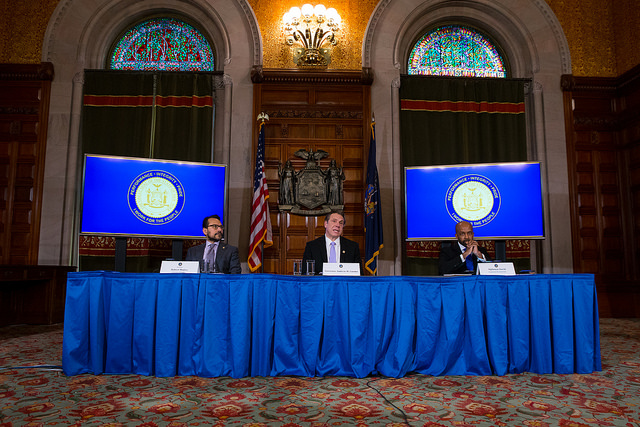 Governor Andrew Cuomo forgot about government ethics reform. At a press conference Wednesday, the governor explained to reporters that state budget talks had fallen apart over a few core issues. He pointed out with pride, though, that virtually everything he had proposed earlier this year he had gotten the Legislature to agree on, other than two major sticking points related to criminal justice and affordable housing. Cuomo had to be reminded by his budget director, sitting to the governor’s right, that Cuomo’s ethics reform agenda was another item without agreement.

In fact, it appears that Cuomo’s government ethics, campaign finance, and voting reform platform, which he unveiled in January along with the rest of his 2017 policy agenda and budget outline, is the only entire category of proposals completely off the table as budget negotiations continue.

It is not surprising that government ethics was not top of mind for Cuomo, who is trying to negotiate a $160 billion state budget under challenging conditions. The state is already a week into its new fiscal year, operating under a budget “extender” in order to keep state government functioning. That extender was passed Monday and is good through May 31, but Cuomo and legislative leaders had continued to negotiate in hopes of passing a full fiscal year budget before legislators left the capital for their customary two-week April break. Cuomo announced Wednesday evening that there was no deal, speaking to reporters during a press conference in the Capitol’s Red Room and flanked by his budget director and lead counsel.

The governor gave a nearly 20-minute explanation of budget negotiations and his take on where things should head, then took questions from reporters, repeatedly stressing all that he had gotten legislators to come to terms on. Virtually all of his proposals, the governor said, had been accepted in some form, other than raising the age of adult criminal responsibility and a new property tax abatement program meant to spur affordable housing development in New York City. Cuomo then asked his budget director for confirmation. “Ethics reform,” Robert Mujica reminded him; “and ethics reform,” Cuomo repeated, adding it as a footnote to the conversation.

Through his omission and then recognition that ethics reform was nowhere to be found, Cuomo acknowledged that even with negotiations set to continue, his lengthy set of “good government and ethics reform” proposals would not pass the Legislature any time soon. The agenda includes closing the infamous LLC loophole, creating a public campaign financing system, instituting early voting, and more.

The lack of movement on these reform measures comes despite the fact that a recent public opinion poll by Quinnipiac showed that 80 percent of New York voters said state government corruption is a "very serious" or "somewhat serious" problem. And, after major corruption scandals brought down both recent leaders of the two houses of the state Legislature and several close associates of and donors to Governor Andrew Cuomo were indicted on corruption charges. On Thursday, a federal court judge set a trial date of October 30 in the case against former Cuomo aides and donors for bid-rigging, bribes, and kickbacks related to the governor’s signature economic development programs.

The lack of movement also comes after New York ranked 41st in voter turnout among states in the 2016 presidential election.

As Cuomo highlighted Wednesday night, many compromises have been reached through negotiation, including billions more funding for the governor’s economic development programs. “We have an agreement on many items,” Cuomo said. “We have agreement on the Millionaire’s Tax, on the middle-class tax cut, on the water program that’s actually passed, on ride sharing, on college affordability, on workers’ comp, on property tax reform and citizen empowerment to get people involved in their state and local taxes...we have agreed on a prescription drug program, which is the first-in-the-nation, on a opioid program, which is a very aggressive program – so, we’ve done a lot of good work.”

But, there has been no movement on the 14-plank reform agenda that Cuomo included in his executive budget, which was released in January just after he concluded his six-stop State of the State speaking tour in Albany with reform measures as a key piece of his final speech.

“State government must do more to restore the public trust because as public servants we earn the trust of the people we serve. Unfortunately, in Albany there have been a series of breaches of that trust,” Cuomo said in January. “We must take action to show the people of this state that we get it, and that when someone does something wrong, they are punished to the full extent of the law and we have a system that is going to catch them.”

Nor has there been any movement on adding new oversight measures to Cuomo’s economic development spending, such as renewed contract vetting powers for the state Comptroller.

“[I]t doesn't look like the issue of procurement reform or much of the other reforms that people have been pushing for seem to be included [in the budget],” Comptroller Thomas DiNapoli told Capitol Pressroom host Susan Arbetter on her show Wednesday morning, “so let's hope that that means that those issues will be dealt with post-budget. They're very important issues.”

“We need to tighten up our procurement procedures,” DiNapoli continued, adding that while economic development is important, “more checks and balance, more oversight, is appropriate.”

Those who watch state government closely see that in many cases, Senate Republicans, who control that chamber, form the blockade to proposed reforms. But, it is also evident that Cuomo appears to put little priority in seeing major reforms through. Known for his ability to get passed what he prioritizes, including controversial measures like same-sex marriage to gun control to minimum wage hikes, Cuomo has been notably silent on ethics and voting reform since his January State of the State.

One exception being when Cuomo was asked by a WNYC radio reporter about moving voting reforms through the budget and he replied that he was going to try, but they weren’t really budget matters and could be taken up in the legislative session to follow a budget agreement.

On Tuesday, Cuomo told reporters that raising the age of adult criminal responsibility should be done in the budget because it has financial aspects to it. The same could be said for early voting, which would require polling places to be open leading up to Election Day.

Cuomo’s office did not respond to two requests for comment about the governor’s “good government and ethics reform” agenda being fully absent from the budget.

While the Legislature did not go along with these proposals, it also failed to adopt measures Cuomo included that would apply more broadly, like closing the LLC loophole -- which the governor has benefited the most from -- and instituting public campaign financing, and a measure that would expand the state’s freedom of information law to include the Legislature.

On the other hand, the Legislature was seeking more transparency from the members of Cuomo’s Regional Economic Development Councils through financial disclosures, in part to examine if REDC members had any business stakes in projects related to their volunteer work on the councils, which help dole out millions of state grants. Cuomo strongly objected to this proposal and it also appears to be out of the budget.