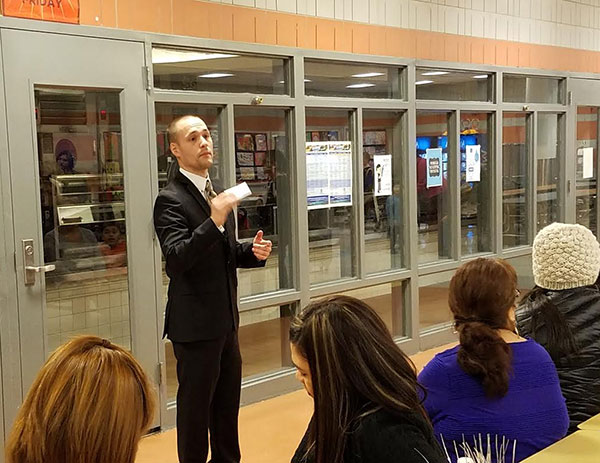 If Queens voters were looking for fresh face to represent them in Albany, they found it in Assemblymember Brian Barnwell.

The 30-year-old attorney beat out nine-time incumbent Assemblymember Margaret Markey during the September Democratic primary with a shocking 63.8 percent of the vote, and easily swept the general election against Republican Tony Nunziato. While Barnwell did well districtwide, many in Maspeth, Queens disapproved of Markey’s response to the city’s proposed homeless shelter in the neighborhood, a hot button issue that drew weeks of heated protests.

Barnwell is not new to the Albany area. After graduating Arizona State University, he obtained a law degree from Albany Law School. After working as a lawyer for several years, he worked as an aide in Queens City Council Member Costa Constantinides’ office. Now a lawmaker himself, Barnwell said he aims to find solutions for strengthening the middle class and those struggling to enter the middle class, and he has already put forward legislation related to affordable housing, senior issues, and workers’ safety. He spoke with Gotham Gazette in early May about New York’s affordable housing crisis, his first state budget experience, why it’s good to have millennials in the Legislature, and more.

Gotham Gazette (GG): What were your first few months like? Orientation?

Assemblymember Brian Barnwell (BB): “I thought everyone was all very helpful, the speaker’s staff were great, they’re all very nice and very helpful. The members themselves are still always saying, if you have any questions about anything, don’t be afraid to ask.

Honestly, as an attorney, when you graduate law school and you go to court, you are kind of thrown to the wolves as well. So you get used to it. You ask questions, if you have them, and if you don’t, you figure it out.

There was an orientation process, I think it was three days -- it feels like 80 years ago already. You get up there and they go over the basics. ‘This is who you go to if you have this issue.’ You know, ‘this is how the procedure how the Assembly works if you want to submit a bill.’ They go over the basics of bill drafting and indexing.

Same thing, when you are in law school, you learn the law. Usually, there are a couple classes you can take here and there, but mostly, when you get to court, you don’t know the ins and outs of the everyday procedure.

Same thing, obviously, when you are legislator, you know the things you want to change, but you don’t know how to change it. So you learn the procedure, the inherent procedure of the Assembly, and that’s what they teach you at orientation.”

GG: How do you juggle the weekly commute? Any favorite restaurants yet?

BB: “I actually went to law school up in Albany, so it’s not too different for me. When I was in law school, I’d take the Amtrak up, but now I drive up. I’m single, I don’t have any kids, so it’s not as bad for me as it would be for other members.

Favorite restaurant? I don’t necessarily have any. There is actually a good barbecue place called Capital Q [Smokehouse] though, over on Ontario (Street). That’s a pretty good. Wings over Albany is another good place. The normal stuff out on Wolf Road, by the mall, you have Cheesecake Factory and Texas Roadhouse, all those places.”

Obviously, as time changes, there are new issues, that I’ve lived with myself. Like loans, for example, student loans. I’ve lived it, so I know all about it. Members who have been there 20 years, they may have loans too, but they haven’t had the same experience that I’ve had. So, it’s always good to have a good mixture of good backgrounds and ages, and it definitely comes into play. It’s definitely helpful to represent “

GG: In your district it’s particularly stark. You beat out a nine-term incumbent, and the uproar over the Maspeth homeless shelter certainly played a role. Housing issues are important to you. What are your thoughts on addressing homelessness, and more broadly, the city’s affordable housing shortage?

My bill, it’s sponsored by Senator [Michael] Gianaris in the Senate, and we have about 22 co-sponsors in the Assembly. When they want to build “affordable housing,” they have to use the AMI of only the zip code where the project is located. If they build in Harlem, only the average income levels of people in Harlem will be considered. Not Westchester, not Rockland County, not Putnam County -- that’s just stupidity. In my opinion, not only does it help people in the community, but it deals with the homeless issue. That’s another reason why I supported Assemblyman Andrew Hevesi’s home stability plan. Because it keeps people in their homes. It keeps people who are in danger of losing their homes -- it would give them a subsidy which would help keep them in their homes.

If anyone says, ‘We shouldn’t take care the homeless,’ that’s idiocy. No. You’ve got to take care of everyone. You’ve got to take care of people in the state. If you are worried about the money part of it, then even more you should support Andrew Hevesi’s plan. Because the plan would save the city and the state millions of dollars. Instead of paying market rate -- they are charging $200 a night, to put someone in a hotel, like a paying customer -- instead of that you could spend a little bit of money and keep people in their homes.

So, the ideas are there, but the laws are not passing.”

GG: That leads me to my next question. Have you found it challenging to make your voice heard as a freshman legislator with such a large conference?

BB: There’s a big conference, a lot of people who have been there for a long time. And everyone’s been great, everyone’s been very nice, but there are people who have been there longer and have more pull -- that’s just the way it goes -- or their bills have been out for a long time. Some of these bills have been out there for 10 years and they are still trying to pass them. What I’ve done is draft the bills myself -- it’s one of the benefits of being a lawyer, I draft my own bills -- and then I just go speak to the members. You talk to them. Obviously the affordable housing issue is all over...I go over and ask them if they’ll sign on to the bill and about 20 members have signed on so far -- to the affordable housing one -- you’ve just got to put the legwork in.”

BB: “I think the biggest annoyance is when a constituent needs help and you want to help them but you have to go through the agencies. It’s always a traffic signal, or a stop sign, or a speed bump, where it’s needed, right? And the constituent wants it, but you can’t just snap your fingers and make it happen. You have to go through the agency and the agency has to approve it. That’s frustrating. Sometimes obviously it doesn’t work out because the agency says ‘No, you can’t have the traffic light here.’

In regards to Albany, honestly the budget process was certainly long, but I don’t have a problem with that. In my opinion, it’s better to negotiate and negotiate and negotiate, instead of just doing the deal for the sake of doing a deal. I understand that [Governor Andrew] Cuomo likes to have his budget on time. But the budget shouldn’t be on time just to be on time. The budget should be thought out and reasoned and debated, I mean that’s the reason we have government. While it does take a while, and this one was extra special with how long it took to get done, I don’t have a problem with that.”

GG: As a lawyer, negotiating is your forte?

BB: “Exactly. It’s a negotiation. You’re not always going to get what you want, you negotiate, you come to an agreement, and live to fight another day.”