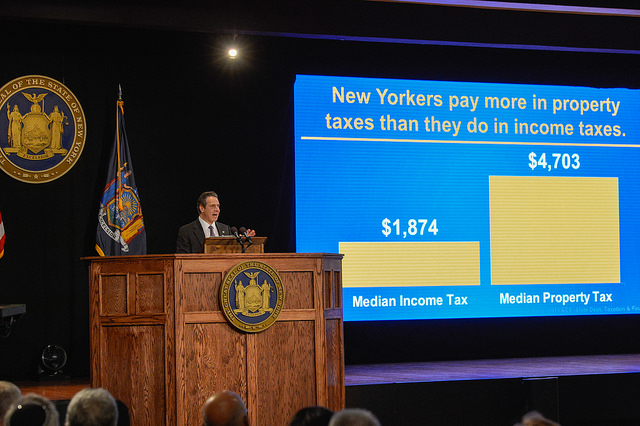 A new state budget was passed in April in typical Albany fashion: with almost no time for public scrutiny of the bills or proper review by the legislators who quickly voted them through. Since the $153.1 billion budget was passed, watchdogs both in and out of government have released analyses, helping to better inform citizens and increase accountability.

The budget was adopted a little over a week into the new fiscal year, which begins April 1, after compromises were reached among legislative leaders and Governor Andrew Cuomo on contentious issues such as raising the age of adult criminal responsibility, education aid, a college tuition affordability program, the allocation of large sums of affordable housing monies, and more. The frantic and secretive nature of state budget adoption leaves a lot to digest afterward.

Now, about two months after the budget was passed, those analyses by watchdogs can bring to light a few common themes and several other key points.

Aside from general criticism of the process itself, there are the issues of the large lump sum appropriations, projects funded by mysterious sources, and the governor faulty marketing of his budgetary discipline.

Comptroller Tom DiNapoli
State Comptroller Tom DiNapoli released a report on the state budget that includes critiques of the budgeting process and the end result. The budget continues to rely heavily on appropriations from the federal government, at almost a third of state revenue, despite the unpredictability of state aid from Washington, D.C. under President Donald Trump and the Republican Congress.

“Although the budget came together more than a week into the fiscal year, the Legislature and Executive acted on critical budget issues that will help New York move forward,” DiNapoli said in a statement. “However, billions of dollars in spending lacks key details that would better inform the public about how their tax dollars are being spent.”

The Comptroller’s report included a lengthy chart showing the legislature’s inaction on ethics reform, criticizing the fact that, among other things, the budget “intentionally omits” measures such as requiring advisory opinions on legislators’ outside income, closing the LLC loophole in corporate political contributions, and extending the Freedom of Information Law (FOIL) to cover the Legislature. The Comptroller was equally pointed on the state’s procurement practices, which have come under fire due to rampant corruption in the state’s contracting process, stating that the changes were needed to “ensure spending accountability and transparency” in a statement. A measure to authorize the IG to investigate criminal wrongdoing in the state’s procurements was intentionally omitted.

The Comptroller was critical of the quickness of the process, essentially disallowing public review. Also criticized was the prevalence of lump sum appropriations, which can make state money harder to track.

“It should concern all New Yorkers that budget decisions in Washington may force tough fiscal choices for the state and raise new questions for local governments and nonprofits that rely on state funding,” DiNapoli said. “Federal actions that could adversely affect New York, as well as economic uncertainty, are key risks to this budget.”

Citizens Budget Commission
In a statement on the day the budget was adopted, CBC President Carol Kellermann said “achieving a fiscally sound budget is more important than an ‘on time’ budget,” referring to the emergency budget extender passed when negotiating parties couldn’t reach a deal on time. Still, CBC expressed dismay that the state budget was neither on-time nor fiscally sound.

In a later report, CBC also criticized Governor Cuomo for misleadingly saying that the adopted budget continued his “record of holding State Operating Funds spending annual growth to no more than 2 percent.” In reality, CBC explained, spending growth is closer to 3.7%, well above the 2% benchmark that Cuomo prides himself on. The budget is able to exploit this loophole by not “adjusting for payment timing differences and accounting changes,” such as through premature debt service payments or “shifting expenditures out of state operating funds spending.”

CBC has created a “budget navigator” to allow citizens to see how city and state money is being spent.

Empire Center for Public Policy
Empire Center, a conservative think tank based in Albany, has released a slew of criticisms of the budget. Condemnations expressed on the Empire Center blog cover health care spending, certain tax breaks, and the “free” college tuition program. Empire Center is also critical of the added tax deduction for union dues, “effectively a $35 million gratuity for an already privileged caste of (mostly government) workers.”

“The positives in New York’s FY 2018 budget make up a pretty short list—while the negatives are in some respects worse than usual,” wrote E.J. McMahon, Empire Center’s founder and research director, in a budget breakdown post on the Center’s blog.

McMahon argues for more transparency and accountability with the Water Infrastructure Improvement Act, which he says “used to be put before voters in New York.” Now that doing so is no longer a requirement, McMahon writes, “the governor and Legislature obviously figure, why bother?”

Citizens Union
Citizens Union identifies the budget’s large non-specific lump sum funding in its “Spending in the Shadows” report. The watchdog identified nearly $13 billion in the budget in nonspecific funding: around $3 billion “subject to decisions of one or more particular elected officials,” and nearly $10 billion “in approximately 40 different economic development and infrastructure pots listing no official with spending authority.” The group also found that there was “inadequate reporting as to how these funds are eventually spent.”

Citizens Union calls on the governor and Legislature to publicly identify all nonspecific funding and to publicly disclose information, such as purposes and the requester, regarding these funds, especially ahead of spending, not afterward as is often the case. Further, the organization calls for amending state finance law to introduce accountability and conflict-of-interest identification to public contracting, the disclosure of grants and contracts “awarded under nonspecific lump sum appropriations and reappropriations,” and for “aging the budget bills for three days.”

Reinvent Albany
Reinvent Albany has focused largely on procurement reform, which has become a major point of contention, particularly after the Buffalo Billion corruption scandal broke. Along with other watchdog groups, Reinvent Albany issued a release in May calling for “five clean contracting reforms,” all of which failed to make it into the budget:

1. Require competitive and transparent contracting for the award of state funds by all state agencies, authorities, and affiliates. Use existing agency procurement guidelines as a uniform minimum standard.

3. Empower the Comptroller to review and approve all state contracts over $250,000.

4. Prohibit state authorities, state corporations, and state non-profits from doing business with their board members.

5. Create a ‘Database of Deals’ that allows the public to see the total value of all forms of subsidies awarded to a business – as six states have done.

The groups have continued to call for such reforms, but legislative leaders have been hesitant to challenge Cuomo, who is opposed.

New York Public Interest Research Group
NYPIRG also criticized the opacity of the state budget process, which notorious for taking place largely behind closed doors, especially in terms of the final, major deals reached, with the infamous “Three Men in a Room” process determining what stays and what goes -- largely without public input. (There’s been a fourth man in the room of late given the addition of IDC Leader Jeff Klein along with the governor, Assembly speaker and Senate majority leader.)

“The process by which these decisions were made was awful and arguably worse than in the recent past,” said the organization in a statement shortly after the budget’s passage. “Virtually all the deliberations in developing the budget were conducted behind closed doors. There were no hearings, no open meetings, and with the three day legislative review period waived by the governor lawmakers were voting on bills that they had little time to comprehensively review.”