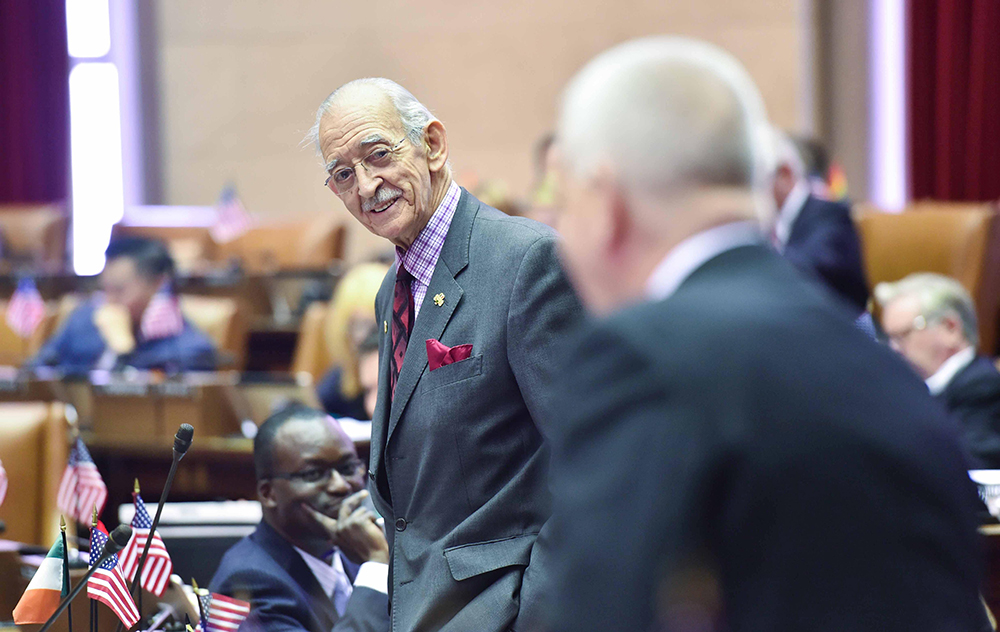 When Assemblymember Herman “Denny” Farrell, who heads the chamber’s Ways and Means Committee, announced he would not seek reelection next year, it set off a murmur about who might succeed him in the powerful -- and lucrative -- committee post.

Farrell, a Democrat elected to the Assembly in 1974 and the third longest serving member of the body, is known for his diplomacy and good natured bantering with Republicans and Democrats alike during budget hearings and on the Assembly floor.

Well-liked among his peers and beloved in his community, Farrell -- who represents Harlem, Washington Heights and Inwood -- was recognized by the Legislature last week, when it voted to rename Upper Manhattan’s Riverbank State Park after him as part of a special legislative session dealing with mayoral control over schools.

Governor Andrew Cuomo also honored the Assembly member at a breakfast at the Executive Mansion on June 20, speaking in eulogistic terms of Farrell’s time in the Assembly and as former chair to both the Manhattan and State Democratic Parties.

“Denny also taught me politics was the means to the end, and that was getting into government to achieve power…not power you would use personally, not power to take care of some donors, to take care of some unions, to take care of the political complex — power to do good things for your people and for your community,” Cuomo said, according to a recording of his remarks obtained by Politico New York. “Government is about accomplishing things for people and making their life better. Everything else is bull----.”

While Farrell’s current two-year term is set to officially end at the end of 2018, the grand farewell he received in Albany and other indicators have signalled to many in Harlem that he plans to resign before January, when the Legislature is next due back in the capital. The move would virtually ensure the party nomination of his chief of staff, Rev. Al Taylor, in a special election, according one Harlem insider who spoke to Gotham Gazette on the condition of anonymity. For special elections to the state Legislature, the borough party committees name the party representative on the ballot.

“His departure is something that a lot of people Uptown are talking about. Farrell is putting a lot of his energy and political assets into his chief of staff, Al Taylor. Wherever Denny is, Al is nearby,” the insider said, noting that the Assembly office’s most recent quarterly newsletter featured Taylor more than Farrell. “All the signs point to Farrell's resignation being imminent.”

In addition to Taylor, Juan Rosa, a former City Council staffer and community activist, is considering a run for the seat, according to multiple people familiar with the district.

Farrell, who did not return a request for comment, has not confirmed any plan to vacate his Assembly seat before January 2019, when his term would officially end.

If Farrell does indeed leave before the end of the year, not only would Taylor have the inside track to the Assembly, but Assembly Speaker Carl Heastie would name a new Ways and Means chair, the top Assembly budget post below the Speaker, before the next budget season in Albany -- a move that would likely prompt a series of new committee chair appointments throughout the Assembly for the 2018 session.

“When you make one change, you make 30 changes. That is always the part that outsiders don’t understand,” said former Assemblymember Richard Brodsky. “Part of the calculus that any Speaker makes is not just how to fill that position, but how it will affect the entire food chain.”

As capital watchers have noted Farrell’s imminent departure, it has also become apparent that several female legislators are in line for the committee leadership job -- a post no woman has ever held before.

While new leadership appointments are made every year by the Speaker, the Ways and Means chairship is arguably the most powerful and well-paid committee position in the Assembly. It is also arguably the most challenging, as the committee is tasked with budget hearing leadership and examining any legislation considered by the body that has a fiscal component.

The position comes with a significant stipend. On top of the standard $79,500 legislative salary, the Ways and Means chair earns $34,000, on par only with the $34,500 stipend received by the Assembly Majority Leader, currently Joseph Morelle, of Monroe County. Other committees, such as Codes and Education, may deliberate over a comparably high volume of bills, but come with a stipend of $18,000 each. The Ways and Means chair also has access to a significantly larger staff than any other chair in the Assembly.

Geography and seniority have long played a role in who is selected for both leading Ways and Means and other top committees. For Ways and Means, other factors typically considered include knowledge of the budget process, diplomacy, ability to get along with Republicans in both legislative houses, and the stamina to sit through many hours of annual budget hearings.

The longest serving member of the Assembly is Richard Gottfried, of Manhattan, who is followed by Assemblymember Joseph Lentol, of Brooklyn. Gottfried, who has headed the Assembly Health Committee for more than 30 years, told Gotham Gazette he has expressed to Heastie and previous speakers that he is not interested in leading Ways and Means.

“I almost can't imagine how lucky I am to have had this job; it is just about a dream position for me,” Gottfried said of leading the Health Committee. “I love being able to focus on health policy and consider myself enormously happy to have this job.”

He noted that the Speaker must ultimately assess the person’s ability to speak on behalf of the Assembly majority's view of the budget and be someone who can represent the diverse views of the Democratic Conference.

“The speaker has to be concerned with, among other things, maintaining the solidarity and cohesion of the Democratic Majority because there are always a lot of forces eager to pick us apart,” said Gottfried, who is currently focussed on trying to see single-payer health care passed in New York.

An obvious choice for Heastie might be Lentol, the second most senior member of the Assembly, who has held his seat since 1972 and has served as chair of the critical Committee on Codes since 1992. Lentol competed against Heastie in the race to replace former Speaker Sheldon Silver in 2015, as did Assemblymember Catherine Nolan, of Queens, the sixth longest serving Assembly member. Lentol did not return a request for comment on whether he was interested in the Ways and Means position.

Assemblymember Robin Schimminger, who represents a swing district encompassing Niagara and Erie Counties, follows Lentol and Farrell in seniority, but his district geography and more moderate place on the political spectrum could rule him out for such an influential position in the New York City-focussed conference.

While women have historically been underrepresented in the Legislature, including in leadership positions, for the first time in history, several are in the mix for the Ways and Means post, including Nolan, who was first elected in 1984, Assemblymember Helene Weinstein, of Brooklyn, who is the fifth longest serving member of the Assembly, having been elected in 1980, and others.

Female Assemblymembers Vivian Cook, of Queens; Earlene Hooper, of Nassau County; and Deborah Glick, of Manhattan, also rank among the 15 longest serving lawmakers in the 150-seat chamber. Glick has the distinction of being New York's first openly gay person elected to the state Legislature. She has been outspoken on a range of progressive issues and chairs the important Higher Education Committee.

Seniority withstanding, Heastie has made an effort to provide leadership opportunities to newer members in a way his predecessors did not, according to members of the Assembly who spoke to Gotham Gazette.

“I think we have noticed that under this leadership [Speaker Heastie] has managed to bring a few new members, who have only been here a few months, to be chairmen of committees and subcommittees. It has never happened before. You know, it took me 20 years to get a chairmanship myself,” said Brooklyn Assemblymember Félix W. Ortiz, who chairs the Cities Committee and serves as Assistant Speaker.

He may also consider factors like gender, race, political beliefs, and other elements of diversity in making his decision.

“Geography used to matter, but once you open up that door of identity, lots of people walk in. The Assembly is blessed with about 15 people whose seniority and talent and experience is considerable, it’s going to be hard for [Speaker Heastie] to make a bad choice,” said former Assemblymember Brodsky, who chaired both the Committee on Environmental Conservation and the Committee on Corporations, Authorities and Commissions during his nearly three decades in Albany.

A spokesperson for Heastie did not return a request for comment, nor did the offices of Assembly Members Nolan, Weinstein, Lentol, and Schimminger.