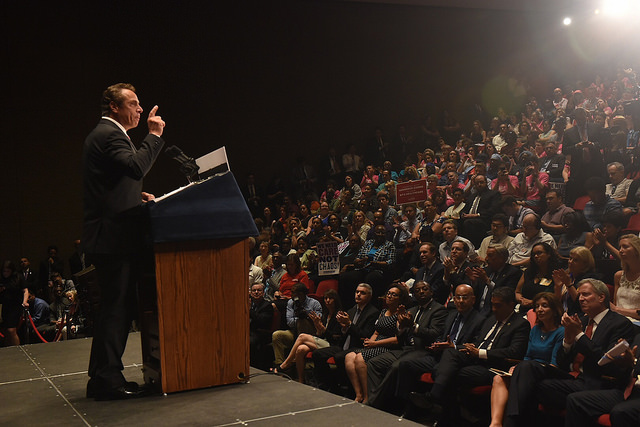 At a packed auditorium at Mount Sinai Hospital Monday afternoon, four of the state’s top elected Democrats united in a show of force to rally against a common enemy: the Republican-led U.S. Senate’s bill to repeal and replace the Affordable Care Act, more commonly known as Obamacare.

(Although a procedural vote on the bill was meant to be delayed until after the return of Sen. John McCain (R-AZ), who is recovering from surgery to remove a blood clot above his left eye, the bill seemed dead on arrival when two more Republican Senators said Monday night that they would oppose it.)

“We're going to pay three times more to take care of the people in the emergency rooms than we would have paid if we'd actually given them healthcare,” said Cuomo of the Senate proposal, kicking off the rally.

Schneiderman, following Cuomo’s lead, promised that if the BCRA passed, “I will go to court to challenge it. I will sue the Trump administration.”

[Related: Focused on Fighting Trump, is Schneiderman Looking Away from Albany Reform?]

Cuomo blamed a rising “ultraconservative ideology” in Washington D.C. for ensuring that Senate Republicans were “not talking about changing health care for all americans, they're talking about changing healthcare for poor americans.” He reserved particular derision for the Faso-Collins amendment, an addition to the Senate bill from upstate GOP Reps. John Faso and Chris Collins that would move Medicaid costs from the counties to the state, calling it an “old-fashioned con game.”

The amendment, which Faso and Collins hope will reduce local property taxes, would explicitly only apply in the state of New York and has not been a focus of the national conversation around the Congress’ attempts to overturn Obamacare. But it has become a central flashpoint in New York as state officials balk at a provision that would cut $2.3 billion in federal funding if the state fails to pick up the Medicaid tab. Schneiderman, who called the whole bill “unconstitutional,” went so far as to single out that provision and referred to Collins and Faso as “two people who supposedly represent New York.”

Mayor de Blasio made no mention of the amendment, but instead focused on the unity displayed by elected officials, labor, and business. The mayor himself has repeatedly butted heads with the governor in the past and has seldom been seen at public events with him. The mayor said that the majority of Americans rejected the healthcare bill, and “what's happening in the USA today is spitting in the face of that majority.” On Monday, the mayor urged New Yorkers to spread the message across the country, telling their friends to call their senators. “We all know where those swing votes are,” he said.

The four Democrats also warned of threats to state hospitals should the Republican bill pass, with Heastie asserting that New York has the “greatest healthcare delivery system in the nation, and to punish us because we deliver the best healthcare is unconscionable.”

He echoed the governor, who had raised the spectre of “bankrupt hospitals” and 1.2 million healthcare jobs being jeopardized in the state. “It means 20 percent of the state economy that is healthcare would be devastated if these cuts went through,” Cuomo said.

Monday’s rally was purportedly the launch of a renewed push to defeat the unpopular Senate bill, which already seems to be on its last legs. Schneiderman called the effort a coalition that would be led by the governor over the coming weeks with the intent of “sending this disgusting, anti-health bill on a one-way trip to the trash heap of history.”