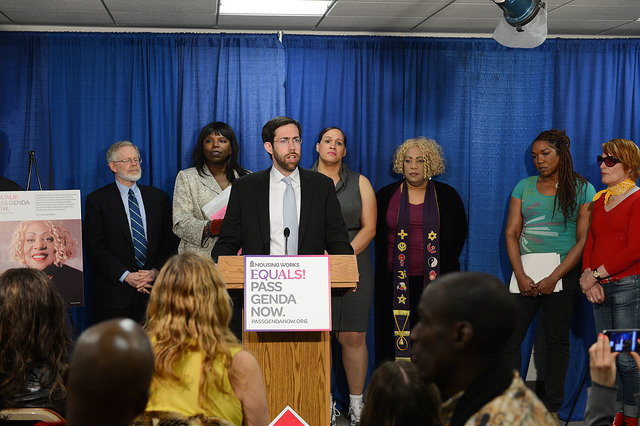 In early April, during the final throes of state budget negotiations, state Senator Daniel Squadron introduced a hostile amendment on the Senate floor to the Public Protection and General Government state budget bill. The amendment was intended to close the so-called “LLC loophole” in the state’s campaign finance law, which allows limited liability companies, often with hidden owners, to pour virtually unlimited money into political campaigns.

It was hardly the first time Squadron and his fellow minority Democrats tried to force the chamber to consider the bill, which, despite broad support from the public, had never been brought to the Senate floor.

"Year after year, indictment after indictment, conviction after conviction, the Senate Majority has refused to take action to close an indefensible loophole,” said Squadron on the Senate floor, echoing his remarks from previous sessions. It would also be his last effort as a senator to close the notorious loophole, which factored in the corruption convictions of both state legislative leaders Sheldon Silver and Dean Skelos in 2015.

On Wednesday, Squadron, who was first elected in 2008, abruptly announced his resignation from the Senate. He signed off with an op-ed in the New York Daily News, describing how he had grown disillusioned by the dysfunction in Albany.

“Over the years,” Squadron wrote, he watched the government’s potential “thwarted by a sliver of heavily invested special interests.”

“In the state Senate, for example, Democrats have repeatedly been denied control of the chamber by cynical political deals, despite winning an electoral majority — including in 2016,” he added, referring to the eight-member Independent Democratic Conference, which has a power sharing agreement with the Senate GOP, and Senator Simcha Felder, a nominal Democrat who conferences with Republicans to control the chamber.

Squadron’s white whale, the LLC loophole, was created by the Board of Elections in 1996 and treats limited liability companies like individuals, allowing them to donate $60,800 in a year to political campaigns at the state level. Corporations, in comparison, are only allowed to contribute a maximum of $5,000. Elected officials, both Democrats and Republicans, have benefited from the loophole.

In 2015, Squadron joined Democrats Senator Liz Krueger and Assemblymember Brian Kavanagh and the Brennan Center for Justice as co-plaintiffs on a lawsuit filed against the state Board of Elections in 2015 to end the loophole. The case, though initially dismissed, was appealed on June 27.

Over the last two decades, New York’s lax campaign finance laws have resulted in statewide candidate and party coffers being flooded with millions in LLC dollars. LLCs donated $54.2 million to candidates, parties, and traditional PACs between 2011 and 2014, and more than $118.6 million between 1999 and 2014, according to a 2015 Board of Elections analysis by the Hedge Clippers, an activist organization backed by a coalition of unions and progressive groups that highlights the corrosive effect of big money in politics. A 2013 report by the now defunct Moreland Commission to Investigate Public Corruption identified one group that had “utilized 25 separate LLCs and subsidiary entities to make 147 separate political contributions totaling more than $3.1 million since 2008.”

Governor Andrew Cuomo, a second-term Democrat, has been possibly the biggest beneficiary of the LLC loophole while at the same time calling for a cap on LLC donations. In the most recent campaign finance filings, Cuomo raised $5.1 million in contributions between January and June, with more than $500,000 from LLCs.

Squadron, in addition to pushing for closure of the LLC loophole, defined himself as a voice for other good governance measures, championing the enactment of term limits and restrictions on outside income. His persistent but respectful questioning of his Republican colleagues on the lack of movement on the bills marked each session, to no avail. This year’s hostile amendment, like other attempts that had come before it, failed.

“And the status quo has proven extraordinarily durable: It barely shuddered when the leaders of both legislative chambers were convicted of corruption,” Squadron wrote in the Daily News, referring to Silver and Skelos.

Alarmed by the nationwide shift towards “Trumpism,” Squadron said in an interview that he was presented in July with the opportunity he couldn’t refuse: to join entrepreneur Adam Pritzker and Jeffrey Sachs of Columbia University on a national campaign effort. He said the timing of his resignation was to ensure that his seat, which is safely Democratic, would be filled on November 7, Election Day. It is a city election cycle; state legislative elections are slated for next year, so the process for replacing Squadron is different from a typical election.

But despite his frustration with the “cynical dealmaking” he witnessed in Albany, when asked about supporting a constitutional convention, which many reformers say is the only way to move these issues, Squadron was lukewarm.

Once every 20 years, New Yorkers have the opportunity through a ballot referendum to vote to call a constitutional convention, including this Election Day. If called, delegates will be chosen from each Senate district, and the following year a convention aimed at modernizing and updating New York’s lengthy and arcane constitution will commence. Any changes produced by the convention will return to voters the following year.

"I think there is a lot of promise in a constitutional convention, if it’s done in the right way,” Squadron said. “[T]he Con Con and gaining a Democratic majority are two ways to push the fundamental reform."

Many have taken note of the abrupt nature of Squadron’s departure, which triggers a special election without a competitive primary -- the Democratic nominee will be chosen by party insiders, not voters.

The rebuke was swift and harsh, including from the paper Squadron chose to place his farewell. “Last month we rapped Councilman David Greenfield for leaving office to take a new job after claiming a spot on the reelection ballot — putting sole power to pick a successor in his own hands,” wrote the New York Daily News editorial board. “State Sen. Daniel Squadron just made a similar move that will arrogantly deprive some 300,000 people in his Brooklyn and Manhattan district of a chance to decide who serves them. And deprive who knows how many would-be public servants of the chance to make their case to the voters.” The move, the board noted, was particularly “rich” considering Squadron had built a reputation as a reformer.

Squadron, in a phone interview with Gotham Gazette, defended the timing of his decision noting that even if the opportunity had presented itself earlier, it would have been unfair to leave his constituents without representation for part of the legislative session. Had he resigned following the extended session that ended in late June, the move would have allowed Senate hopefuls just a week to collect 1,000 petitions required to get on the ballot -- hardly a more democratic option, he said.

Squadron represents the 26th Senate District, which includes neighborhoods along the Brooklyn waterfront, from Greenpoint to Carroll Gardens, and a significant chunk of lower Manhattan, reaching as far as Washington Square Park. According to state election law, when an intercounty special election is called, the party nominee is decided by leaders of both counties, in this case chair of Brooklyn Democrats Frank Seddio and Manhattan Democratic Party boss Keith Wright, according to spokespersons for both organizations. If Democratic leaders decide on a “weighted vote,” then Squadron’s successor will effectively be decided by the Manhattan party, since Brooklyn only accounts for one-third of the district.

A spokesperson for the Manhattan Democrats said that the organization's internal policy is to include its own committee members in choosing nominees, and that a convention will likely be called for early September -- a nominee must be selected by September 21. How the outcome of that vote will be reconciled with the wishes of the Brooklyn’s Democratic leadership remains unclear.

“Frank [Seddio] and Keith [Wright] have spoken and are going to get together to decide on a process for replacing Squadron,” said George Arzt, a spokesperson for the Brooklyn Democrats, noting that Seddio was mourning the recent death of his brother.

Squadron has acknowledged that the intercounty special election process is inherently flawed, allowing the Democratic county chairs to effectively choose his successor (since a Republican nominee has no chance of winning the seat), and has written a letter to both party bosses, requesting that county committee members, representatives selected from each election district, be included in the process.

“To disenfranchise Brooklynites would be unfair and undemocratic. I strongly urge you to make this process as democratic as possible: to allow a full vote of the County Committee across both Manhattan and Brooklyn, and to be bound by its result,” he wrote in the letter, indicating that because more of his district is in Manhattan, that county machine may have been able to dominate the process.

Assembly Member Kavanagh, a fellow reformer whose district overlaps with a small part of Squadron's Senate district, quickly announced his candidacy for the seat. Other names being floated include Assembly Member Yuh-Line Niou, who indicated she is exploring a bid, and Lincoln Restler, an aide to Mayor Bill de Blasio, who has led anti-machine reform efforts in Brooklyn.