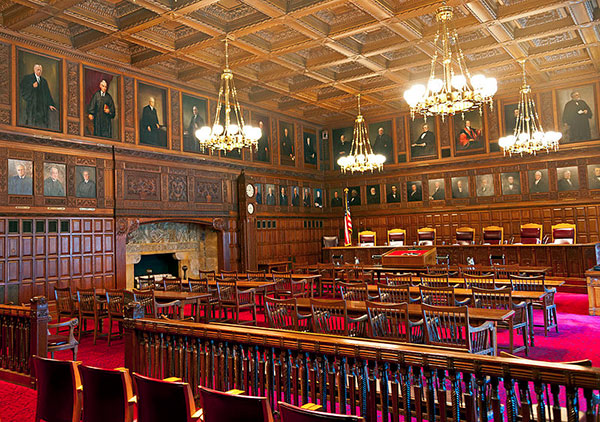 The State Court of Appeals (wikicommons)

District leader races typically receive scant media coverage or scrutiny from the state’s Board of Elections investigative division. Disagreements over candidate petitioning for the unpaid, party position are typically settled by borough Board of Elections officials and occasionally advance to a county-level Supreme Court. However, this week, a dispute over the validity of what amounts to 12 signatures for a pair of Harlem district leader candidates -- an incumbent and a newcomer sharing a slate -- is headed to the state’s highest court.

On Wednesday, the New York State Court of Appeals in Albany will consider whether to examine if multiple New York Supreme Court judges were justified in unanimously reinstating Norma Campusano and Daniel Clark to the ballot for September’s Democratic primary. This, after the candidates were booted off the ballot by the Manhattan Board of Elections due to what its officials deemed a valid signature challenge from Campusano and Clark’s political opponents.

A district leader ballot petitioning case reaching the state's highest court is an extraordinary rarity, but the particulars of this conflict can be traced to the type of often-divisive county party politics that dominates elections for virtually every elected position.

The role of district leader comes with limited official power. These party officials play a role in engaging voters, nominating civil judicial candidates, making formal party endorsements, appointing paid poll workers, and voting for the county Democratic Party chair position, currently held in Manhattan by former Assembly Member Keith Wright. In Manhattan, Assembly Districts are often divided into two to four parts, with each party electing a male and female district leader. Each of Manhattan’s 12 Assembly districts gets 24 votes for party boss, and each district leader is granted an appropriate fraction of that vote.

In West Harlem, Campusano is running for female leader for Assembly District 70, Part D, alongside Clark, an incumbent who was previously a political ally of Wright, but is not being supported by Wright now. The incumbent female district leader, Alicia Barksdale, is running for reelection in the same district, and had been joined by Vernon Williams for male district leader, but he was knocked off the ballot, according to Barksdale. Barksdale said she has not received support from Wright in her reelection bid, despite indication from Wright's spokesperson that she has.

Corey Ortega, who worked for Wright in the New York State Assembly, and Gricel Ortiz-Thompson are running together for male and female district leader, respectively, and they have been waging a relentless campaign to knock Clark and Campusano off the ballot. Wright has signaled tacit support for Ortega given his purported neutrality in the male district leader race.

The district is important to Wright, as it is in his backyard (he previously represented the 70th Assembly District), and losing any district leaders there could signal waning support for his leadership and have a ripple effect across the county. While the Democratic party in Manhattan has always been fractured, Wright has been well-liked, but has had a difficult few years. In 2016, he lost a contentious Democratic primary for his retiring mentor Charles Rangel’s congressional seat to rival Adriano Espaillat, then a state Senator, and now he is facing blowback for accepting a job at a prominent lobbying firm following his years as a state legislator. Wright followed through on a promise not to run for reelection to the Assembly if he lost the congressional race.

In July, Clark and Campusano submitted nearly 2,000 ballot signature petitions, four times the 500-signature minimum for district leaders. The Board of Elections initially invalidated approximately 1,512 of their signatures, leaving them with 488 signatures – 12 short of qualifying for the ballot.

Clark and Campusano were kicked off the ballot by the Manhattan Board of Elections, in proceedings overseen by Deputy Chief Clerk William Allen, himself a Democratic District Leader in the neighboring AD 70 Part A and a close ally of Wright.

New York County Supreme Court Judge Carol Edmead reinstated Clark and Campusano on the ballot on August 11, writing that “the defects alleged in the pleadings are di minimus,” an abbreviation of a Latin doctrine referring trivial matters not worthy of the court’s scrutiny. Four days later, Ortega and Ortiz-Thompson formally retained leading election attorney and former state Senate Minority Leader Marty Connor to block their opponents from getting on the ballot.

On August 17, Connor filed an appeal with the First Appellate Division of the New York County Supreme Court, but on August 23, the seven-judge panel “unanimously affirmed” the original court ruling placing Clark and Campusano on the ballot, noting they had been “erroneously invalidated by the Board of Elections.”

Connor wrote to the New York State Court of Appeals, requesting that the state’s highest court hear an appeal, and will defend the motion in Albany on Wednesday.

Arthur Greig, the election lawyer representing Clark and Campusano, told Gotham Gazette that it is highly unusual for a run-off-the-mill signature challenge to reach the state’s highest court.

“Typically, you’ll see people slugging it out in City Council races, where you see they have raised and spent $10,000. But for an unpaid, party position, it’s virtually unheard of,” said Greig.

An election case that reaches the appellate courts can cost clients between $5,000 and $15,000 in attorney fees, according to Greig -- a hefty price tag for a chance to be elected to an unpaid position.

Greig says he has been paid by Clark and Campusano (though he declined to disclose how much), who opened a campaign fundraising account in late August, presumably to help meet their legal fees and will be obligated to file an “11-day pre-primary” financial disclosure with the state Board of Election on September 1 or “10-day post-primary” disclosure by September 22, depending on when the account is processed by the BOE.

It is also unclear who is paying for Ortega and Ortiz-Thompson’s challenge. While Ortega has an active campaign committee, it has not filed a required BOE campaign finance report since July 2016.

Ortega and Ortiz-Thompson formed a joint election committee that does not designate the office they are respectively seeking on April 20, 2017, but have not filed the required periodic filing due July 17, 2017 or the 32-day pre-primary filing due August 11, 2017.

When asked why he was pursuing such an aggressive tactic, Connor said, “I’m a lawyer; I do what my client tells me.” When asked whether he was being paid by Ortega and Ortiz-Thompson, Connor said, “It’s none of your business whether someone is paying me or not.”

The New York County Democratic Committee last filed last month, in July 2017, reporting $37,161.86 cash on hand. Because the committee is a “housekeeping” account, it is prohibited from spending funds to influence the outcome of specific campaigns, instead it is required to only spend on party building activities.

Connor’s history as a state senator is also newly relevant considering the recent resignation of Senator Daniel Squadron -- who defeated Connor in the 26th Senate District in 2008 --- triggering a special election process where Connor’s name has been floated.

Last week, Gothamist’s Ross Barkan reported that Connor may be seeking the party nomination from Wright for the election that will determine who serves the remainder of Squadron’s term. Connor’s work in aiding an ally of Wright to defeat political opponents in a district leader race of particular concern to Wright could help tip the scales in Connor’s favor.

Since the Senate district encoumpasses parts of lower Manhattan and brownstone Brooklyn, Wright and Brooklyn Democratic Party boss Frank Seddio are charged with negotiating the Democratic nominee, which in the Democrat-heavy district is akin to choosing Squadron’s successor. While the majority of the district is in Manhattan, a spokesperson for the Brooklyn Democratic Party noted to Gotham Gazette that the seat has historically been held by a Brooklyn resident, and choosing a Brooklynite as Squadron’s successor is important to the party.

Sources told Gothamist that Connor, who is from Brooklyn, could be selected as a compromise to serve out the remainder of Squadron’s term. When asked about being potentially selected by party bosses for the nomination, Conner was coy.

"I have no idea what people are saying, but that would be interesting, wouldn't it?" He told Gotham Gazette, adding, “It's nice to be thought of after all these years.”

Others vying for the seat are Assembly Member Brian Kavanagh whose Manhattan district slightly overlaps with Squadron's Senate district, and Paul Newell, a lower Manhattan activist who has run for state Assembly multiple times. Lincoln Restler, an aide to Mayor Bill de Blasio who has been active in Brooklyn Democratic circles, has also been rumored.

The Democratic primary election for Manhattan district leaders and many other seats is September 12. The general election, which will include the special state Senate election, is November 7.

EDITOR'S NOTE:
This article has been updated multiple times, in part due to misinformation provided by a spokesperson for County leader Keith Wright, who took issue with the original version of the story that indicated Wright was not supporting Alicia Barksdale for reelection as female district leader. Gotham Gazette amended the article to include word of Wright's support for Barksdale, per the spokesperson, Barry Weinberg.

When Barksdale read that updated version of this article that indicated Wright was supporting her reelection, she wrote Gotham Gazette to say, "Your article was news to me. I did text him to thank him if it was true but no response...so I know it isn't true of his support."*

Weinberg, president of the West Harlem Progressive Democratic Club, helped the Ortega and Ortiz-Thompson ticket gather ballot petition signatures and served as witness on them, but told Gotham Gazette he did so on his own accord, not as a representative of Wright or the county party, where he serves as executive director.

On Wednesday, the Court of Appeals declined to revisit the challenge to Clark and Campusano, so they will appear on the ballot September 12.

*Another update: not long afer the addition of this editor's note, Barksdale wrote Gotham Gazette to say that Wright had called her and given his support and endorsement to her campaign.