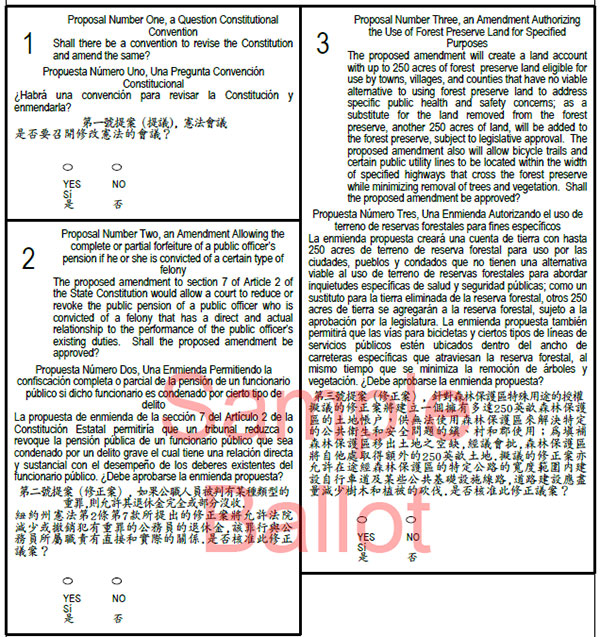 (Image via NYC Board of Elections)

This November, New York voters will have the opportunity to vote “yes” or “no” on three ballot questions, each important in its own way. While the Constitutional Convention -- question number one -- has soaked up most of the ballot initiative press, New Yorkers get to weigh in on questions concerning stripping pensions from corrupt public officials and utilization of some protected forest reserves for essential infrastructure projects.

As Election Day approaches, familiarize yourself with the three ballot questions, and don’t forget to turn your ballot over when you go to vote November 7!

If approved, voters would select delegates to the convention on Election Day in November 2018 -- three delegate per state Senate district, for a total of 189, and 15 at-large delegates across the state. They would then convene to discuss potential amendments and submit recommendations, which would then be put up for a final popular statewide vote in November 2019. If approved, the constitution will be amended. The proposals could be put to voters as a full package, like in 1967, or piecemeal, which many say is preferable.

During the last referendum, in 1997, voters rejected a Con Con 63-37. The last convention, held in 1967, was actually called by the Legislature, not voters, and did not result in constitutional amendments as voters opposed the slate of proposals that came out of the convention. The last convention to result in amendments took place in 1938, after voters chose to call a convention in 1936, amid the Great Depression.

Many on the “yes” and “no” sides actually agree on the need to update the constitution and to pass certain reforms -- like updates to the state’s antiquated voting laws -- that have not made it through the state Legislature in Albany. But, there are strong differences of opinion about the best path to achieve reforms that also mitigates risks to hard-won provisions that could be vulnerable if a convention is called.

The convention is being supported by a variety of good government groups, who feel that the culture of corruption in Albany will never be resolved by the state Legislature. The Convention could, for example, finally lead to action on the LLC loophole, which allows essentially unlimited donations to political campaigns. The convention could also make the job of a state legislator a full-time position where outside income is forbidden or significantly limited; recommend term limits for legislators; and more. Some in New York City see a convention as a great opportunity to change home rule powers whereby the city would have more power over its own affairs and be less reliant on state government.

There is no shortage of potential issues that could be taken up at a convention, a fact used by both sides. Some advocates, like pro-choice groups, believe that a convention could enshrine certain rights into the state constitution -- like those mandated by the Roe v. Wade Supreme Court decision -- which has not been amended since 35 years before Roe v. Wade. State law does outline abortion protections, but they are less robust than Roe v. Wade, which has concerned pro-choice advocates for some time. But leading pro-choice groups also fear a convention could strip the state abortion protections already in place, leaving New York even more vulnerable to the potential Supreme Court overturn of Roe v. Wade.

Opponents of a convention are far and wide, from labor unions to civil rights groups to many elected officials of both major parties. There are some exceptions, like Democratic State Senator Liz Krueger and Assembly Minority Leader Brian Kolb, a Republican. Governor Andrew Cuomo had expressed support for a Con Con, but he has receded over time. Mayor Bill de Blasio and the leaders of the majority conferences in the Legislature are against a Con Con. De Blasio and others have called the possibility attractive, but warned of the risk, while Republican Senate Majority Leader John Flanagan has questioned the monetary cost of a convention.

Labor unions and their allies are concerned that a convention could lead to the elimination of pension protections for workers. Other liberal groups worry that conservative billionaires could hijack the convention process and strip the constitution of its progressive protections, such as for the state’s “forever wild” forest preserve. Meanwhile, conservative groups worry that the constitution could become even more liberal than it is; many upstate are worried about a loss of gun rights if a convention were held.

With a culture of corruption in and around New York politics, especially at the highest levels of state government, wherein dozens of legislators have been convicted of abusing their powers, the measure, if passed, would allow judges to either strip or diminish the public pension of any government official convicted of public corruption.

The Public Integrity Reform Act of 2011, passed unanimously in the Senate, with one nay vote in the Assembly, and signed by Governor Andrew Cuomo, enacted the substance of this proposal, but only for people who entered the state pension system thereafter. This loophole led to further action. The measure would allow judges to revoke pensions from any official convicted after the enactment, permanently.

The vast majority of public officials support the measure, including Cuomo. The most recent vote on the amendment, in January of this year, passed the Assembly unanimously, but passed the Senate with four nay votes: Democrats Ruben Diaz Sr, Velmanette Montgomery, and Kevin Parker, and Diane Savino, who is a member of the Independent Democratic Conference. The only concerns that appear to have been raised related to exactly who the provision would apply to and concerns for the spouses and other family members of convicted politicians who may be in financial trouble without the politician’s pension funds.

Proposal 3: Development on Forever Wild Lands
The third ballot question concerns a proposal to allow certain development on some of the state’s “forever wild” land preserves. Per the current constitution, these lands are preserved with no room for further development.

The proposal would create a 250 acre land bank that municipal governments could utilize to build infrastructure projects deemed necessary for the safety and economic vitality of the surrounding regions, on the condition that an additional 250 acres of forest are added to the state’s protected forest reserve in replacement. The provision, which is supported by most elected officials in the direct areas involved and by environmental groups, would also allow the construction of bike paths, sewer lines, and other public infrastructure within the width of highways in the preserve. The measure aims to provide basic infrastructure, like water wells, and promote economic development in rural areas upstate.

Like proposal 2, opposition to this amendment is virtually non-existent. There is some concern, though, that energy for the “no” vote for the constitutional convention could theoretically lead to “no” votes for the remaining two questions despite widespread public support.

More info:
More on Question 3 from The New York Times

[See the exact language of the three ballot questions here, via NYC Votes]