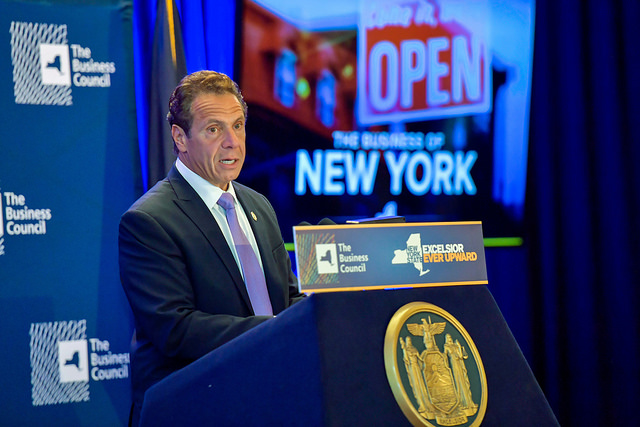 Governor Cuomo (via the Governor's Office)

With just a few weeks before the 2018 legislative session, Governor Andrew Cuomo must soon sign or veto the outstanding legislation that passed both houses earlier this year.

Among over 100 pieces of legislation headed for the governor’s desk over the next month is a bill that aims to strengthen the Freedom of Information Law, drafted with the input of many good government and media interests, with changes from a previous version vetoed by Cuomo to address his concerns.

A growing coalition of these groups, which wield national, state and local influence, is keeping the issue in the public eye by calling on Cuomo to sign the bill, which is aimed at improving government responsiveness to information requests by non-governmental entities. The bill would make it easier for members of the public and organizations to win attorneys’ fees when they have won a court order instructing agencies to release public records, which can happen after a government entity refuses to honor an information request and an appeal is filed.

The legislation, introduced by Assemblymember Amy Paulin and Senator Patrick Gallivan, overwhelmingly passed both houses of the Legislature earlier this year, but has not yet been delivered to the governor’s desk for consideration.

While a similar attorneys’ fees bill was vetoed by Cuomo in 2015, the current legislation addresses Cuomo’s concerns by creating a two-tier system for potential financial penalties. Cuomo, a second-term Democrat who says he is running for reelection in 2018, will have 10 days to sign the bill into law once he receives it.

On the heels of a series of newspaper editorials backing the bill’s passage, the Reporters Committee for Freedom of the Press, a coalition of 33 state media organizations from across the nation, wrote a letter to the governor Monday urging him to sign the legislation into law.

“Public information belongs to the public, and it shouldn’t cost thousands of dollars in legal fees to access it,” said Bruce Brown, executive director of the Reporters Committee for Freedom of the Press, in a statement. “If the government is required to pay the legal costs when a court finds they had no reasonable basis to deny a public information request, it provides an incentive for them to comply with legitimate requests in the first place. More information in the hands of the public only strengthens government transparency and accountability.”

The bill amends the state law, often referred to as FOIL, to require the mandatory awarding of attorneys' fees to plaintiffs when the plaintiff substantially prevails on the record request and a court finds that an agency had no reasonable basis for denying access to public records. Under current law, plaintiffs who pursue records in court can seek attorneys’ fees, but the reimbursements are awarded at the judge’s discretion after a plaintiff prevails substantially and proves the government had no reasonable basis for denying access.

Based on feedback from Cuomo’s office and recommendations from the Committee on Open Government, the 2017 bill creates a two-tier system, still allowing judges to use their discretion in awarding attorneys’ fees in cases where agencies failed to meet deadlines for complying with FOIL.

“We think [the two-tier system] addresses the veto messages that we had prior and conversations we’ve had with the governor’s office,” said Assembly Member Paulin, a Democrat from Scarsdale.

Action on the bill will be part of what is expected to be the usual end-of-year flurry of activity by the governor, dealing with legislation before another budget season begins in Albany. A spokesperson for Cuomo said the FOIL bill is under review.

Among those calling for Cuomo to sign the bill into law are open government organizations like BetaNYC and Civic Hall, as well as typical state government watchdog groups like the Brennan Center for Justice at NYU Law, Citizens Union, Common Cause NY, and League of Women Voters, which say they are encouraged by the newfound national attention and support that the bill has drawn.

John Kaehny, executive director of Reinvent Albany, which helped design the current version of the bill, said he believes that the legislation is a “compromise” that is “designed to pass.”

“The hope is to ensure that the governor sees the full range of support for the bill,” said Kaehny. “One of the reasons this bill has drawn national attention is because New York’s a big state, but also because freedom of information law and transparency have been under attack for the last year or so.”