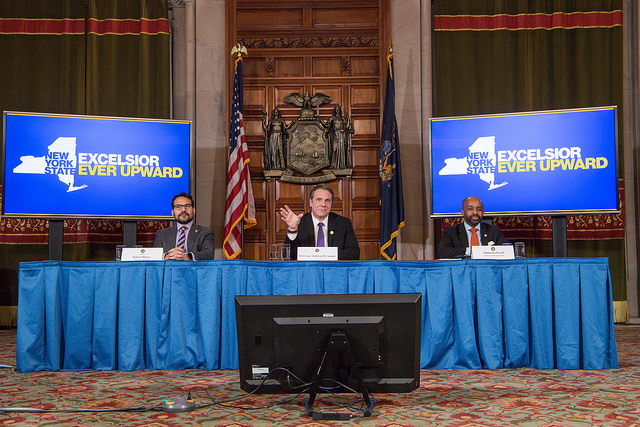 With the state facing a larger than usual expected budget shortfall for its next fiscal year, Governor Andrew Cuomo has been railing against the devastating impact proposed federal tax reforms would have on New York state finances.

The controversial reform plan that is still being negotiated in Washington, D.C. would either modify or completely eliminate the ability of New Yorkers to deduct state and local taxes from federal tax burdens and likely have deep economic impact for heavily Democratic states like New York, which typically have higher state and local taxes. As of Thursday, Republicans in the House and Senate say they have agreed on a tentative deal that would cap deductions at $10,000, reports NBC News. While negotiations are ongoing, Congress is expected to vote on a final deal this week.

Cuomo, a Democrat entering the final year of his second term, has said that the tax plan would “rape and pillage” New York at a time when the state is already faced with a $4.5 billion budget deficit -- the largest since Cuomo took office in 2011 -- and the governor has called on congressional Republicans from New York who support the tax plan to resign.

“There is no taxpayer in this state that lives in a congressional district that won't be hurt,” said Cuomo. “Because there's only one state budget. And we start with the $4 billion deficit. You put the state at a structural disadvantage. The taxes would go up on everyone. And that's not complicated math.”

In January, Cuomo will outline both his 2018 policy agenda in his State of the State speech as well as his executive budget proposal. The new state fiscal year begins April 1. As Cuomo and his team prepare that budget, there are troubling signs at both the state and federal levels.

State Comptroller Tom DiNapoli has projected lower-than-expected tax revenue for the current and upcoming fiscal years. State operating funds receipts will be $1.8 billion lower than projections in the Division of Budget’s August financial plan for this fiscal year, which ends March 31, and $2.8 billion lower in 2018-19, according to a November report by DiNapoli’s office. The $4.5 billion gap may be exacerbated in the coming fiscal year by fallout from federal tax reforms.

But, if the administration continues to adhere to Cuomo’s self-imposed 2 percent limit on annual growth in state operating spending -- and it intends to, according to a spokesperson for Cuomo’s Division of the Budget -- the deficit the state will be facing drops to $1.7 billion for next fiscal year. Federal reforms could make budget negotiations even more challenging. If New Yorkers lose most of their state and local tax deductibility, there will almost certainly be more calls for the state to cut taxes.

Additionally, Politico New York has reported that another $1 billion hole may be carved into the budget if the federal government defunds a portion of the state’s Essential Plan, sometimes called the Basic Health Plan, which provides low-cost health insurance to residents earning less than twice the federal poverty level. And, in March, the state will run out funds for Children’s Health Insurance Plan (CHIP), a joint state-federal healthcare program, if it is not renewed by Congress. The state relies on $1 billion in federal CHIP funds to insure 330,000 children.

“His problem is compounded because he'll have to go to battle over healthcare spending for the first time in history,” said E.J. McMahon, research director at the Empire Center for Public Policy, speaking of Gov. Cuomo. “It's going to be the most pressured budget since his first year in office -- easily.”

Cuomo, who is running for reelection in 2018 and has presidential ambitions, has prided himself on passing on-time budgets and restoring fiscal order to Albany. He has already said he would link any pay raises for legislators, which are long overdue, to whether or not a budget deal is reached in a timely manner. This year’s $153-billion budget for fiscal year 2017-2018 was passed nine days late.

To address the existing budget gap, the state must either cut spending or increase taxes. Cuomo’s office is now tasked with devising a financial plan that will not cripple agencies or end needed programs, but that will also not drive out the state’s highest income earners, whose taxes provide 40 percent of New York’s operational funding.

It is unclear to what extent the final federal tax bill -- if passed -- will affect New York and its taxpayers, but some fear it could provide additional motivation for the state’s top 1 percent to take residency elsewhere. Passage would likely dash any Democratic hopes for an expanded millionaire’s tax, such as the policy advocated by New York City Mayor Bill de Blasio.

If millionaires and billionaires leave the state, “the burden then falls to everyone else: the middle class and the working families,” Cuomo said Wednesday in Albany at the awards ceremony for his 10 Regional Economic Development Councils.

Federal tax policy aside, experts say the widening gap between the state’s anticipated tax revenue and receipts is unusual given what is, overall, a well-performing economy and a booming stock market. While there are certain indications that suggest state personal income tax receipts have been depressed this year by taxpayer behavior in light of possible federal tax changes, the extent of any such impact is difficult to estimate, according to the comptroller’s office.

There is some debate as to how to handle the upcoming budget deficit, which Cuomo has acknowledged is likely to significantly impact education funding, which may not see the typical annual increases of recent years.

Comptroller DiNapoli has repeatedly urged that the state take steps to eliminate projected budget gaps and achieve structural budget balance, including, for example, minimizing use of one-time resources to support recurring spending and avoiding the use of administrative or accounting actions that lower the appearance of spending but do not eliminate the state’s obligation.

These recommendations are echoed by the fiscal watchdog group Citizens Budget Commission (CBC), which has highlighted how the state has created the appearance of meeting the 2 percent cap on spending increases by shifting certain personnel expenses to the capital budget.

"Education, Medicaid, and personnel are the three things that he could target. We certainly think a lot of the economic development spending should be curtailed, but that's a slightly smaller pot," said David Friedfel, director of state studies at CBC.

Cuomo’s administration often touts spending restraint and disputes the CBC’s characterization of its spending patterns. A spokesperson for the Division of the Budget said that the positions in question had been categorized as capital expenses because they had been associated with capital projects.

“Governor Cuomo has been rigorous and effective in constraining State spending growth, achieving more fiscally responsible results than those of his predecessors. The current year’s budget holds spending growth to historically low levels for the seventh consecutive year while balancing the budget and lowering taxes for all New Yorkers.” said Morris Peters, of the state’s Division of the Budget.

Legislative leaders are divided on how to approach the budget and looming deficit. Senate Majority Leader John Flanagan, a Republican from Long Island, has opposed increasing taxes on high-income earners.

"Senator Flanagan believes we must continue to strictly adhere to the two percent spending cap, which would cut the Governor's projected deficit in half, and review every single dollar the state spends," said Scott Reif, spokesperson for Flanagan, in a statement.

Assembly Speaker Carl Heastie, a Bronx Democrat, did not express much concern when speaking to reporters last week, noting that when Cuomo was first elected to office the state was forced to wrestle with a $10 billion budget deficit. “But we’re New Yorkers and we’ll find our way through it,” he said.

Cuomo’s budget director Robert Mujica is asking agencies to keep their budgets stagnant and others are questioning whether Cuomo’s signature infrastructure projects or economic development programs should see cuts, or perhaps a controversial tax break for the film and television industry that has cost the state $31 million since 2010.

While many have praised Cuomo for keeping the deficit relatively low since taking office, according to McMahon, the state’s fiscal situation in 2010 and next year are not necessarily comparable.

“In 2010, there was low-hanging fruit then that is not low-hanging now,” said McMahon, noting that Cuomo’s office significantly restructured state personnel. “The first place they will go is school aid. Medicaid is more complicated because there are three levels of payment and it is controlled by federal law.”

Education advocates pushed back on the suggestion that cutting education funding was the way to address the deficit. Instead, the state should reinstate the millionaires’ and billionaires’ tax to levels they were at before Cuomo took office and end tax loopholes for hedge-fund and private-equity billionaires, according to Billy Easton, executive director for Alliance for Quality Education of New York, a teachers-union-allied nonprofit.

“They shouldn’t say the outcome is we’re going to increase the deficit in educational opportunity for black, brown, and low-income kids,” said Easton.

The governor, meanwhile, has vowed to continue to challenge the federal government and members of congress who support the cuts. “I will fight this economic civil war every day that I am governor of the State of New York,” he said on Wednesday.