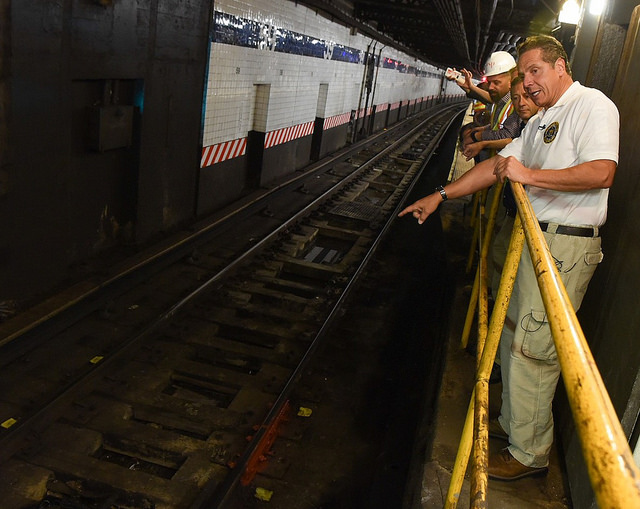 Three key points of contention between the city and the state have emerged over transit funding, highlighted during Metropolitan Transit Authority (MTA) Chair Joe Lhota’s testimony at the joint legislative hearing on transportation Thursday in Albany.

The hearing, which included discussion of the MTA plan to restore New York City’s ailing subway system, occurred amid an ongoing feud between New York City Mayor Bill de Blasio and Governor Andrew Cuomo over the funding of crucial repairs for the deteriorating transit system, which is controlled by the state.

In a four-hour session that was at times good-natured and at others tense, members of the Senate and Assembly repeatedly questioned Lhota on three controversial and relevant aspects of Cuomo’s 2018 agenda: cost shifts of capital funding for the city’s subway system from the state to the city as outlined in Cuomo’s budget; a “value capture” plan to allow the state to reap property tax revenue spurred by transportation improvements in the city; and the recently unveiled congestion pricing plan outlined by Cuomo’s “Fix NYC” panel.

These issues were addressed by de Blasio officials in a press conference call with reporters two days earlier. “We are objecting strongly to language that was inserted into the budget that would create a new, capital liability, a new capital commitment liability on the part of the city for New York City Transit, which is breaking a long-standing history of how the MTA is funded,” said First Deputy Mayor Dean Fuleihan during the call. He and the other officials on the call also pushed back against the value capture proposal, calling it an unprecedented intrusion into the city’s tax system.

“To take our property taxes which pay for our police, our schools, you know, our parks, our sanitation, to try and take from our property taxes for something the State wants is absolutely unacceptable…the first thing the State should do is return the $456 million diverted away from the MTA,” de Blasio said, referring to funds that were earmarked specifically for the MTA diverted by the State to other purposes over the last few years. “Put that money back and then we can discuss how to move forward.”

De Blasio will testify himself at a state legislative budget hearing in Albany on Monday, February 5. MTA funding, including the state’s insistence that the city pay about $450 million toward Lhota’s emergency subway stabilization plan, will likely be topics of discussion.

During his testimony Thursday, Lhota said the state’s $836 million Subway Action Plan launched last summer to restabilize the city's subway service is working, citing the MTA’s ability to prevent the predicted “summer of hell” in 2017, though the data does not necessarily support his claim, as explained by Nicole Gelinas of The New York Post.

“That’s not true — or only true if you compare summer and autumn to winter and spring, instead of a season to the previous year’s season. The latter is a far better measure because of similar crowding and weather,” Gelinas writes.

Despite this, Lhota said he attributes the MTA’s success at preempting a disastrous transportation summer to heightened “vigilance” on the part of the agency, something he said must continue year-round.

He also announced technological improvements coming to the MTA, such as a new signaling technology, a fleet of electric buses, and the Freedom Ticket, which allows Long Island Rail Road commuters to seamlessly transfer to the subway system. "I fully expect it to happen this year," Lhota said of the Freedom Ticket.

Cuomo's executive budget allocates $9.7 billion for the departments of transportation and motor vehicles, the Thruway Authority, and the MTA. However, the budget shifts all of the responsibility for capital costs to the City of New York, which would “require a sevenfold increase in City capital contributions,” according to Citizens Budget Commission President Carol Kellermann.

“What we are talking about here is a radical restructuring of where the [Capital] money comes from,” State Senator Gustavo Rivera, of the Bronx, said to Lhota on Thursday. “Is that correct?”

Lhota said this type of fluctuation is typical of past capital plans for transportation.

Mayor de Blasio is expected to continue to push back on the proposal in the coming weeks, while also relying on state legislators from the five boroughs to take up the cause in budget negotiations with the governor’s administration.

De Blasio has reluctantly agreed to consider the congestion pricing plan released by Cuomo’s advisory panel. The plan, which is similar to one previously proposed by former New York City Mayor Michael Bloomberg and Cuomo has indicated he will tweak as he also negotiates with the Legislature, outlines a three-year, three-phase program aimed at reducing congestion in Manhattan and raising funds for transit improvements, especially the subway system. It also includes calls for the city to increase enforcement of certain traffic measures, like double-parking and placard abuse, that currently contribute to congestion.

Fully phased in, the Fix NYC proposal would charge cars entering the most congested areas of Manhattan $11.52, while trucks would pay $25.34, and those riding in cabs or for-hire vehicles like Uber would see a $2 to $5 surcharge. The congestion fees would vary based on location and time of day, and would likely apply to non-commercial vehicles driving below 60th Street in Manhattan. The plan calls for new transit investments early on and estimates about $1.5 billion in annual revenue when fully implemented.

De Blasio has previously called general congestion pricing, with new tolls on the East River bridges, a "regressive tax" that would disproportionately impact low- and middle-income commuters from outer boroughs, though there have been holes punched in that argument given the low percentage of people who commute into Manhattan from Queens and Brooklyn that are low-income. The mayor appeared less dismissive of the Fix NYC recommendations, calling them an improvement from prior congestion pricing plans.

However, Savino, a member of the Independent Democratic Conference representing parts of Staten Island and bits of Brooklyn, questioned whether appointees to the Fix NYC board considered the Move New York plan as a “better proposal” to eliminate “winner and losers” while enabling the city to generate transportation revenue without going through Albany. A key element of Move New York not included in the Fix NYC recommendations is lowering tolls on the Verrazano and other currently-tolled bridges, something Cuomo indicated he wants to consider.

Lhota said that panel produced a plan that they believe is a good starting point and that such concerns have yet be addressed during the legislative process. “The basic concept is there. Now, how do we make it fair?” he said.

“Fairness is important,” agreed Savino, adding, “We need to find a more steady stream of revenue for the MTA region, not just the transit system, but the region itself.”

Alex Matthiessen, the founder and director of Move New York, a group that evolved out of former Mayor Bloomberg’s failed attempt to pass a version of congestion pricing, has also thrown his support behind the Fix NYC plan despite its differences with his group’s proposal.

Other lawmakers and transportation experts are not yet sold on congestion pricing. Senator Leroy Comrie, a Queens Democrat, expressed skepticism of the plan, saying it does not solve the problem of congestion in Manhattan nor does it generate a reliable source of revenue for the MTA.

“My concern with congestion pricing is it doesn’t relieve the congestion,” Comrie told Lhota during Thursday’s hearing. “Why are we going to do a program where we are just taking more money from people and still the essential business districts will be crowded with the elements -- it won’t fix the truck traffic in the city, it won’t fix the issue of people coming from New Jersey into the City…so there’s a lot of things wrong with the plan.”

Regarding Cuomo’s value capture plan, the mayor’s office maintains that the administration was not consulted ahead of time, and just learned of it from Cuomo’s executive budget. The budget proposal, which targets zones around transportation projects such as the makeover of Penn Station, the 125th Street Metro-North Railroad stop, and expansion of the Second Avenue Subway, would deprive the city of control over its own potential revenue, de Blasio officials say.

“This is the City’s property tax base, it’s our major source of revenue,” said Fuleihan during the January 23 phone conference. "For the MTA to arbitrarily take City tax revenues, determine what those tax revenues are, on established neighborhoods...it’s outrageous and there is no logical argument for this.”

“The City has significant obligations that we need to keep, that we need to make sure we are able to commit to—safest big city in America, universal pre-K for four-year-olds, expansion of pre-K, we can go on, addressing the opioid crisis,” said Fuleihan.

At the hearing, Lhota fended off criticisms of Cuomo’s plan from New York City lawmakers, including Senator Liz Krueger, a Manhattan Democrat. “I can't emphasize enough why I think that this is a terrible idea, and I was hoping you would agree with me,” Krueger said of the value capture proposal.

When asked by reporters why the city was not consulted in the drafting of the legislation, Lhota said he could not speak for the governor’s office. “You are asking me questions that should be directed at the [executive] chamber,” he said, but noted that Bloomberg used value capture to extend the 7 train to the Upper West Side of Manhattan (something de Blasio officials acknowledged but pointed out was a city decision).

A spokesperson for Cuomo’s office addressed the criticisms saying that other major cities have used this strategy and they expected all affected to be on board with the plan.

“Transit systems in cities across the world use this method, including New York City,” said Cuomo spokesperson Dani Lever. “We'd think anyone who wants to improve the subways would support it, and we will work with the legislature and all our local partners throughout the budget process to pass this law.”

Lhota indicated that the value capture tax could be extended indefinitely after the investment is recouped, arguing that there was a good case for the tax to be continued to maintain the quality of the subway service. “There’s unanimity in the entire MTA board that if we are using taxpayer dollars, we should try to recoup some of that wherever we can,” he said. He also said that the state is constitutionally authorized to utilize the value capture plan in other parts of the city, as needed.

Assembly Ways and Means Chairperson Helene Weinstein, a Democrat representing Brooklyn, noted the absence of communication between Cuomo’s administration and the community representatives of affected areas, questioning why the value capture wasn’t applied to suburban areas that are benefiting from major transportation investment. Of the Hudson Yards development on Manhattan’s West Side, she said, “That was a negotiated, agreed-to proposal, that both the city and MTA board worked out, and that worked on properties that were not really developed. There was clearly much more of a nexus between the extension of the 7 line [and the linked value capture program], than this sort of open-ended situation here.”