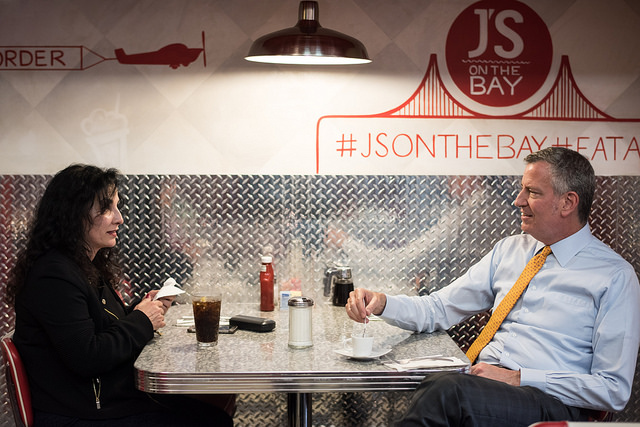 As a debate rages over the appropriate law enforcement response to subway fare evasion, in Albany, a bill steepening the penalty for certain subway sex offenses is getting another look.

During Mayor Bill de Blasio’s testimony at a joint legislative budget hearing on Monday, Senator Diane Savino asked the mayor to put pressure on the Assembly to consider her legislation that would make certain lewd subway behavior a class B felony, resulting in up to a year in prison.

Savino recalled that in 2012, de Blasio, then public advocate, stood with her and Assemblymember Michael Cusick at a Staten Island subway station to unveil the “subway grinding” bill, which would target unwanted sexually-motivated touching of someone who is “physically helpless or unable to move on public transit.”

“We passed the legislation -- that you helped me draft -- in the Senate five times,” said Savino, a member of the Independent Democratic Conference (IDC) who represents Staten Island’s North Shore and southern Brooklyn, at Monday’s hearing. “If you could use your considerable influence with the Assembly to try to get it out of the Assembly. It’s critically important to safety in the subways,” she said, before continuing on to other topics.

While Savino’s bill has repeatedly passed the Senate, where Savino’s conference forms a ruling coalition with Senate Republicans, it has stalled in the downstate Democrat-dominated Assembly. De Blasio typically works closely with Assembly Speaker Carl Heastie to represent New York City’s interests in the legislative process.

De Blasio did not specifically address the legislation during Monday’s hearing. When Gotham Gazette followed up with the mayor’s office, a spokesperson said that Savino’s bill is currently under review.

“We support the spirit of the legislation and look forward to working with Senator Savino to ensure it’s the most effective that it can be for New Yorkers,” said mayoral spokesperson Freddi Goldstein.

A compromise bill passed by both houses in 2015 -- sponsored by Republican Senator Marty Golden of Brooklyn and Democratic Queens Assemblymember Aravella Simotas -- adds unwanted rubbing against bus or subway riders to the penal law definition of “forcible touching,” a class A misdemeanor, carrying a maximum sentence of a year in jail.

Savino maintains that the 2015 bill has had no effect, since forcible touching is already a misdemeanor, though subway and bus offenses have not necessary been treated that way by the courts. Her legislation was motivated in part by a case dating back to 2002, in which a “very large” man surreptitiously masturbated and ejaculated on the clothing of a teen girl while she was immobilized on a crowded train. An appeals court ruled that this was not forcible touching, since the offender did not use physical force, but only a “stealth” action.

When de Blasio backed the Savino-Cusick bill in 2012, he said in a statement, “When the laws on the books aren’t enough to protect people, we have to make them tougher. ‘Grinding’ is a deeply personal and deeply offensive violation that no woman or straphanger should have to suffer. We need laws that match the seriousness of this crime.”

In the Assembly, some question whether the reclassification is effective at deterring crime, since maximum sentences are rarely meted out.

Brooklyn Assembly Member Joe Lentol, a Democrat who chairs the Assembly codes committee, said that an increased awareness around sexual harassment this year might spur the passage of Savino’s bill this year, but said it was worth investigating whether judges are enforcing the 2015 statute, and whether it has translated into actual jail sentences for offenders.

“In this day and age, this might be baseline behavior that we want to go after -- maybe she’s right. I don’t know if a class B felony is appropriate, but maybe we should make it a felony,” said Lentol.

“We have made it a crime; it was never a crime before,” added Lentol.

In the meantime, reported “grinding” cases have jumped more than 50 percent in the last three years, according to an NYPD data report compiled by Savino last year, though she acknowledges this inflated figure could be a result of more riders reporting the crimes rather than an increase in incidents.

"I’m confident that we don’t have more sex crimes happening. We have more women who know that we care, who trust the system, and are willing to make that report," said NYPD Transit Chief Joseph Fox on CBS New York in 2016.

When asked for a comment on the outlook for her bill this year, Savino said, "For years, I have worked to elevate penalties on serial 'subway grinders' who prey on women commuting on our subways, and I have no doubt the Senate will pass my bill again. A felony penalty is necessary for egregious offenders who continue to violate women on mass transit and walk away with a slap on the wrist."