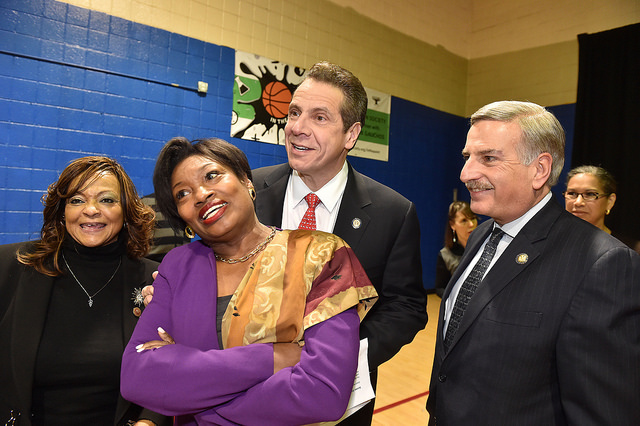 What would New York State’s budget look like if women were in charge? That is this year’s $168-billion question.

For decades, the final details and compromises in New York’s annual budget have been decided by the so-called “three men in the room,” or the leaders of the two legislative houses and the governor, but with workplace sexual harassment at the forefront this year, it seems that at least one woman will be included in parts of the closed-door talks.

Facing pressure from advocates, editorial boards, and others to include female representation during final negotiations of a new budget -- which is expected to include a statewide anti-harassment policy for government officials -- Cuomo recently announced that the only female legislative conference leader, Democratic Senate Minority Leader Andrea Stewart-Cousins, will for the first time play a role in deciding the legislation that goes into the final budget documents.

“Leader Stewart-Cousins will be included in negotiations on the ‎sexual-harassment bill, as well as a wide range of other issues being dealt with in this year’s budget,” a Cuomo spokesperson told the Wall Street Journal.

Notably, the negotiations will occur as Klein is being investigated for allegedly forcing a kiss with an aide in 2015.

While it is not clear what that range of other issues will cover, Stewart-Cousins -- who has long demanded inclusion in budget talks, to no avail -- said at a press conference on the Child Victims Act (CVA), that she will use the opportunity to fight for other bills put forward by her conference that have long stalled in the Republican-controlled Senate.

“When I’m in the room, you can be sure that I will be advocating for this, and other things that our conference is carrying and pushing forward,” Stewart-Cousins said of CVA, adding that by representing the 21-member conference (in the 63-seat chamber), she brings with her “the voices of half of New York.”

The Child’s Victims Act, which has been in limbo for 10 years, lifts New York’s statute of limitations to match that of other states, making it easier for victims of child sexual abuse to bring charges against their abusers. Other big ticket items on the table this year -- many of them carried by members of the Democratic conference -- include gun control, early voting, a state tax overhaul, and criminal justice reforms.

How Stewart-Cousins’ presence in “the room,” typically the governor’s office on the second floor of the state Capitol, shapes the final budget bills, or whether more women-centered legislation and other bills carried by her conference will rise to the top, remains to be seen. While her involvement in leaders’ meetings is a notable start, as one of five powerbrokers in “the room,” there will still be a lopsided ratio considering New York’s female-heavy electorate, according to Dina Refki, executive director of the Center for Women in Government & Civil Society at Albany University.

“Research tells us that when women are outnumbered, their voices tend to be silenced,” said Refki. “Of course, Andrea Stewart-Cousins is a strong legislator, and it’s a good thing to have, but if we are looking at research, we tend to believe that women need to be represented in sufficient numbers to have a meaningful impact on the process.”

Government reformers note that the power in the room is already tilted in favor of the executive, due to the 2004 Silver v. Pataki Court of Appeals decision, which bars the Legislature from making changes to any part of an appropriations bill, short of rejecting the entire bill. The main leverage the legislative leaders have during talks is the ability to delay the budget, which is bound to draw criticism of Albany’s dysfunction from the public and editorial boards, according to former Assemblymember-turned-professor Richard Brodsky.

“You cannot govern a state in perpetuity based upon a tyrannical executive power -- and that’s what we have. If you want to reform government, adjust the balance of power,” said Brodsky.

Tyrannical power or not, having the governor’s ear during those final hours is valuable and if political science studies are any indicator, Stewart-Cousins’ involvement may help tip the scales in favor of better legislative outcomes for women. There is a large body of data indicating that female representation in government leads to the passage of more legislation on issues of concern to women -- whether protections for women’s health, workplace equity, or paid family leave, for example -- but only when there is a “critical mass” of female representation. Political scientists disagree on the exact tipping point, pegging it at 15, 20, 25, or 30 percent.

While the final decision-makers in Albany have historically all been male, there are often women in the room in a supportive or advisory capacity, and numerous female lawmakers who lead legislative committees are heavily involved in budgetary proceedings. At every stage there is an opportunity to women influence the content and the shape of the budget, according to Refki.

“Women are not monolithic. They don’t all think the same, or act in the same way, but by virtue of their socialization as women, they tend to see women-centered issues as priorities,” she said. “The presence of women at each juncture in the process at least brings a voice that could influence what takes shape at the end.” 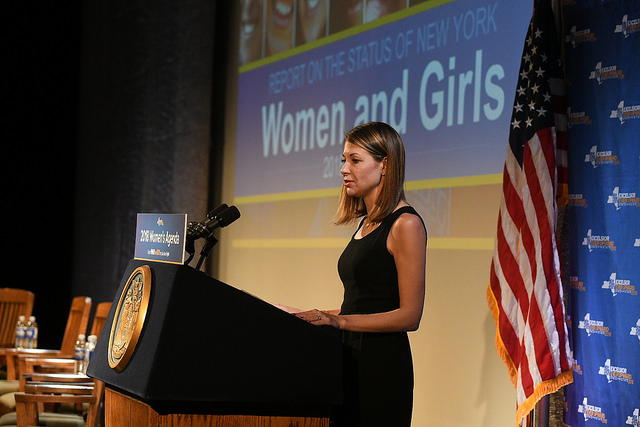 Melissa DeRosa, now Cuomo’s top aide as secretary to the governor, has long been involved in budget conversations, including in her previous role as Cuomo’s chief of staff. DeRosa and Lieutenant Governor Kathy Hochul both chair Cuomo’s newly-created Council on Women and Girls, which helped develop his women’s agenda this year, a spokesperson from Cuomo’s office said.

Hochul, while not directly involved in budget negotiations, aids the process by promoting key pieces of the governor's budget agenda around the state. When interviewed about Hochul’s reelection campaign last month, her chief of staff told Gotham Gazette that she is “focused on ensuring an on-time budget.”

Cuomo has brought a number of women into his inner circle in the past year, including re-hiring former federal prosecutor Linda Lacewell, now as his chief of staff, and Cathy Calhoun as his director of state operations. Lacewell replaced DeRosa (pictured), who was promoted to Cuomo’s top advisory position last year, becoming the first woman to hold the position.

“Sexual harassment must be confronted head-on,” said Heastie in a statement. “I look forward to the recommendations of this workgroup so that we can develop a statewide legislative solution to this very serious problem.”

Klein, whose Independent Democratic Conference forms a ruling coalition with the Senate Republicans, also has a female chief of staff, Dana Carotenuto Rico, who typically joins him in “the room.” Other times, IDC members who have expertise in a particular subject are called in, an IDC spokesperson said. For example, in 2017, Senator Diane Savino and Senator Jesse Hamilton were invited into the governor’s chamber to discuss details of legislation to raise the age of criminal responsibility.

Additionally, women play a role at many turns in budgetary proceedings leading up to the final negotiations. The Legislature’s joint budget hearings, which take place in February, are now headed by female lawmakers, and when one-house agendas are released, female staffers from legislative and executive offices participate in subsequent meetings on various budgetary categories called “tables.”

Two women now hold the Legislature’s most powerful committee chair posts: Senate Finance Chair Kathy Young, an upstate Republican, and Assembly Ways and Means Chair Helene Weinstein, a Brooklyn Democrat. The two women, along with IDC’s Senator Savino, of Staten Island, is vice chair of the Senate finance committee, must attend all of legislative budget hearings, which sometimes run late into the night. These hearings help inform one-house budget proposals, conference discussions, and larger budget negotiations, according to those with knowledge of the budget process.

Scott Reif, a spokesperson for Flanagan, said that Young is extensively involved in negotiations on the state budget and that other female staff members advise the leader on key issues related to the budget, like sexual harassment, criminal justice, and education. Reif did not indicate that any of the women are in the negotiating room when the final budget bills are decided.