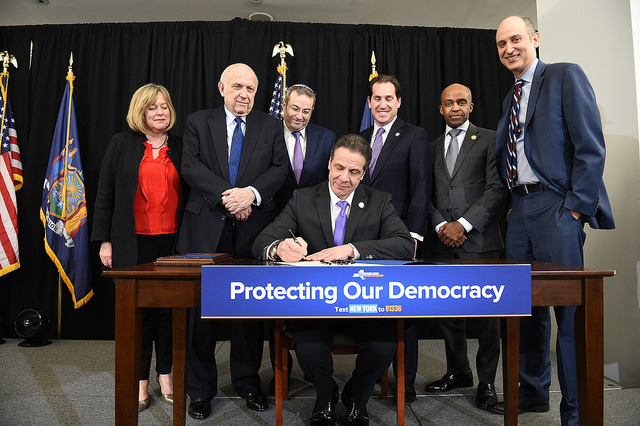 Governor Andrew Cuomo on Wednesday held a ceremonial bill-signing, one of several since the state budget was approved, to tout the passage of new restrictions and disclosure requirements for political advertisements on social media. But the bill was a component of Cuomo’s larger Democracy Agenda, measures including voting and campaign finance reform that otherwise fell by the wayside during budget negotiations and seem unlikely to pass in the remaining months of the legislative session in Albany.

“We have a crisis in our election system,” Cuomo told a room full of people at the Cardozo School of Law in Manhattan on Wednesday. “We now know that our election system was influenced and tampered with by foreign entities. And it’s not partisan rhetoric, it’s not a science fiction novel. We know it. Russia was involved.”

Prompted by the widespread Russian influence campaign that targeted nearly two dozen states during the 2016 presidential election and the proliferation of secretive political advertising on social media platforms like Facebook, Cuomo proposed and the state Legislature successfully passed the “Democracy Protection Act,” which prohibits foreign entities from creating independent expenditure committees or buying political ads, requires anyone who purchases an online political ad to register as an independent expenditure committee, and also requires online ads to include information about who paid for them, as is currently required of traditional media platforms.

The state Board of Elections will also now create an public archive of those online ads and retain them for five years.

“We right now have a toxic cocktail that has brewed,” Cuomo said of the “explosion of social media” and the “anonymity” and “targeting ability” of social media platforms. “They know your preferences, they know who you are, what you look like, what you buy, where you shop. They know your shoe size and they can target a message just to you,” he said, “and we then have the access by the foreign entities to these online platforms.”

Cuomo loftily insisted that the legislation will “fundamentally change” elections in the state and predicted, “This law is going to force national change.” Several progressive movements -- for women’s rights, environmental rights, worker safety rules, gay rights, civil rights -- he exclaimed, started in New York and that inaction in Washington, D.C. necessitates that states forge ahead on tackling the issues accompanying elections in the digital age.

But New York leading the way on election and campaign-related reforms appears to be an imperfect message from New York and a messenger like Cuomo. The state has been a laggard on improving voter participation and access, and its outdated laws fall far behind most other states. Cuomo himself has railed against weaknesses in state campaign finance laws while exploiting them for his own campaigns.

In 2017, Cuomo released a 10-point government ethics and voting reform agenda, which included early voting, automatic voter registration, same-day voter registration, and campaign finance changes such as closing the LLC loophole, which allows anonymous donors to flood candidates’ campaign coffers in New York. Cuomo has been one of the biggest beneficiaries of that loophole and has done little to actually push for its closure. None of those reforms passed last year.

This year, Cuomo proposed many of the reforms again, adding $7 million in proposed funding to implement early voting and banning outside income for legislators. But yet again, all but the online ads bill fell through. Cuomo made no mention of the other planks of his Democracy Agenda at Wednesday’s celebratory event, where he positioned New York as a national leader. He also took no questions from reporters at the two events where he made appearances Wednesday.

Most of the reforms are opposed by Republicans in the state Senate who continue to control the chamber with the help of a rogue Democratic Senator, Simcha Felder of Brooklyn, who caucuses with the GOP to give them a one-vote majority. But Cuomo, when he wants to, has been able to convince Republicans to vote through bills that they might traditionally oppose including marriage equality, gun control measures, and a major hike in the minimum wage.

Cuomo has repeatedly laid the blame for the failure of his proposals on the Republicans, who for seven years were allied with a breakaway group of eight Democratic Senators called the Independent Democratic Conference. In a deal recently brokered by Cuomo, the IDC rejoined the mainline Democratic conference. The Democrats are now counting on victories in special elections for two state Senate races on April 24 to be on par with Republicans in the Senate. Felder’s loyalty in that situation remains an open question. Cuomo has said the goal is to then pick up additional seats in the fall’s regularly-scheduled elections for all seats in the Legislature.

Earlier on Wednesday, Cuomo restored voting rights to individuals on parole through an executive order, arguing that the order was necessary since the measure wouldn’t have passed the Senate. (Cuomo’s primary opponent Cynthia Nixon, and others have said, however, that Cuomo is increasingly pursuing popular progressive measures by any means necessary because of the threat of a strong primary challenge.)

Similarly, Cuomo justified the unification deal by insisting it was necessary to pass progressive reforms that have failed for years. “We finished the budget. We did a lot of good things in the budget, but there are also things that we didn’t pass that we need to pass...The Child Victims Act, more gun safety, bail reform, the DREAM Act, banning outside income, campaign finance reform, early voting,” he said at a news conference announcing the deal at his executive offices in Manhattan.

He went on, “These are all core, essential progressive principles that were not passed in the budget and which we will not pass until we have a Democratic Senate.” It’s unclear, however, if a Democratic Senate itself will come to pass any time soon, or if the appetite would be there for the types of voting, campaign finance, and government ethics reforms that Cuomo has said he supports.