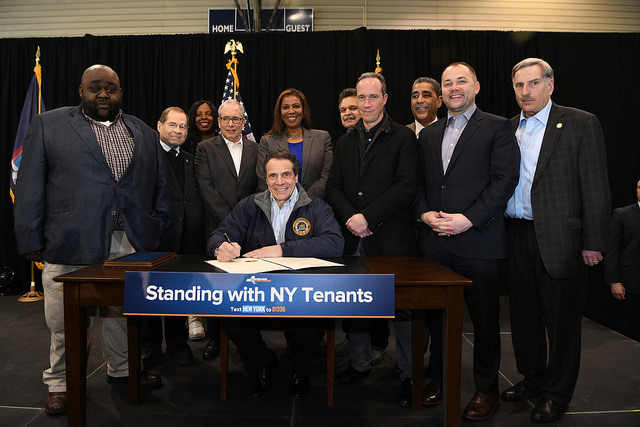 Governor Andrew Cuomo’s executive order earlier this month to impose an external monitor on the crisis-plagued New York City Housing Authority has turned into a potential budget boondoggle for the city, with Mayor Bill de Blasio warning on Thursday of the “unforeseen consequences” the order could have on the city’s fiscal future.

The governor’s order came after months of escalating problems at NYCHA developments that highlighted the decades-long financial struggles and mismanagement at the city-run agency. NYCHA was also sued by a group of tenants and advocates citing the harsh living conditions in NYCHA apartments, including issues with mold, lead paint, and dramatic failures in heat and hot water systems this past winter during extreme cold spells. That led Cuomo to declare in his order that the conditions at NYCHA “constitute a public nuisance affecting the security of life and health in the city of New York” and that the city could not adequately respond to an imminent disaster.

The emergency declaration ordered the selection of an “Independent Emergency Manager” to oversee repairs to mitigate harmful conditions and to create a plan to utilize $550 million in state funding pegged for NYCHA. The order also eased procurement rules to speed up the pace of repair and maintenance work.

But the order also notes that any repairs ordered by the emergency manager must be paid by the city, as per the state Public Health Law, which Mayor de Blasio took issue with on Thursday during his Executive Budget presentation as he spoke of other “unfunded mandates,” cuts, and cost-shifts that the city was saddled with under the latest state budget.

“The more we and other analysts have looked at that executive order, the more we see a very challenging and potentially dangerous element of it in terms of our budget,” de Blasio said at City Hall. He said that “open-ended language” in the order could mean millions in cost for the city, which would not be approved through the city’s budget process, and therefore would not allow the City Council, the mayor, or comptroller any control over spending.

“We are concerned that that creates a very problematic precedent and in addition could have many unforeseen consequences for next year’s budget,” he added.

De Blasio has repeatedly touted investments he has made in NYCHA since taking office, including $1.6 billion in operating funds and $2.1 billion in capital money. Under his NextGeneration NYCHA plan to get the struggling agency back on its feet, NYCHA has managed to turn around its operating finances, no longer running an annual deficit, though it still faces many billions in capital repair and construction needs.

On Thursday, de Blasio announced an added $20 million investment over the next two fiscal years to further reduce the backlog of repairs at NYCHA by 50,000 cases. But the massive capital need remains, estimated at $25 billion, and growing. The City Council recently called on the mayor to add another $2.45 billion in NYCHA capital funding to the budget (the city has separate operating and capital spending plans). Though no additional capital funding was added in the executive budget, the city has already allocated $423 million in capital for fiscal year 2019, according to Freddi Goldstein, a mayoral spokesperson.

But for all the potential burden that de Blasio spoke of, the actual effect of Cuomo’s order is unclear and the mayor is not entirely helpless in the process. Budget watchdogs also currently have no idea how much money it could cost the city. “That’s a total unknown at this point,” said Doug Turetsky, communications director for the Independent Budget Office, a city-funded monitor.

Sean Campion, senior research associate at Citizens Budget Commission, an independent nonprofit, said the governor’s order is a “good first step” to chip away at the housing authority’s massive needs, but he acknowledged that the order is “somewhat vague” about the city’s responsibilities. “It definitely sets a new precedent. The impact is yet to be determined. There’s obviously some benefits to having this monitor come in and develop a plan for spending the state money and whatever city money the city wants to chip in as well,” he said.

He also noted that, as per the order, the emergency manager will have to be chosen “unanimously” by the mayor, the City Council speaker, and the president of the NYCHA Citywide Council of Presidents. If they fail to do so within the mandated time frame, the decision falls to Comptroller Scott Stringer. “So whoever’s going to be appointed to this position is in some ways going to be appointed by city elected officials, none of whom really have an incentive to essentially give the monitor a blank check for funding all of NYCHA’s repair needs. All that’s sort of tempered the risk,” Campion said.

Several elected officials stood with Cuomo when he signed the order -- including Stringer, Public Advocate Letitia James, Council Speaker Corey Johnson, and City Council Member Ritchie Torres, former chair of the Council’s public housing committee -- and heaped praise on the governor for taking action, though most had not read the language contained in the order. The officials posed with Cuomo for celebratory photos, behind a banner reading “Standing with NY Tenants.”

After the New York Times first pointed out the potential costs the city would have to bear, some of the same officials demurred.

“We have concerns about some of the ramifications of the order, but we are still reviewing it and discussing our options and potential costs,” said Speaker Johnson, in a statement to Gotham Gazette. “NYCHA is in crisis and the situation required swift action. We will work with the governor, the mayor and the tenants to find solutions to the worst problems affecting the residents. We are all in agreement that they have suffered for too long.”

Stringer, the city’s chief financial officer, declined to comment through a spokesperson. Public Advocate Letitia James’ office did not provide a comment for this article. She told the Times that the order was an unfunded mandate and that the state should consider taking on the costs of implementing it rather than the city.

Among the group of city officials, the order’s fiercest defender is Torres, who has in recent weeks positioned himself in close proximity to Cuomo in pushing for NYCHA’s interests and castigating the mayor’s perceived failures. “I think the mayor would be wise to view the executive order as an opportunity to improve public housing rather than a challenge,” he said in a phone interview Friday. “[T]he notion that more funding for public housing is a problem is as insulting as it is idiotic.”

Torres echoed Campion’s point that the city, not the state, will pick the emergency manager, and said it was “disingenuous” for the mayor to claim he has no role. “So I presume he would select someone who would work with the city to develop a financially feasible plan. Even if the mayor has political objections to the executive order, leadership often means making the best of a bad situation, but there’s no evidence that the administration’s even attempting to do so. It’s simply whining, rather than problem-solving,” he said.

He also brushed aside concerns that the city will have to bear more costs, insisting that activists have long pushed for $1 billion annually in funding for NYCHA and that no officials or activists have suggested using the emergency manager to fund NYCHA’s full $25 billion need. “But can the city play a greater role in addressing the most critical infrastructure needs of public housing? I would submit to you that the answer’s ‘yes’ and the executive order creates an opportunity to do so,” Torres said. “The administration has often made piecemeal investments in public housing in response to crises. The executive order forces the city to take a more systematic, a more planned approach to addressing the longer term critical infrastructure needs of public housing.”

De Blasio’s latest expense budget plan, presented Thursday, is for $89 billion for next fiscal year, while the updated five-year capital commitment plan is for $82 billion. The mayor has regularly reminded audiences, though, that NYCHA is its own authority, not a mayoral or city agency, and has its own budget plans, which the city has continued to contribute to under his watch.

De Blasio hopes to quell some of the overarching concerns about Cuomo’s executive order and optimistically said Thursday that he has had conversations with the governor to modify it.

“Even though the Governor and I have disagreements we still talk regularly. I talked to him earlier in the week,” he explained to reporters. “We still attempt to reason together...I don’t think he necessarily intended a massive unfunded mandate on New York City. I think he – I certainly don’t think he intended to interfere with day-to-day operations of NYCHA. We need to have that conversation and work it through...because the last thing you’d want is to have the state issue an executive order that backfires for the people it’s supposed to serve.”

Rich Azzopardi, a Cuomo spokesperson, tweeted Friday that the executive order would be adjusted once an ongoing federal investigation into NYCHA’s handling of lead paint concludes and “determines de Blasio’s liability” for what he called a debacle. Cuomo’s office did not respond to a request for additional comment or offer further clarity.