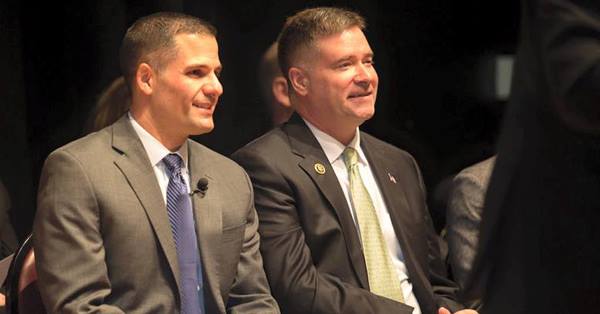 The presumptive Republican nominee for governor of New York did not vote for the Republican president of the United States.

One question Marc Molinaro was asked most often in the early weeks of his campaign to replace Governor Andrew Cuomo is whether he voted for Donald Trump in November 2016.

“I did not, I voted for Chris Gibson,” Molinaro told reporters in Albany on April 2, the day of his official campaign launch, naming the former Congressional representative who is now chair of Molinaro’s gubernatorial campaign. It was the second time that day Molinaro, currently Dutchess County Executive, had been asked the question, the first coming in the village of Tivoli, where he grew up, became mayor at the age of 19, and held his first launch event. Both times he answered quickly, and briefly, ready to move on to the next question.

A follow-up question, though: why didn’t you vote for Trump?

“I had significant differences at the time, I didn't vote for him, I voted for Chris Gibson, who would have made a fine president,” Molinaro said in Tivoli. “And this is what I tell people, and I believe it, for those that admire [Trump], they believe he says it the way he sees it, and so do I, but when he doesn't do what is in the best interest of New Yorkers, and New York families, I’ll say it, and when America and the federal government does something in the best interest of New Yorkers I’ll say it too.”

In several iterations of the same answer over the course of weeks, Molinaro has not explained the “significant differences” he had with Trump that led him to write in Gibson.

Molinaro has mentioned two incidents where Trump has disappointed him since taking office -- the president’s response to a white supremacist rally in Charlottesville, Virginia and the federal tax overhaul that severely limits state and local deductions -- but has not provided details of his issues with Trump during the campaign. A Molinaro campaign spokesperson said she thought he had been clear in his answers about Trump and did not provide more detail when Gotham Gazette inquired.

The campaign spokesperson also declined to answer repeated questions about who Molinaro voted for during the Republican presidential primary in New York, in April 2016. Gibson, meanwhile, has been a fairly outspoken critic of Trump, though he said he did vote for the Republican nominee over Clinton because he thought Trump was more likely to clean up Washington, D.C. Gibson has told the Albany Times Union, however, that Trump has not lived up to his promise to “drain the swamp.”

In August 2017, Gibson condemned Trump’s “both sides” response to the Charlottesville rally and counter-protest, writing in the Poughkeepsie Journal, “In moments like these, leadership can make all the difference. We were all counting on President Donald Trump to help us understand what happened, condemn by name the racist organizations involved, mourn the losses, and bring us together to heal. He utterly failed us.”

Molinaro’s lukewarm approach to the president does not seem to have had an impact on his ability to garner the support of key New York Republican leaders in his bid to earn the party nomination and take on the winner of the Democratic gubernatorial primary, where Cuomo is being challenged from the left by actor and activist Cynthia Nixon, both painting themselves as essential anti-Trump forces.

The Trump question could continue to prove tricky for Molinaro, who appears to want to discuss virtually anything else. There is no question that his Democratic opponent will attempt to tie him to the president and members of the media will want to know what he thinks of various Trump actions.

On the day Molinaro entered the race, Cuomo said, "They want to run a Trump mini-me in New York -- good luck.”

That same day, Geoff Berman, the executive director of the New York State Democratic Committee, released a statement saying, “it's clear that the New York GOP is intent on pushing an ultra-conservative Trump agenda, and a candidate that has the same positions as Trump with a different hair color.”

While he didn’t vote for Trump, Molinaro is loathe to explain why and hesitant to criticize the president. While Trump is deeply unpopular in New York overall, he retains strong support from Republicans in the state (Democrats hold a significant voter enrollment advantage across New York). Trump, a New York City businessman and television star, won 46 of 62 New York counties in his election against former New York Senator Hillary Clinton, though Clinton still won the state handily, 59 to 36.5 percent, thanks to dominating the population centers, including New York City.

A February Quinnipiac poll showed Trump underwater in New York at 30 percent approval and 65 percent disapproval, though it was actually a slight increase in approval for the president. Within those numbers, though, Trump had a 79-15 percent approval rating among Republicans, and a 5-93 percent among Democrats.

It looks as though Molinaro will not be forced into the difficult task of having to hug Trump in a Republican primary to then distance himself in a general election, where he almost certainly will need to win over many independents and some Democrats to win.

The Dutchess County Executive, who has held a handful of different government positions over more than 20 years in elected office, appears to have secured both the Republican and Conservative Party nominations, and their ballot lines in November. Throughout the process of seeking the backing of different county chairs of each of the two parties, Molinaro has had to answer the Trump question in public and in private.

Asked if he supports the president on the Joe Piscopo Show on AM970 radio, Molinaro said, “I support America, and when the president does something good, I’m going to stand up and say it. A lot of people say this about him and that is, he says it the way he sees it, well so do I. So when he does or says something that I can’t stand for, I have to say it as well. I did that when he spoke out, I think inappropriately, after Charlottesville. I didn’t vote for him last November, but my position is that we need America to succeed and we need New York to succeed.”

He then pivoted to criticizing Cuomo, whom Molinaro has repeatedly said “displays the very attributes he demonizes,” as he tweeted recently about Cuomo and Trump, pulling up just shy of criticizing the president while still being able to take a shot at Cuomo as a hypocrite.

Despite his coolness toward the bombastic president, the seemingly even-tempered Molinaro -- who is basing his run in part on the quality of his character, his ethics, values, and willingness to work across the aisle -- has continued to gain support from Trump backers.

“The bottom line is that I would have preferred him to vote for Donald Trump,” said Mike Long, state chair of the Conservative Party. “Marcus Molinaro’s positions on the issues are in sync with conservative Republicans, and therefore I overlooked it.”

Long said he’s spoken with Molinaro about his lack of support for Trump. “What I found out was: number one, father of young children, he at the time, what was going on in the campaign, he wasn’t comfortable voting for Donald Trump, and he felt his vote in New York wouldn’t make a difference in the outcome here,” Long said in an interview with Gotham Gazette.

“The meter is different, but on the issues they mostly see eye to eye,” Long said of Trump and Molinaro, who says that as governor he would lower taxes, rein in state spending, return more power to localities, clean up rampant corruption in state government, and improve management at the MTA. While he holds many conservative positions, Molinaro has also expressed some more moderate stances on immigration and campaign finance reform.

“Marcus is refreshing, he’s energetic, and I think he can give New York a fresh start,” Long said. “Some people may be disappointed he didn’t vote for Trump, but they’re not going to vote for Cuomo.”

New York City Council Member Joseph Borelli, a Republican from Staten Island, was an early endorser of Trump in the presidential race and continues to strongly back the president. He is also vehemently behind Molinaro for governor.

“He is a pragmatic executive, willing to work with all sides, and has a reputation as a problem-solver,” Borelli said in a statement endorsing Molinaro. “Most importantly, he has good character and a strong moral compass that guides his decisions.”

“New York City could benefit from someone like him at the helm of our state,” Borelli also said.

On whether he thinks Trump will be involved in the race personally, Long said he doubts it. “I don’t see the president getting involved at any part of the campaign. I don’t see any need for that happening. The president has his hands full dealing with the anti-Trumpers around the country,” Long said.

“Would he help Marcus? Maybe, maybe not. I don’t think it’s necessary that the president get involved.”

[Read: In Run for Governor, Marc Molinaro Will Make a Character Argument]