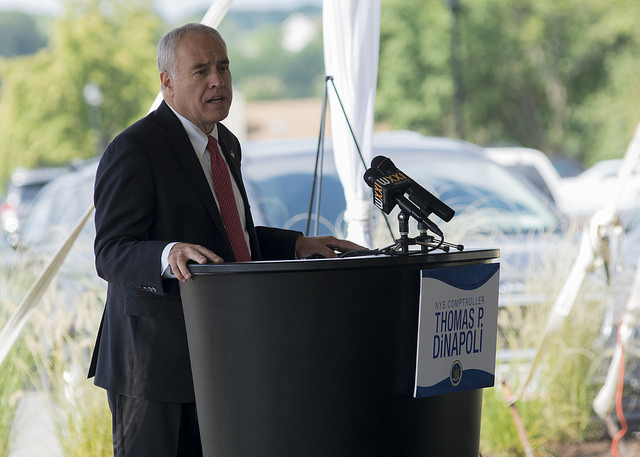 In March, Governor Andrew Cuomo and the state Legislature once again passed a budget in the middle of the night with little public review. Keeping form with past years, elected members of the Assembly and Senate voted through major budget and policy decisions that they did not know the details of, while there was also no time for feedback from outside watchdogs. The State Comptroller, Thomas DiNapoli, did release a budget report a few weeks later excoriating not only the process as secretive and unaccountable, but also the budget itself as spending billions of public dollars in an unaccountable way.

A few weeks after that, the State Senate passed a package of reform bills aimed, at least in part, at making the spending of public monies more transparent. The package of legislation has stalled in the Assembly, and the governor is largely unsupportive of the measures, which would add oversight and insight into how state economic development funds are spent, among other changes largely aimed at reining in the governor’s power.

DiNapoli’s annual budget analysis, released in April, gave the budget high marks for its augmentations to the state tax system in response to federal tax reform, with the state attempting to blunt the impact of a new federal cap on how much of their local and state taxes taxpayers can deduct from their federal taxes. Through budget legislation, the state created a new voluntary payroll tax that employers can opt into and state-funded charitable organizations that taxpayers can contribute to in lieu of paying taxes. Despite generalized praise for the attempted workarounds, DiNapoli did not say unequivocally that the measures would be good for New Yorkers, and it is still too early to tell how successful they will be.

“The extent of any federal, state, or local tax savings these new mechanisms may generate for New Yorkers is unclear,” the comptroller said in a statement.

At the same time, DiNapoli sharply criticized the extensive lump sum appropriations in the budget, where funds are earmarked to agencies and organizations without a specifically delineated purpose, allowing the money to be spent throughout the year in unaccountable ways. The comptroller’s office has, year after year, criticized the state budget for excessive usage of these funds, as have non-governmental watchdogs like Citizens Union, Reinvent Albany, and Citizens Budget Commission.

This year, $475 million of lump sum funds were appropriated in the budget for the “State and Municipal Facilities,” or SAM, program. SAM is ostensibly a fund for local capital projects statewide. In an appearance on the Capitol Pressroom radio program, however, DiNapoli described SAM as a new way of saying “member items,” itself a way of saying pork barrel spending on localized projects often disbursed for political reasons.

When Susan Arbetter, the host of the program, described SAM as a “slush fund” tapped into by legislators for anything from art projects to golf tournaments in their districts, DiNapoli said that she had described SAM “harshly but properly.” To illustrate the lack of accountability with SAM, DiNapoli noted in the report that, despite the authorization of over $2 billion in SAM funds since the fund’s inception in 2014, only about 20 percent of the total has actually been spent.

The comptroller also criticized the lack of transparency in procurement, a perennially thorny issue in New York politics.

“The Budget builds on previous years’ actions to bypass statutory provisions that are intended to promote oversight and integrity in State procurement, including eliminating competitive bidding and independent review of contracts in certain cases,” he said in the report.

The state’s problem-plagued procurement process has come under heightened criticism this year, with the conviction of former Cuomo aide and friend Joe Percoco in a bribery scandal involving the governor’s economic development projects. Percoco was convicted of receiving hundreds of thousands of dollars in bribes from contractors in return for a bid-rigging scheme ensuring they received lucrative contracts worth tens of millions of dollars.

Another trial involving larger Cuomo economic development programs, including the Buffalo Billion, and alleged abuses of the procurement process is set to start later this month. The centerpiece of the trial will be former SUNY Polytechnic Institute head Alain Kaloyeros, whom Cuomo empowered over the course of several years, and is alleged to have been part of bid-rigging on contracts that did not have the type of review and oversight such deals require, according to DiNapoli and others.

The state Senate’s reform package includes a publicly searchable “database of deals,” listing economic development awards, project statuses, and outcomes. The measure was included in the one-house budgets of both the Assembly and the Senate but died in closed-door negotiations; the governor was not in support of it. The Senate’s passage of the measure post-budget puts responsibility on the Assembly to pass it and send it to the governor’s desk for approval or veto.

Senate Republicans who hold the majority passed the bills on May 9. Most were either unanimously or near-unanimously with bipartisan support, save for S5912C, concerning prevention of “regulatory steamrolling,” and S7781, which prevents interim department heads from serving without Senate confirmation for more than 90 days during the legislative session and 30 days outside the session. Assembly Democrats who lead that chamber appear less likely to cross the incumbent Democratic governor at this time.

Also passed by the Senate were measures restoring budgetary oversight powers to the comptroller’s office, known as the Procurement Integrity Act. The legislation was proposed by Comptroller DiNapoli himself in 2016. Since 2011, Cuomo’s first year in office, the comptroller’s power of contract pre-clearance in several key areas, such as SUNY- and CUNY-affiliated nonprofits, was eliminated; DiNapoli’s budget report estimated that $31 billion of contracts had been approved without review by the comptroller’s office “for the largest areas where oversight has been eliminated” since April 2011.

The Senate also passed a bill creating a nonpartisan Independent Budget Office to review revenues and spending. Whereas the Office of the Comptroller conducts audits after-the-fact, an IBO would provide analysis before a piece of legislation becomes law. Further, the comptroller is a partisan elected official (DiNapoli is a Democrat) while an IBO would be nonpartisan.

Another bill passed in the Senate banned executive appointees from donating to the campaigns of the executive who appointed them. This was clearly directed at Cuomo; a New York Times story from February revealed that, despite banning the practice in a 2011 executive order, the governor had raised almost $900,000 in donations from his executive appointees, apparently after interpreting the order loosely.

With just a few weeks left in session, the Assembly has not signaled an intent to pass any of the bills. A spokesperson for the Assembly majority did not respond to a request for comment from Gotham Gazette.

The governor’s office, when asked about the reform package, said that the Senate Republicans were not serious about ethics reform, noting their opposition to Cuomo-supported measures such as a ban on outside income for legislators, closing the LLC loophole, and a statewide public campaign finance system.

"We proposed many items in the Sen. Dean Skelos Corruption Reform Act, so it's funny that his crony, Sen. Flanagan, only proposed them when he is facing political oblivion,” said Cuomo spokesperson Tyrone Stevens, referencing former Senate Majority Leader Dean Skelos, currently awaiting retrial for public corruption, and current Majority Leader John Flanagan. The governor’s office did not signal support for the Senate-passed measures.