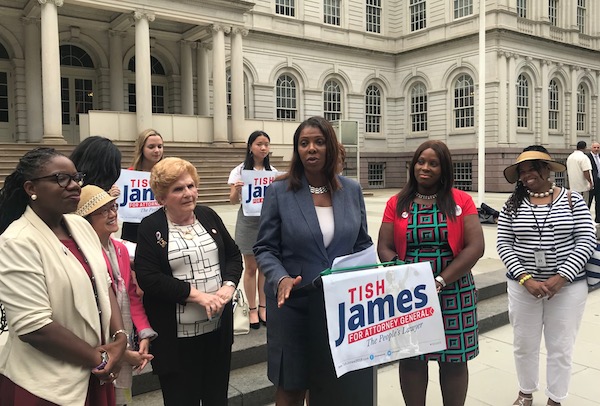 In the four-way contest for the Democratic nomination for attorney general, Public Advocate Letitia James is leading the pack but more than 40 percent of likely primary voters have yet to decide who they will support, according to the latest Siena College poll released Tuesday.

The poll, conducted from July 22 to 26, sampled hundreds of Democrats across the state that are likely to vote in the September 13 primary. James, who is the State Democratic Party’s chosen designee for attorney general, received 25 percent of the vote from those polled, ahead of U.S. Representative Sean Patrick Maloney, who polled at 16 percent; Fordham Law professor Zephyr Teachout, who received 13 percent; and Leecia Eve, a former aide to Governor Andrew Cuomo and Hillary Clinton, who polled at 4 percent. But 42 percent of those polled said they were undecided, and it is not clear that it, or any other poll, is accurately measuring who will come out to vote in September.

“It’s not surprising that the race is wide open since none of the candidates are particularly well known to voters,” said Siena College pollster Steven Greenberg, in a statement accompanying the poll’s release.

The numbers seemed to buoy the hopes of each candidate, though they all showed a lack of name recognition with voters. James seems to be the most popular of all the four, with 36 percent of voters holding a favorable opinion of her. Teachout and Maloney’s favorability rating was 27 percent and 21 percent, respectively, while Eve only had 9 percent of voters that felt the same. Mostly, voters said they didn’t know enough about the candidates to have an opinion.

New York City voters, who make up a large portion of the Democratic primary electorate, overwhelmingly chose James, with 41 percent of the vote, and she performed particularly well with African-American and Latino voters, among whom she received 56 percent and 35 percent of the vote respectively. After having become the first woman of color to win a citywide office in 2013, James, if victorious, would become the first woman of color elected to a statewide position if she wins the primary and general election for attorney general.

“Tish James’ record as Public Advocate, a City Council Member, and as an Assistant Attorney General has engendered grassroots support from New Yorkers of all backgrounds - the truest testament to the strength of her candidacy,” said Delaney Kempner, a James campaign spokesperson, in a statement. “She is solely focused on addressing the real issues that New Yorkers are facing.”

The poll showed that James has nothing to take for granted, despite the fact that she has the powerful backing of Governor Andrew Cuomo, who has helped her raise money and build her profile among voters, and is likely to do more of both ahead of primary day.

“Over the next six weeks, all of these candidates have a lot of work to do to become known to Democratic primary voters and then get them to the polls in what is likely to be – sadly – a low turnout election,” Greenberg said. “Although James has the early lead, there’s a long way to go in this race before we know which Democrat will take on Republican Keith Wofford to succeed Barbara Underwood in an election with no incumbent.”

Among suburban voters, Maloney was the more popular choice, with 25 percent supporting his campaign, compared with 15 percent for James and 9 percent for Teachout. In upstate New York, Maloney again led with 21 percent of the vote, while Teachout had 17 percent and James got only 5 percent. Maloney and Teachout had almost the same level of support among white voters, while James was behind the two.

Eve, the least known candidate, says she is undeterred. “We are energized by the strong, grassroots support we are receiving from people across New York who know that Leecia has what it takes to be a fearless and effective champion for all New Yorkers,” said Maggie McKeon, a campaign spokesperson.

Maloney’s favorability hovered between 19 and 26 percent across all categories of voters. “This race is wide open,” the Hudson Valley member of Congress said in a statement. “New Yorkers are still waiting to see which candidate can show that they are passionate enough to take the fight to Trump and experienced enough to win - and right now I am the only one who can do that."

Teachout’s campaign made a similar argument, while also stressing that the polling was flawed and did not account for the energized progressive base that has turned out for candidates such as Alexandria Ocasio-Cortez, who beat ten-term Democratic Representative Joe Crowley in the June congressional primary. “[W]e've seen that the polls aren't really great at understanding insurgent candidates, as we saw with Dana Balter," said Cristina Gonzalez, a Teachout campaign spokesperson, in a statement, with reference to the congressional candidacy of another upstart, unexpected female primary winner.

The youngest category of voters, those between the ages of 18-34, mostly supported James, giving her 43 percent of the vote, compared with 8 percent for Teachout, 9 percent for Maloney, and 6 percent for Eve. The younger demographic is one that Teachout expects to do well with given she is running her campaign furthest to the left and with the most anti-establishment fervor (James also led among voters aged 35-54 and older).

Teachout has received the backing of a number of progressive groups, elected officials, and activists, but James has more than her share as well, and despite her ties to the more centrist Cuomo, she says she is refusing to cede the progressive ground to her opponent. Still, Teachout has repeatedly made campaign pledges, like refusing corporate money and demanding hearings in Albany on sexual harassment in state government, and called on her opponents to do the same, and they have not. She’s thus far staked out the most aggressive positions and stance toward her competition, while James has been coalition-building and raising money, Eve has been campaigning around the state, and Maloney has done little on the trail while attending to business in Washington, D.C.

The four contenders are set to share the stage for a live broadcast debate on NY1 on August 28, but Teachout and Eve have both been beating the drum for a series of broadcast debates across the state. Since June, Teachout has proposed six television and radio debates in New York City, Albany, Binghamton, Buffalo, Syracuse, and Long Island. “Four years ago when I ran for statewide office voters were denied a full and frank debate,” Teachout said in a June 27 statement. “The candidates for Attorney General owe them so much better this year, especially given the widespread erosion of democratic norms post-Trump.”

Eve has floated similar terms. Maloney’s campaign has been relatively quiet on all fronts -- he has not appeared at several attorney general forums attended by one or more of the other three, a fact James made reference to on Monday when Gotham Gazette asked if she would accept the debate challenge put forth by Teachout. Maloney’s campaign said he plans to attend a forum in Westchester on Thursday night hosted by the local Indivisible chapter.

James said she is broadly open to the idea of more debates, but did not make reference to the idea of six over the airwaves. "I have a proven record of accomplishments and I have a proven record of being a progressive. I will again debate and share and compare my progressive agenda and all that I have done in the state of New York and particularly in the city of New York against any of my opponents everyday and I’m confident that I will stand the test of time,” James told Gotham Gazette on Monday, shortly after being endorsed by 10 of the 11 women elected to the New York City Council.

[Listen to appearances by Zephyr Teachout, Tish James, and Leecia Eve on the Max & Murphy podcast (Sean Patrick Maloney will be a guest August 8)]