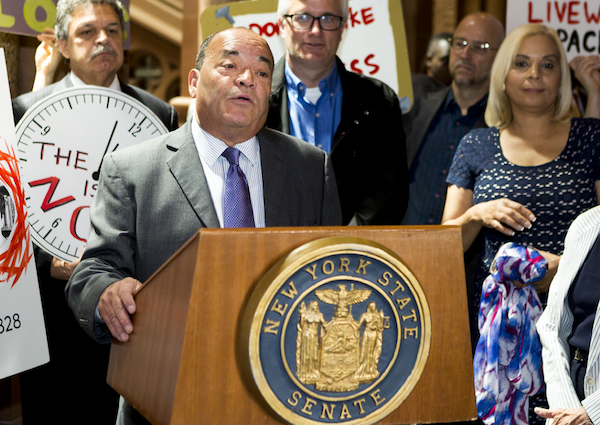 A campaign fundraising committee set up to bankroll the state Senators from the erstwhile Independent Democratic Conference was recently ruled to have been illegal by a state Supreme Court judge. Campaign finance records show that Brooklyn Senator Martin Dilan, who was never part of the IDC but is facing a tough primary challenge this year, was also a beneficiary of thousands of dollars spent by that committee for his last reelection campaign, a fact opponents are using as fodder to criticize his commitment to the Democratic base.

The Senate Independence Campaign Committee (SICC) was created in 2016 in an arrangement between the Republican-allied IDC, a conference but not political party led by Bronx Senator Jeff Klein, and the Independence Party. Klein chaired the SICC and funnelled about $1.4 million in total to his campaign and those of his fellow IDC members, allocating funds even after the IDC was dissolved in April, when its members rejoined the mainline Democratic conference. While there were questions about the legality of the SICC from its inception, there had been no legal rulings about it until recently.

A state Supreme Court judge ruled in June that the SICC arrangement was not compliant with state election law, and the state Board of Elections enforcement counsel, Risa Sugarman, subsequently called on the IDC members in a June 20 letter to return the contributions they had received from the SICC within 20 days. That deadline passed on Wednesday, and the senators have shown no indication that they intend to refund any of the donations. IDC members maintain that the issue identified by the court, which related to the party affiliation of the SICC leadership, has been resolved, and say that the judge did not order them to return any money. Sugarman declined to comment for this article.

Then or soon-to-be members of the IDC received various amounts of campaign money from the SICC last election cycle, two years ago, including about $540,000 that went to help Marisol Alcantara win a close, four-way Democratic primary, after which she joined the IDC. Like the other seven former members of the breakaway conference, Alcantara is facing a primary challenge this year.

In 2016, when Dilan was running for reelection and faced a primary challenge, the SICC spent about $8,000 in his favor. Dilan was the only member of the mainline Democratic conference to receive aid from the committee, a fact his primary opponent, Julia Salazar, a young democratic socialist, has highlighted. Dilan also got a $5,000 donation from Klein himself. “The fact that Senator Dilan accepted support from the IDC's illegal slush fund just two years ago raises troubling questions about where his loyalties lie,” said Michael Kinnucan, a Salazar campaign spokesperson, in an email. “The voters of District 18 deserve a senator who is accountable to his constituents, not to wealthy donors and Republican-linked special interests.”

Salazar, a community organizer, is running as a progressive from Dilan’s left, focusing on issues such as affordable housing, healthcare, and immigration while refusing donations from the real estate industry, which has been generous to Dilan and, even more so, to Klein and the IDC. She has criticized Dilan’s record, particularly on housing and tenant protections, over his eight terms in office, highlighting the rampant gentrification that has hit the northern Brooklyn district, which includes Williamsburg and Bushwick, and taking aim at his vote for vacancy decontrol, which he has since disavowed.

Graham Parker, a spokesperson for Dilan’s campaign, issued a scathing response to his opponents’ criticism of the SICC expenditures, without mentioning Salazar’s name at all. He said Dilan “was not considering, and has not considered leaving the Senate Democratic Conference.”

“These attacks and accusations only serve to hide who the opponent really is and who really backs her candidacy,” Parker said in an email. “[Salazar] has nearly $50 thousand in unitemized contributions. She hosts lavish fundraisers with Wall Street executives. Most all of her money is from out of the district. She lives in luxury, and decries displacement. She's a republican one year, a socialist the next. She is the exact opposite of what’s been portrayed. It’s fitting the [Working Families Party] supports her; they haven’t been about workers or families in a decade. It’s why the laborers left, and now support the Senator.”

The funds behind the SICC came from donors who are more often linked with Republicans -- including the real estate and charter school sectors -- which is anathema to several progressive challengers who are taking on Democratic incumbents across statewide races. At a Thursday news conference on the steps of City Hall, four of the eight candidates challenging the former IDC senators excoriated them for refusing to give the SICC funds back. They were joined by Bill Lipton, political director of the New York Working Families Party, which has endorsed the challengers as well as Salazar.

“I think it’s a really important data point that defines a certain type of Democrat,” Lipton said of the SICC expenditure for Dilan, shortly after the news conference. “That you would be willing to take money from a party that openly supports Republicans for Congress, openly has supported Republicans for state Senate and the money itself...it comes from some of the wealthiest people in the world. These hedge fund and real estate barons are extremely powerful and they support the Independence Party and they support candidates like Dilan and the IDC because they want their interests protected.”

The SICC money “suggests that he’s IDC-friendly,” Lipton said. It’s not clear if there was ever anything further than the 2016 expenditure to indicate that the IDC was recruiting Dilan or if he was at any point considering joining the breakaway faction. Dilan has had harsh words about the IDC in the past, saying in 2014, “They’re not Democrats, no matter what they say. They should all be disenrolled by the Democratic Party.”

Barbara Brancaccio, a Klein spokesperson, did not address the Dilan expenditure but had caustic criticism for the IDC challengers and the WFP. “There is no legal basis for returning these funds and the account is fully compliant, unlike their Working Fraud Party, who continues to violate finance and election laws in campaigns throughout New York State,” she said in a statement, before identifying three challengers to former IDC senators by name and making apparently unsubstantiated allegations against them.

“The recent flood of endorsements for Julia Salazar and IDC challengers demonstrate how electeds and key institutional players are following the cues of progressive grassroots activists,” said Susan Kang, a spokesperson for No IDC NY, a group opposing the former IDC members which has its own multi-candidate campaign committee. “Incumbents like Dilan with deeper connections to the real estate interests than his own constituents are out of the step with the current political moment,” she added.

The primary is September 13.