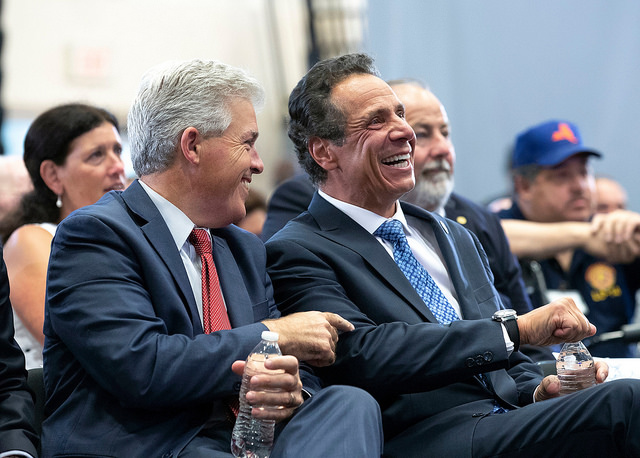 The primary election is next Thursday, September 13, and candidates for statewide office filed another round of campaign spending and fundraising reports this week, the final disclosures due before primary day.

Governor Andrew Cuomo, a two-term Democrat, has been, for the most part, publicly nonchalant about his primary challenger, actor and activist Cynthia Nixon. But his campaign finance filings show he is spending far more to beat back her insurgent bid than he did four years ago, when he faced a primary challenge from Fordham Law professor Zephyr Teachout (who is running for attorney general this year).

Cuomo’s campaign spent $8.5 million and raised $184,000 between August 9 and August 31, the latest filing period. But the governor began the campaign with a massive war chest and still has $16 million left to spend, though only some of it is eligible for spending during the primary due to campaign finance rules. In total, this election cycle, he has raised $35.6 million and spent $25.6 million, far outraising and outspending any other candidate for any race, including Nixon.

The governor’s campaign transferred more than $2.5 million to the New York State Democratic Committee, of which Cuomo is the de facto head. The state committee has been spending large amounts of its funding to run ads in favor of the governor’s reelection, even as Cuomo’s own campaign spent nearly $3 million to buy ads in this latest period through Jersey City-based firm Media Fortitude Partners. The Cuomo campaign also doled out nearly $1.2 million to Bully Pulpit Interactive, a communications firm.

Just Wednesday morning, the state committee released its latest ad featuring Cuomo, Lieutenant Governor Kathy Hochul, who is running for reelection, and New York City Public Advocate Letitia James, who is seeking the Democratic nomination for attorney general and is the state party’s official designee for the post. “They are our team to take on Trump and win,” the ad states, in line with the governor’s tactic of making the race about the Republican president rather than his upstart opponent.

“The Governor has proudly delivered unprecedented support to elect the entire Democratic ticket – proven leaders Cuomo, Hochul, and James – on Thursday, Sept. 13 because he believes this is the strongest possible team to fight back against Trump’s destructive agenda," said a Cuomo campaign spokesperson in an email. "The governor will continue to lead the way with his aggressive coordinated campaign as we work to take back the U.S. House , State Senate and build the Party’s infrastructure moving forward." The spokesperson also noted that the governor has made a six-figure ad buy targeting Republican gubernatorial nominee Marc Molinaro in order to get a leg up on the general election (Molinaro sought to have the ads pulled, accusing the Cuomo campaign of disinformation.)

Nixon’s numbers are paltry in comparison to Cuomo’s, though her campaign is banking its longshot on a very different type of strategy than the incumbent’s. Over the course of the race, she has raised a total of $2 million and spent about $1.3 million. She has not yet run any television ads, insisting that her campaign’s digital and social media operation is far more effective to reach the voters she is targeting. On Wednesday, her campaign released a new ad dinging Cuomo on his mishandling of the crisis affecting the city’s subway system. The campaign told Gotham Gazette it will be pushed out on social media including a Facebook ad buy.

Nixon also said in an NY1 interview on Monday that she does not plan on infusing her own personal funds into her campaign. She raised about $475,000 in this filing and spent just over $450,000. She had about $467,000 in cash on hand for the final two weeks of the campaign. Having rejected corporate and LLC donations, Nixon’s fundraising came mostly from small donors who gave less than $200, a fact her campaign has repeatedly touted while pointing out Cuomo’s propensity for raising money from wealthy donors and through the LLC loophole (which allows obscured donors to circumvent contribution limits).

“We are seeing an unprecedented level of grassroots momentum from New Yorkers,” said Nixon’s campaign manager, Hayley Prim, in a statement Wednesday. “There is a real hunger in New York to elect a real progressive who is beholden to the people, not corporations and millionaires. And since the debate, we’re seeing that momentum build like never before.”

Nixon’s campaign paid the Working Families Party $58,800 from her campaign coffers. The WFP has endorsed Nixon and has been mobilizing volunteers to canvas on her behalf. In fact, the in-kind contributions from the WFP to Nixon’s campaign -- in the form of phone banking, texting and canvassing efforts -- amounted to nearly $86,000, according to filings.

Lieutenant Governor Kathy Hochul, a Democrat running for a second term, also faces a primary challenge, hers from New York City Council Member Jumaane Williams. Hochul’s filings show she raised $356,000 and spent more than $1.5 million in the latest disclosure period, leaving her with about $389,000 in cash on hand. Hochul also availed of the services of Media Fortitude Partners, using $1.4 million of that spending on television ads. So far, Hochul has raised a total of more than $2 million and spent about $1.9 million on her reelection.

Williams continues to struggle to raise funds for his campaign but has shown stiff competition to Hochul in a race that increasingly looks as if it could be close. Williams raised only $62,000 and spent about $38,000 in this latest filing, and filed just under $72,000 in cash on hand. In total, he has raised $270,000 -- he was forced to refund tens of thousands of dollars in over-the-limit contributions -- and spent $177,000. Williams said during a recent debate with Hochul, the only of the campaign, that he is still making payments to return the over-the-limit donations and pledged to be in full compliance by the end of the campaign.

There is no Republican primary in any of the statewide races. Candidates for governor and lieutenant governor run separately in a primary and on a joint ticket in the general election. The winners of the Democratic primary will face Republican gubernatorial nominee Marc Molinaro, the Dutchess county executive, and his running mate Julie Killian, a recent state Senate candidate.

Besides Letitia James and Zephyr Teachout, two other candidates -- Congressional Rep. Sean Patrick Maloney and Leecia Eve, a former Verizon executive who has been an aide to Hillary Clinton, Joe Biden, and Cuomo -- are vying for the Democratic attorney general nomination. The winner will go on to face Republican Keith Wofford and others in the general. The four-way contest was triggered by the resignation of Eric Schneiderman after allegations reported in May by The New Yorker that he had physically abused several romantic partners. The race to replace him has turned into the most competitive on the statewide level, though James is backed by Cuomo and the state Democratic Party.

James raised $428,000 and spent $767,000 in the latest filing period, giving her just over $867,000 for the remainder of the race. She has raised more than $2 million over the course of the campaign and shelled out $1.1 million so far. Most of her latest expenditures went to the Hamilton Campaign Network, a consulting firm working for her campaign that has also been purchasing digital and television ads and sending out mailers to voters.

James’ campaign has been beset with criticism over her perceived lack of independence from the governor, and momentum has been building behind Teachout’s campaign, while Maloney remains a formidable opponent as a sitting member of Congress with significant funds. Teachout was endorsed last month by the New York Times editorial board and, just on Tuesday, by New York City First Lady Chirlane McCray, with the Daily News editorial board in between. Then, on Wednesday, New York City Council Member Jimmy Van Bramer rescinded his earlier endorsement of James and backed Teachout instead, telling the New York Daily News, “I believe that her independence from all of the power brokers, including the governor, is something that we should all want in an attorney general.” This echoed a somewhat similar recent decision made by Council Member Ritchie Torres, who changed his endorsement of James to a co-endorsement with Teachout, while also declaring he prefers Teachout and plans to vote for her.

Maloney has been flush with cash since the start of the race, and has raised a total of $2 million while spending nearly $3 million. He raised almost $1.7 million in the latest filing period -- $1.4 million came in transfers from his congressional campaign account -- and spent $1.9 million at the same time, leaving him about $490,000. A significant amount of money went to media buys through Canal Partners Media, a firm based in Atlanta. Maloney is also up for reelection to his current seat and has said he will drop his name from the November congressional ballot if he wins the attorney general primary.

Eve has trailed the pack in fundraising and name recognition, though she was recently endorsed by the Albany Times Union and was even the New York Times’ second pick in the race behind Teachout. She raised $139,000 and spent $255,000 in the latest filing, and had less than $43,000 left to spend. In total, she has raised $382,000 and spent $351,000 since entering the race. She also loaned herself $100,000 in personal funds in this filing.

Note - This article has been updated with comment from the Cuomo campaign.