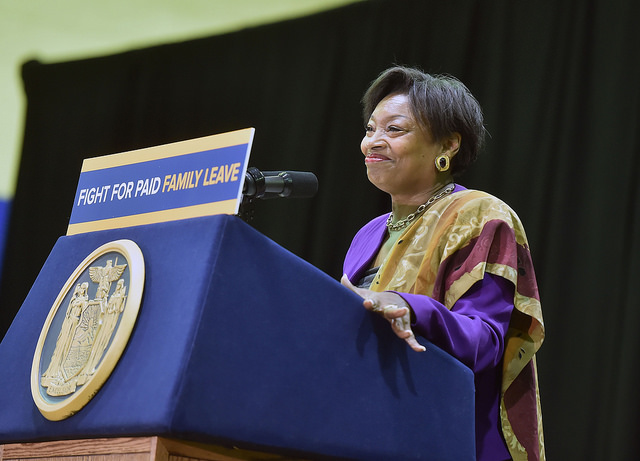 After the election results from earlier this month, Andrea Stewart-Cousins is set to become majority leader of the state Senate and, beginning in January, to preside over the chamber as it works with Democrats in charge of the Assembly and Governor Andrew Cuomo, a Democrat headed into his third term, to address a long-delayed liberal agenda. Stewart-Cousins, who represents parts of Westchester, will become the first woman and first woman of color to lead a legislative chamber in New York.

Appearing on the Max & Murphy program on WBAI radio, Stewart-Cousins discussed her approach to leading the Senate, outlined a few priorities for the upcoming session, explained some ways in which Democrats will differ from Republican who have led the upper chamber, and commented on becoming one of three people who will be in “the room,” ultimately making major decisions about the state budget and legislation along with Cuomo and Assembly Speaker Carl Heastie.

When asked, Stewart-Cousins mostly demurred about what issues would be at the top of the Senate agenda, saying that, especially with 15 new members in her roughly 40-member majority conference, senators would first need to meet and discuss how they will approach the upcoming legislative session.

“I have avoided that ‘my first hundred days will look like this’ and ‘this is the batting order,’” Stewart-Cousins said, repeating the terms of the question from one of the hosts. “Because I think the first and foremost thing we’re going to do is [create] the type of conference and senators that people have frankly been voting for again and again and not been getting.”

However, some policies she did mention were those that had already been set as first-order-of-business and seemingly non-controversial among virtually all Democrats: early voting, the Child Victims Act, and the Reproductive Health Act. These are among many policies Stewart-Cousins said “have not been able to move under Republican leadership for so many years” that Democrats plan to get to.

Stewart-Cousins noted that she has faith in the new members of the Senate, some of whom are part of a younger and more progressive movement that successfully claimed many of the seats formerly held by members of the Independent Democratic Conference, a breakaway group that had formed a coalition with the Republicans, at times giving them the seats for a majority. While these new members certainly won’t cut deals with Republicans, they still may not be on the same page with more senior members of the body, perhaps pushing for different, more progressive priorities like single-payer health care.

“We have 15 brand new members and we have to make sure everyone is up to speed,” Stewart-Cousins said. “I am so impressed with every single one of them that I have no doubt that the leadership they will provide, along with my current members, will be absolutely outstanding.”

Stewart-Cousins was also hesitant to name specifics when asked what legislation she sees as being tougher to pass, suggesting with a laugh that there could be conflict about anything and everything.

“I almost want to say all of the above because, you know, we’re Democrats,” she said with a chuckle. “I think everyone agrees on the outcomes we want, it’s just how to get there.”

Stewart-Cousins stressed her belief that Democratic takeover of the Senate is a major step forward for the state, as rather than having to debate over why policies that, for example, raise the minimum wage or ensure access to quality affordable healthcare, are necessary, the new Democrat supermajority will only have to decide on how to best design said policies.

“We’re not starting at convincing people that these things are important,” she said. “Now we’re starting a conversation where we understand [what] the objectives are.”

“Guess what, we’ll have a conference that is willing to acknowledge climate change and therefore, work towards ensuring our planet’s future,” she continued.

While expectations are high about addressing climate change, criminal justice reform, gun control, voting and campaign finance reform, tightening rent regulations, and more, there have been concerns that if Democrats were to flip the Senate and full control of state government that taxes would go up in order for the new regime to pay for all its new programs. But, during the campaign and since, Stewart-Cousins and others in her incoming majority have said they have no plans to raise taxes, an approach in line with Cuomo’s, but not necessarily Assembly Democrats.

Asked on Max & Murphy if she is indeed committed to not raising taxes, Stewart-Cousins reiterated her stance, and pointed to the federal tax reforms passed in late 2017 that are likely to negatively affect many New Yorkers due to the new cap and local and state deductions from federal tax obligations.

“We are not coming in there to raise people’s taxes,” Stewart-Cousins said. “We understand that New York is a big state and we understand that we need to make sure that it is affordable. I’m personally concerned about the impact of this federal tax bill on the New York taxpayers, and I think most people in our position are.”

Taxpayers will find out if Democrats stay true to their promise in their first big test: the next state budget, which Stewart-Cousins and her conference will have significant influence on, as the new Senate majority leader negotiates with Cuomo and Heastie. As the first woman to lead a legislative majority, she will be entering that negotiating room that has been male-dominated. When asked what that may mean, Stewart-Cousins said it shows progress made and more to do.

“I think it means that people see that once again another glass ceiling, marble ceiling, whatever you want to call it, has been broken,” she said. “We make certain assumptions about how far we’ve come, and we have in many ways, but I think everyday we’re also being reminded that there is more ground that has to be covered more ceilings to break.”

When asked if she has any plans on how to change the backroom process that often leads to major budget and legislative agreements that are voted on with virtually no public review, Stewart-Cousins said she couldn’t yet say.

“It’d be impossible to say, because I’ve never been in it,” she said, pausing to laugh. “I’m interested to see how this thing really works as well. I’m sure I’ll have a lot of opinions once I’ve actually been part of it.”

When it comes to those outside the Democratic conference, Stewart-Cousins said that she has not spoken to any Republicans who want to switch conferences, but would be happy to meet with Senator Simcha Felder, a Democrat who previously gave Republicans a one-seat majority in the Senate, about his role in the upcoming session. She said Felder had reached out and they would set something up, though he is not expected to command any special perks as he had from Republicans for helping give them the majority.

Of the former IDC members who kept their seats, Senators Diane Savino and David Carlucci, Stewart-Cousins said they have been and continue to be part of the Democratic conference, which they returned to in an April deal reached by Governor Andrew Cuomo.