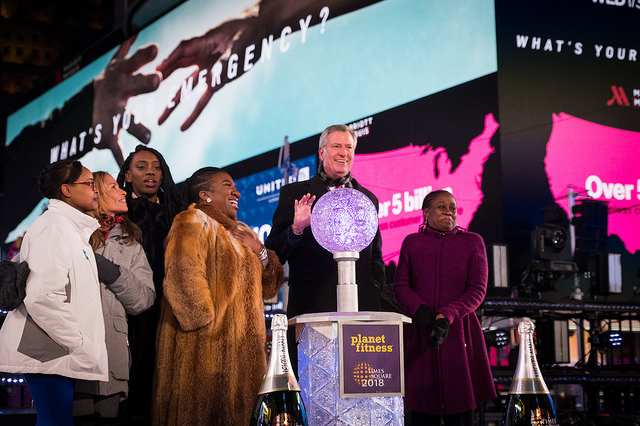 As we usually do around this time of year, Gotham Gazette asked New York politicos to look into their crystal balls for predictions for the year ahead. Below you'll find insights from elected officials, advocates, analysts, and others who are tuned in to New York politics.

We know that 2019 will be interesting given that Democrats are taking full control of state government, there's a new New York attorney general, there will be a new New York City public advocate, the MTA and NYCHA must be rescued, and more. But what *exactly* will happen? Read below for some ideas.

The new round of political predictions, these for 2019, is below.

Have something to add to the conversation? Tweet @GothamGazette with your prediction for 2019 in New York Politics

Predictions for 2019 in New York Politics

Eric Adams, Brooklyn Borough President
-Meatless Mondays will take the city by storm, and government agencies will take a fresh look at their food procurement policies, with both public health and climate change in mind.

Keith Powers, New York City Council member
-The L train closure will cause transportation woes, but construction will remain on schedule in 2019. Consider me an optimist.
-The City and State will take on voting reform ahead of 2020, including early voting in the state and ranked choice voting in the city.
-City Hall hosts a Yankees World Series parade in 2019.

Carol Kellermann, president of Citizens Budget Commission
-The City Property Tax Commission makes a proposal for a more fair and transparent property tax structure and it is enacted by the NYS Legislature.
-In its upcoming contract negotiations the TWU proposes a three year wage freeze to help address the serious fiscal stress on the MTA.

Kathryn Wylde, president of Partnership for New York City
-Business and labor will unite behind Governor Cuomo’s bold plan to restructure the MTA and fund its modernization with congestion pricing and smart legislators will bite the bullet and sign on.

J.C. Polanco, professor and former Republican candidate for public advocate
-The new Senate Majority will soon experience growing pains the likes Mike Seaver wouldn't even fathom. They'll discover that New York is diverse and I am not referring to race, gender or ethnicity. If it is not less New York City-focused and more New York State focused, many of those suburban districts won during the blue wave may revert to the GOP.
-This is the year that we see Ruben Diaz Jr. and Scott Stringer begin to cement their positions as top two candidates to succeed Mayor de Blasio.
-After being elected attorney general, sky is the limit for Tish James, now clearly the one to beat for governor in 2022. She will gain national prominence as she puts into action what she has promised us all along -- a complete Mueller-style investigation into the Trump Organization, with subpoenas and indictments flying out of her office en masse. If the Democrats win the White House in 2020, no question she would be in the short list for U.S. Attorney General.

Boris Santos, chief of staff to State Senator Julia Salazar
-The State Assembly plays an integral role in thwarting legislation that they would have otherwise passed during the reign of the IDC (legislation that they'll pass the buck on: NYS Health Act and the Climate Community Protection Act). I hope the NYS Assembly proves me wrong!
-We'll bear witness to the biggest public action/rally in Albany by New York tenants only to see Governor Cuomo get rid of certain loopholes and not extend rent protections to every single tenant in our State. I hope the Governor proves me wrong!
-Mayoral control of schools gets extended but for the first time we'll get to see electeds (i.e. Senator Salazar and others) finally be creative and propose a revised governance structure to our educational system.

Jonathan Bowles, executive director of Center for an Urban Future
-The new Congress cuts a deal with President Trump that finally brings federal funding for a new rail tunnel under the Hudson River.
-Amazon comes to Long Island City after announcing that it will reject all discretionary tax incentives and make a major new investment to bolster subway service in Queens.

Bob Liff, senior vice president at George Arzt Communications
-Marijuana will be legalized by April, but the legislators will be so stoned they will lose the paperwork and fail to get it to the governor.
-The Staten Island secession movement will re-emerge, followed by a campaign to make New York City the 51st state, followed by an attempt by Brooklyn to reverse the 1898 municipal incorporation.
-Hipsters frustrated by the L-train closure will attempt to flock to Borough Park – it will not go well.
-The Mets will win the National League East.

Joanne N. Smith, Founder/CEO of Girls for Gender Equity
-In 2019, the youth of New York will continue to rise up and speak out against injustice, and they will be supported in their efforts by any politician who wishes to have a future in this state.
-We will win the fight to change policies that turn public classrooms into junior prisons and that our schools, workplaces and other institutions will begin to prioritize addressing sexual violence, thanks to the work of the 'me, too' movement and its partners.

Heath Brown, professor at John Jay College
-By summer, Beto O’Rourke, Stacey Abrams, and Andrew Gillum will all visit Manhattan to step up exploration of presidential runs in 2020. The "invisible primary" will be anything but invisible this cycle and the money race will be focused on demonstrating as much small-dollar as big-dollar fundraising potential.

Jeff Foreman, director for policy and advocacy at Care for the Homeless
-Assemblymember Andrew Hevesi’s Home Support Stability bill to increase the “shelter allowance” for people on assistance in New York for the first time in decades finally gets a vote, and if it’s enacted it’s a step to actually reducing homelessness in New York City.
-The 7 train continues it’s unreliable and way overcrowded service causing Long Island City residents (where I live) even more anxiety about Amazon and it’s huge new headquarters.
-Consensus is that the Mets will win the NL East, but of course they won’t.

Marissa Hoechstetter, activist
-2019 will be the year of the survivor in New York State. Legislators at all levels of state and local government must listen to firsthand testimony of those directly and indirectly harmed by sexual harassment, assault, and abuse. Whether through long overdue, and as yet unscheduled, public hearings on sexual harassment in Albany, a hearing in the New York City Council about a proposed law allowing mothers like me to remove abusive doctors’ names from our children’s birth certificates, or an honest commitment by law enforcement officials [like Manhattan District Attorney Cy Vance] to act on behalf of those seeking help regardless of wealth, victim-informed laws and policies must be front and center for legislators and electeds. If not, constituents will vote them out.

Eli Valentin, professor at Monroe College
-Jumaane Williams and Melissa Mark-Viverito are the top two contenders in the public advocate special election. Mark-Viverito wins, making her the first Latina to be elected citywide.
-Recreational marijuana passes the Legislature and gets Cuomo’s stamp of approval.
-Legislators get their long-awaited pay raise, with limits (though not outright ban) on outside income.
-Nothing will be done, yet again, on much-needed election reform.

Aaron Carr, executive director of Housing Rights Initiative
-Vacancy decontrol will be repealed.
-Early voting will be enacted.
-The LLC loophole will be closed, eliminating a major liability for Governor Cuomo, who has long promised to close the LLC loophole only to become the biggest beneficiary of it since its creation.

Have something to add to the conversation? Tweet @GothamGazette with your prediction for 2019 in New York Politics. (Review the predictions for 2018 here)