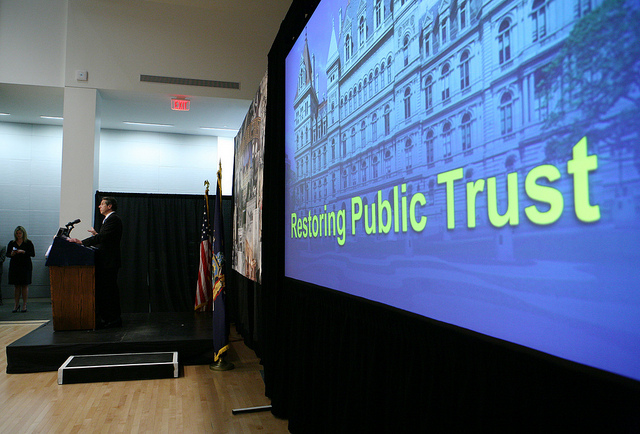 As the state Legislature returns to session on Wednesday with Democrats in control of both chambers for the first time in a decade, State Senator Liz Krueger of Manhattan and Assemblymember Robert Carroll from Brooklyn are set to introduce a resolution that would amend the state constitution, adding new provisions to prevent and combat public corruption.

The resolution, first introduced late in last year’s session, would add a new section on state government integrity to the state constitution and would consolidate two agencies that are currently charged with monitoring and tackling corruption -- the Joint Commission on Public Ethics (JCOPE) and the Legislative Ethics Commission -- into a new New York State Commission on Government Integrity. The effort is aimed at dealing with a long-standing problem in New York state government that recently saw the leaders of both houses of the Legislature convicted of public corruption, along with many other legislators who were removed from or left office due to ethical issues over the course of decades.

“We think this is the way to create a truly independent ethics body,” Assemblymember Carroll said in a phone interview on Tuesday, shortly after a rally outside the State Senate chambers alongside Senator Krueger and a cohort of government reform advocates. One of the central criticisms of JCOPE, which was created in 2011, is that it is too closely tied to the governor and legislators to be effective, making it a limited deterrent and a weak enforcer.

The proposed resolution would have to be passed by the current Legislature and again by the next elected Legislature in the 2021-2022 session, after which it would be presented to voters as a ballot question for their approval. If successful during this session and in 2021, Carroll estimated that the new law could go into effect by January 2022.

It would create the new nine-member commission -- five of whom would be appointed by the judiciary; two appointments jointly by the governor, comptroller, and attorney general; and two by legislative conference leaders whose parties are the top-two voter getters in a previous gubernatorial election. The commission would be empowered to issue civil sanctions and censures against legislators, would be able to suspend, demote, or terminate a non-elected employee, and make referrals for criminal prosecution. It would also serve as an independent counsel to legislators and state employees seeking informal ethics advice that can later be used in their defense. Those who have served as political party officials, state employees or lobbyists within the previous three years would be barred from being appointed.

Though the proposal does not require Governor Andrew Cuomo’s support, Carroll hoped that it would receive it nonetheless. “I hope the governor sees this is a major ingredient in reforming our broken political system in Albany,” he said.

During the only general election debate against his Republican opponent Marc Molinaro, Cuomo had signalled support for reforming JCOPE. “Change begins with the thin edge of a wedge,” Cuomo said, using a phrase he has often employed, in this case to indicate that he was pleased to accomplish something on ethics reform, and can then use it to do more.

He added, “I believe we need more independence on JCOPE, I believe we need totally independent appointees and not necessarily representatives of both houses. I’d be open to a number of configurations, but they’d have to be independent.” In a statement on Tuesday, Hazel Crampton-Hays, a spokesperson for Cuomo, reiterated that stance, but stopped short of endorsing the Carroll-Krueger plan: “As the Governor has previously said, we are open to changes to the structure of ethics enforcement and we will review any proposals that are introduced.”

Both Carroll and Krueger, Democrats like Cuomo, argue that a constitutional amendment is essential, particularly with renewed attention in this last election cycle to the activities of JCOPE, headed by Seth Agata, a former Cuomo aide nominated by the governor and appointed as executive director by the agency's commissioners in similar fashion to his predecessors. The state agency, which monitors lobbying at the state level besides ethics violations, has been widely criticized as inefficient and overly vulnerable to political interference, while at the same time being entirely opaque to the public and lacking clear jurisdiction.

In particular, Krueger said the agency has failed to investigate incidents and allegations of sexual harassment, even when they are made widely known. For instance, in January 2018, then-State Senator and Independent Democratic Conference leader Jeff Klein was accused of forcible kissing a former staffer, Erica Vladimer, but JCOPE has yet to make clear whether it is investigating the claim and has not provided any information to either the public, press, or Vladimer in the year since since she spoke out. JCOPE officials have pushed back against such criticism, noting that divulging information about investigations is against the law. At a March 2018 meeting, Commission Chair Michael Rozen said the agency's silence does not indicate action or inaction. "No conclusions should be inferred by the Commission’s silence," he said.

The new agency, on the other hand, would have to establish a dedicated unit for sexual harassment investigations and would also have more expansive transparency provisions, being subject to the same Freedom of Information Law that currently applies to the executive branch (there are ongoing negotiations about extending FOIL to the Legislature).

Last year, JCOPE’s lack of transparency was put to the legal test. New York Republican party chair Ed Cox and Molinaro, the Republican gubernatorial nominee, sued the agency to force a vote on an investigation into Joe Percoco, the former top Cuomo aide who was convicted on federal corruption charges last year. During the trial, Percoco was found to have improperly used his executive chamber office while working on Cuomo’s campaign, but he was never investigated by JCOPE. On December 19, a state supreme court judge ruled that the agency must take a vote within 30 days and then inform the judge, though they were not ordered to release the details of the vote to the public.

“I don’t think that current model is working and I think we need to fix that...It’s just not designed to do its job,” Krueger said of JCOPE in a December interview. She and Carroll were joined at the state Capitol building on Tuesday by representatives of groups including Common Cause New York, Reinvent Albany, the League of Women Voters of the State of New York, the New York Public Interest Research Group, the New York City Bar Association, as well as a few legislators, such as Senator Jen Metzger and Assemblymembers Richard Gottfried and Carrie Woerner.

What remains unclear is whether the leaders of both legislative chambers will support the proposal. Requests for comment to Assembly Speaker Carl Heastie’s and Senate Majority Leader Andrea Stewart-Cousins’ offices went unanswered.

Note - this article has been updated to clarify that Seth Agata was appointed by JCOPE commissioners, not the governor. It has also been updated to include public statements made by JCOPE chair Michael Rosen about why the agency does not comment on investigations.