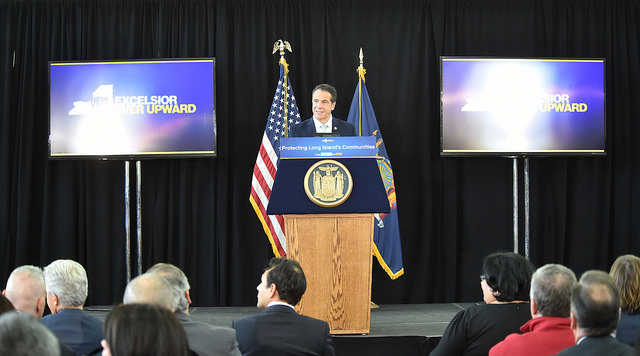 The 2020 state budget agreement between Governor Andrew Cuomo and the state Legislature is one of the most consequential legislative packages to have passed in several years and enacts sweeping changes to the state’s criminal justice system, mass transit in New York City, voting laws, health care, environmental protections, and more. But government reform advocates are disappointed by what they see as half-measures on campaign finance reform and the exclusion of broader improvements to state procurement processes and government ethics reforms.

Over the last three months, the state Legislature, under Democratic control for the first time in nearly a decade, quickly acted to pass several voting and campaign finance reforms that Democratic elected officials and candidates, including Cuomo, have backed and campaigned on for years.

The Legislature approved early voting, consolidated the state and federal primary into one day in June, enacted pre-registration of 16- and 17-year-olds, and reduced contribution limits for limited liability companies to $5,000, greatly narrowing the infamous “LLC loophole.” Cuomo signed those bills into law. The Legislature also passed resolutions to amend the state constitution to allow no-excuse absentee ballots by mail and same-day voter registration -- the resolutions will have to be passed again by the next Legislature seated in 2021 and will then have to be approved by voters in a referendum.

The budget deal passed early Monday morning included additional measures and funding for voting, election, and campaign finance reforms approved in previous months. The headline, though, was the compromise to mandate a binding commission that is meant to create a public financing program for state elections and must issue a report by December 1. The commission’s recommendations will become law unless the Legislature overrides it during a special session before the end of the year.

“On public integrity and anti-corruption issues, the governor and the Legislature have fallen short because they failed to put reforms in statute,” said Alex Camarda, senior policy advisor at Reinvent Albany, a government reform group. “On voting, they’re making very good progress in modernizing the state’s voting system...the Legislature and the governor have exceeded expectations I’d say. That’s really the lone bright spot on good government in the budget.”

Campaign Finance
The governor and Legislature couldn’t come to an agreement on implementing a public financing system with lower contribution limits for candidates and a small-donation matching program, owing largely to opposition in the state Assembly where Speaker Carl Heastie publicly raised doubts about having enough votes to approve the proposal, despite prior support for such a program when Republicans controlled the Senate.

In the end, the budget agreement sets the state on the road to creating a system through a commission, which will have binding authority and $100 million in appropriations (the Legislature can still amend the commission’s recommendations within 20 days of the report being released). “It is too complicated,” Cuomo said at a news conference on Sunday of approving a public financing model. “It’s not a simple system to put in place, it’s especially not simple statewide.”

Advocates say there isn’t enough clarity in the commission’s guidelines and have vowed to hold the feet of the governor and Legislature to the fire. The Fair Elections for NY coalition called the budget a “missed opportunity” to enact reform. The coalition of advocacy, community, and labor groups organized a massive push for a public financing program modelled on the one used in New York City, calling for a 6-to-1 match in public funds for every qualifying dollar that a candidate raises through the program (the city’s program was recently expanded to an 8-to-1 match).

“The value of this commission will be determined by the quality of its appointees and the public process it offers to allow every day New Yorkers and experts to shape the outcome,” the coalition said in a statement. “We intend to hold our elected officials accountable to their promises and make sure New York actually delivers a historic victory without poison pills.”

Michael Waldman, president of the Brennan Center for Justice at NYU School of Law, said a public financing program should have been included in the budget, considering that Democrats have been pushing it for years. “Now that the task is put to a commission, the leaders must act swiftly to appoint qualified, independent members with a track record of public service, and a commitment to creating a robust small donor public financing program,” he said in a statement. “All must ensure a participatory process that is transparent to the public. Nothing less is required to secure the public’s trust.”

Nine commission members will be appointed -- two each by the governor and majority and minority leaders of both legislative chambers. The final appointee must be chosen through consensus by all of the appointing parties and approved by the governor. Camarda from Reinvent Albany noted that the commission will have to approve a system through a majority vote, which is not guaranteed, nor is a 6-to-1 match or any independent enforcement of a new system. Camarda also pointed out that New York’s sky-high contribution limits for those who do not opt in to the program won’t be lowered, disincentivizing candidates from participating.

When laying out his 2019 agenda late last year, Cuomo had called for completely banning corporate donations to political candidates, but that measure did not make it into the budget.

Another Cuomo proposal that was not included in the budget was a complete closure of the so-called LLC loophole. LLCs allow individuals to circumvent contribution limits by shielding the identities of donors and, until recently, had the ability to donate as much as $65,000 to gubernatorial candidates. The Legislature brought those donation limits down to $5,000, in line with limits for corporations, but that does not completely preclude the loophole from being exploited.

The governor had also proposed greater donor disclosure requirements for 501(c)(3) and 501(c)(4) nonprofit organizations, which he said were contributing to a plague of independent expenditures in state elections, but some charged was another attempt by the governor to target groups that have been critical of him. Those proposals were left out of the final budget as well.

Voting and Elections
The final budget agreement includes $10 million in funding to localities to implement a 10-day early voting program, approves three hours (up from two) of paid time off on election day, authorizes electronic poll books with $14.7 million in funding, and expands voting hours at upstate polling sites to bring them in line with New York City and its surrounding suburbs (6 am to 9 pm).

The budget also mandates that the Board of Elections create an online voter registration system that allows voters to submit applications with electronic signatures. Advocates and elected officials had also tried to push the Legislature to approve automatic voter registration for the state, but to no avail.

Ethics
Though the governor had proposed several government ethics reforms in his executive budget proposal, barely any made it into the enacted budget. The proposals included mandated disclosure of tax returns by candidates for elected office, expanding the state’s Freedom of Information Law to the state Legislature (it currently covers the executive branch), banning state employees from volunteering on their employers’ election campaigns, and a “Lobbying Code of Conduct” to penalize violations of lobbying laws among other lobbying restrictions.

But the only proposal that was approved was one that prohibits lobbyists, political action committees, labor unions, and a person registered as an independent expenditure committee from giving loans to candidates and political committees. What remains to be seen is whether the governor will follow through on a pledge to unilaterally ban those who do not voluntarily follow the code of conduct from lobbying the executive chamber.

Though Cuomo had proposed several procurement reforms in his executive budget proposal, “Nothing got done in statute,” said Camarda. The governor reached a deal to restore the state comptroller’s pre-audit authority over certain state contracts -- powers stripped in Cuomo’s first year as governor -- but did not give it the backing of law in the budget and legislators do not appear to have fought for it to be in statute.

Cuomo had also expressed support for stronger oversight powers for the state inspector general over SUNY- and CUNY-affiliated nonprofits, which were not passed with the budget. SUNY-affiliated contracts were at the center of a major bid-rigging scandal that led to the corruption conviction last year of Alain Kaloyeros, a former top economic development aide to Cuomo, and prominent donors to Cuomo’s campaign.

The budget does appropriate $500,000 to administratively implement a “database of deals,” which is meant to outline projects receiving state economic development benefits. But the appropriation does not detail whether the database would be created in a way that would make it transparent or easily accessible. Advocates have pushed to make it downloadable and machine-readable for easy analysis. “None of the functionality that we would want to see in a database is specified,” Camarda said. “A bigger problem is there are no requirements as to what information should be included and there are no definitions.”

Cuomo did include a specific provision in the budget that expands his authority over the Public Authorities Control Board, a direct response to the undoing of the deal to bring an Amazon campus to Queens. Cuomo has repeatedly blamed the failure of the deal on the state Senate’s nomination of Amazon-opponent Senator Mike Gianaris to the PACB, which would have final approval of a portion of the subsidies offered to the tech giant. The new budget allows Cuomo to remove a member of the PACB who oversteps, or threatens to overstep their authority.