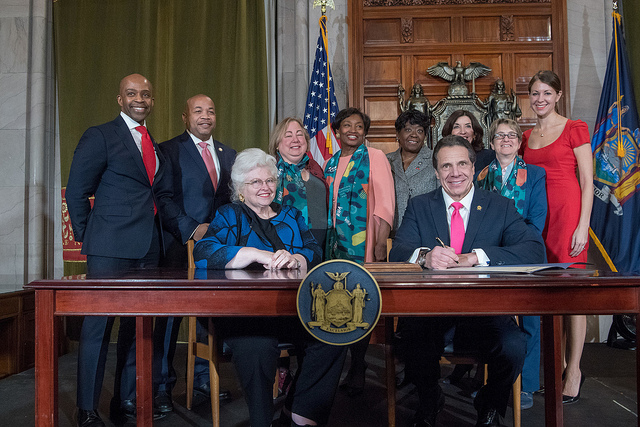 Although the state budget approved earlier this week included several progressive priorities for Governor Andrew Cuomo and the state Legislature, there are still three months left in the legislative session this year and a list of remaining items on which the governor and legislators have promised action.

Taking advantage of their party’s newfound control over both houses of the Legislature, Democrats moved a long list of bills already this year, both prior to and in the budget. Though there has been a level of expected divergence on some bills within the legislative chambers, and a more unexpected degree of infighting between the legislative leaders on one hand and the governor on the other, long-sought Democratic priorities have nonetheless advanced, from voting reforms to women’s reproductive rights to gun control and much more.

In a Sunday news conference outlining the details of the budget agreement that included congestion pricing, criminal justice reform and other new policies, Cuomo also laid out some unfinished business for the days ahead including legalizing the adult use of marijuana.

“We have not legalized cannabis, adult use cannabis. The political desire is there, I believe we will get it done,” Cuomo said. The governor had intended to use much of the estimated $300 million in annual revenue that would be raised from taxing marijuana sales to fund the MTA. But the proposal was pulled in different directions and it became apparent a few weeks before the April 1 budget deadline that a deal on all the intricacies of legalization was unlikely.

On the one hand, more conservative legislators and law enforcement officials raised concerns (some unfounded) about public safety, with several county leaders indicating they planned to opt out of allowing sales, and, on the other, lawmakers of color and criminal justice reformers wanted to see both opportunity and revenue go towards communities most impacted by marijuana enforcement. “It is complicated to come up with a program that does it and protects public safety, and does economic empowerment for communities that have paid the price,” Cuomo said. “And the best way to do it was not in the race of the budget.”

He also spoke of a desire to update the so-called public works bill to ensure workers receive a prevailing wage on construction projects receiving state benefits, and reform the state’s rent regulations, which expire in July. Along with marijuana legalization, rent regulations are expected to be the most controversial issues taken up in the remaining session.

In a Tuesday interview on WNYC’s The Brian Lehrer Show, Cuomo in particular addressed reforming the Major Capital Improvements (MCI) law that allows landlords to substantially increase regulated rents after undertaking significant renovations. It is one of a small handful of rent regulations that legislators plan to strengthen -- others include preferential rents, the so-called vacancy bonus, and vacancy decontrol.

“That’s going to be I think a great reform for tenants and I believe we’ll get more than people have ever gotten before,” Cuomo said of MCI changes, “because it wasn’t just the real estate lobby, but there was a reluctance to deal with the details of how these laws actually work and we now have three months to focus just on these laws because we got so much done in the budget.”

On MCIs, Cuomo indicated what has become a popular Democratic position that even some in real estate see as potentially tenable: that landlords should be able to pass along some of the costs of improvements to tenants, but not necessarily in perpetuity. Some legislators want to abolish the MCI program altogether, though others, as well as real estate representatives, warn that could lead landlords to drastically limit investments in their buildings.

Cuomo also included several other priorities in his executive budget proposal that weren’t included in the adopted budget and could potentially be addressed in the next few months. He floated a proposal to allow municipalities to legalize the use of electronic scooters and bicycles, which criminal justice reform and immigration advocates in New York City are particularly eager to see approved. The city has been cracking down on e-bikes -- which are regularly used by restaurant delivery workers who are often immigrants -- and the City Council has been awaiting authorization from the state to legalize them.

State lawmakers and activists are also pushing a bill that would allow drivers licenses for undocumented immigrants, which would affect more than 700,000 immigrants living in New York. The governor has publicly said he supports it, but Gothamist reported last month that he was working behind the scenes to prevent its passage. The bill's Assembly sponsor, Bronx Assemblymember Marcos Crespo, had urged its inclusion in the budget, tweeting on March 27, "Senate and Assembly Dems should come together and support our immigrant families in This budget cycle." Assembly Speaker Carl Heastie responded to Crespo, saying the chamber would advance the bill after the budget.

The governor has also proposed ending the state’s ban on paid surrogacy and just last week urged lawmakers to act. “It is unconscionable that people need to leave the state to have a child due to New York State's antiquated surrogacy laws,” he said in a statement. But surrogacy was not legalized in the budget.

Though there has been little discussion of legislation favorable to charter schools -- which have stronger allies in the Republican Party but also enjoy support from Cuomo and some Democrats -- there is a possibility that the state could look at expanding the cap on the number of charters in New York City, a threshold that was met for the first time this year.

In the Assembly, Speaker Heastie said Tuesday that his chamber would be “laser focused” on rent regulation, though he did not say whether it would take priority over marijuana legalization. “I don’t wanna say what’s bigger than the other but I think there’s 20-something years worth of history with rent regulations that I think has to be spoken about, talked about and fixed,” he told reporters outside his office, according to audio provided by a spokesperson. “So I’d say it’s going to be a huge, major focus of ours.”

He also said “there’s support within the conference to do universal rent control. In the Assembly we don’t just wanna seem like we care about the tenants in New York City...We want to protect tenants all across the state.”

Two significant proposals that gained little traction, outside of advocacy circles, prior to the budget were the New York Health Act and the Climate and Community Protection Act.

The NYHA, led by Assemblymember Richard Gottfried and Senator Gustavo Rivera, would establish a single-payer health care system in the state. Cuomo has supported the principle, but insists that it should be federally funded rather than putting the state’s finances in jeopardy. It remains to be seen if the bill will gain any momentum in the three remaining months of session. Supporters rallied for it on Tuesday in Albany, trying to establish it as a key priority for the next several weeks. It’s unclear if either Democratic majority in the Legislature has the stomach for pursuing the policy and forcing a broader conversation on what would make for a major overhaul of health care and insurance in the state, as well as the state tax code.

The CCPA is a roadmap to moving the state economy towards entirely renewable energy and creating jobs in the process, akin to a version of the Green New Deal being championed by national progressive Democrats. But Cuomo proposed his own version of “New York's Green New Deal,” which was a somewhat less aggressive alternative proposal that only dealt with the energy sector. Neither moved towards passage before the budget and will likely be a matter of discussion as the post-budget session moves ahead.

One aspect of the budget agreement that left government reform advocates particularly disappointed was the omission of any new anti-corruption measures targeted specifically at the state’s scandal-ridden economic development programs. The budget included funding for a “database of deals” that will purportedly outline projects receiving state assistance, but did not include statutory language about the structure of the database, which will apparently be at the discretion of the Cuomo administration and its Empire State Development.

The governor also agreed to administratively restore the state comptroller’s authority to pre-audit contracts handed out by SUNY and CUNY affiliates, rather than give it legislative power.

Heastie said Tuesday that those two measures could end up in statute, something legislators have been threatening for years. “I think that we did agree that on ethics we wanted to engage in three-way conversation so I think those discussions will happen in the second half as well,” he said, echoing comments he’s made in the past.

In February, the Assembly and Senate held the first joint hearing in decades on workplace sexual harassment, hearing from several women who had experienced harassment when employed by former state lawmakers. The women testified to the inadequate protections against harassment in state law and insisted that the Legislature must work to improve them, as well as the broader culture in Albany.

Both Assembly Speaker Carl Heastie and Senate Majority Leader Andrea Stewart-Cousins have said they support holding additional hearings that could potentially take place in the next few months and set the stage for further legislative action. The former legislative aides, some of whom have formed the Sexual Harassment Working Group, have a set of proposals to strengthen the state’s anti-harassment laws, and there are several legislators who appear ready to work with the advocates to advance those priorities, which would apply to both the public and privates sectors, as did anti-harassment laws passed last year.

Ineffective state response to sexual harassment in part points to the oft-maligned Joint Commission on Public Ethics (JCOPE), which victims have said is incapable of appropriately handling sexual harassment complaints against those in government. JCOPE has also been criticized as lacking independence from the very officials it is supposed to investigate, leading to calls -- and legislation -- to replace the commission with a new body. It’s unclear if there will be any momentum in the coming months to explore that option or a host of other reform bills, some proposed by Cuomo, like extending the Freedom of Information Law to the Legislature.