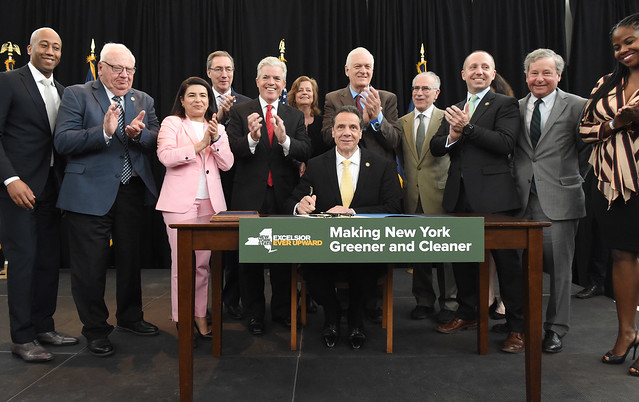 The state Senate, Assembly, and Governor Cuomo have reached an agreement on a version of the Climate and Community Protection Act (CCPA), setting the stage for passage of a bill to significantly reduce New York’s greenhouse gas emissions and transition the state toward a green economy. The bill has previously passed three times in the Democratic-led Assembly, but stalled in the Senate, which was controlled by Republicans for virtually all of the past several decades until this year.

As support for the CCPA mounted in recent weeks, Cuomo had questioned the bill, criticized its supporters as "playing politics" with important policy matters, and explained that key differences on the bill related to timelines and goals around moving to renewable energy, as well as how and where new state environmental funding would be allocated.

Compromise was reached over the weekend as the three parties negotiated a host of issues, and came to a number of agreements, just ahead of the scheduled end of the Albany legislative session on Wednesday.

The agreed-upon bill sets ambitious standards to curtail greenhouse gas emissions, including transitioning to 70 percent renewable energy by 2030 and 85 percent emissions reductions by 2050. Between 35 and 40 percent of the money allocated by the bill’s transition requirements will be invested in communities most vulnerable to climate change. The bill will also create provisions for wage and labor standards for state-supported “green jobs” or those that improve sustainability.

“I believe we have an agreement. I believe it's going to pass,” Governor Andrew Cuomo said on WAMC radio’s The Roundtable on Monday morning. After repeatedly calling the bill both too ambitious and not ambitious enough, and dismissing advocates and elected officials pushing for it as promising too much too quickly because they wanted to score political points, Cuomo indicated at the end of last week that he was hopeful to reach a deal on a climate bill. The governor has also repeatedly cited his own version of a “New York Green New Deal,” with targets for reductions in emissions and transitions to renewables.

“We all knew we had to make some compromise to get a three way agreement, but we’ve done a lot of good stuff in this bill. We’re going to see New York lead the world,” Assemblymember Barbara Lifton said at a Monday press conference hosted by legislators and the broad NY Renews coalition that has been organizing behind the bill. Lifton was an early supporter of the CCPA when it was first passed in 2016.

In recent weeks NY Renews had helped secure majority sponsorship of the CCPA in both houses and rolled out high-profile endorsements of the bill from much of the New York congressional delegation, including both Senators Charles Schumer and Kirsten Gillibrand and Rep. Alexandria Ocasio-Cortez, as well as Vermont Senator Bernie Sanders.

A key area of compromise was reached around the mandated investments in hard-hit and vulnerable communities, areas of the state in need of “environmental justice.”

Cuomo had maintained that his lack of support for the CCPA stemmed from “a question of the distribution of funding.”

Monday’s press conference hosted by NY Renews was celebratory, even if some advocates were slightly disappointed by the compromise and the governor’s claims that legislators backing the CCPA were “playing politics.”

“This is not just a moment for New York but has implications for the world,” climate equity campaign strategist Adrien Salazar said.

Because of its investment in disadvantaged communities, the CCPA is a widely intersectional bill, Senator Jessica Ramos of Queens said at the press conference.

“The CCPA is a huge, history-making piece of legislation, but it can only be the start,” Ramos said.

“While DC sleeps through a crisis, NY steps up,” Long Island Senator Todd Kaminsky tweeted Monday. Kaminsky serves as the chair of the Senate Environmental Conservation Committee and lead sponsor of the bill.

The bill is expected to be voted on in both legislative houses on Wednesday, the final scheduled day of the session.