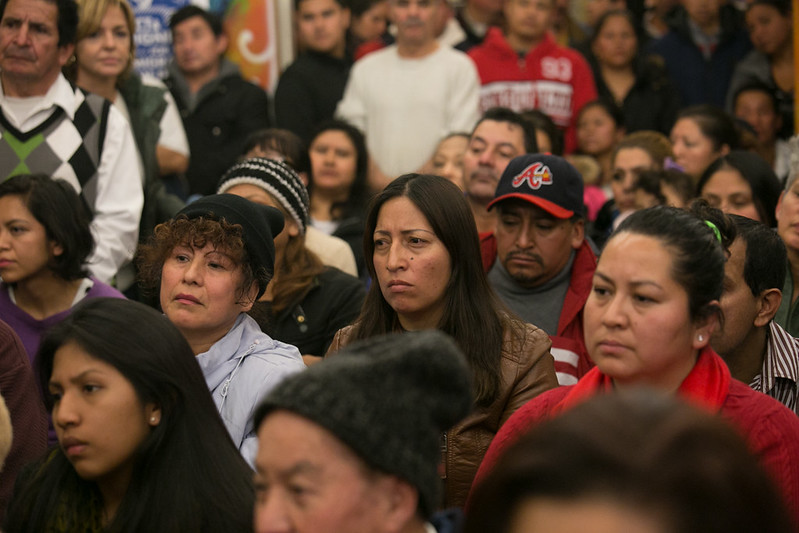 A state commission charged with creating a plan for ensuring a complete count of New York residents in the 2020 Census has finally released its report, nine months after it was due and with continued ambiguity over how state census funding will be distributed.

The New York State Complete Count Commission, made up of executive and legislative branch appointees, spent months holding hearings across the state to solicit input on the challenges posed by the decennial census and how the state should respond. The commission was co-chaired by New York State Secretary of State Rossana Rosado and Jim Malatras, president of the Rockefeller Institute of Government and a former top aide to Governor Andrew Cuomo.

This year’s state budget included $20 million for census efforts and the commission’s report, approved in a unanimous vote on Tuesday morning, is meant to be a roadmap for allocating that funding and avoiding an undercount, which could lead to less federal funding for the state, a loss of possibly two seats in the House of Representatives, and a whole host of other ancillary effects over the course of a decade.

Many of the concerns the report outlines were already apparent to advocates and observers: That New York is home to potentially 4.8 million hard-to-count individuals (particularly children under the age of 5) and that several communities lack language access, that the new online methodology could lead to lower responses among seniors or those lacking computer literacy, that the Census Bureau is having trouble recruiting workers and that communities of color and immigrants are particularly wary of the process, owing in no small part to the Trump administration’s unsuccessful efforts to add a citizenship question.

That question threat, in particular, has “created a lot of controversy, and had a potential chilling effect and created consternation in many of our communities, especially our foreign-born communities,” said Malatras, at Tuesday’s meeting where commissioners video-conferenced in from across the state. “Besides California, New York State has the highest percentage of foreign-born communities and people in the nation. So, in particular, it hits our state hard.”

The report also noted worries about data protection because of the digital-focused questionnaire, and omissions of home addresses from the Census Bureau’s records.

The challenges are by no means small. There are more than 200 languages spoken across the state but the Census Bureau will only provide video and printed guides in 59 languages and will translate the online questionnaire into only 12 other languages besides English. As many as 113,000 New Yorkers will have no language support from the Census Bureau, the report notes.

About 13.5% of households across the state also lack access to the internet at home, which could depress their self-response rate. The federal government has also yet to provide a waiver to the New York Census office to hire non-citizens as enumerators, who go door-to-door surveying residents in communities where the self-response rate is low. Advocates and officials agree that in immigrant-heavy communities, non-citizens are often the most effective at gaining people’s trust and soliciting responses.

Failing to meet these challenges could mean that New York State could see a drop in self-response rates to 58%, down from 62% in 2010 when the national average was 76%, according to Census Bureau estimates.

The report lays out several recommendations for a strategy the state should follow. It includes an analysis of hard-to-count census tracts, identifying where the state should expend its resources. The commission recommends a targeted communications campaign for communities at risk of an undercount and additional support for areas that lack internet connectivity and populations that rank low on digital literacy.

It also pushes for expanded translation services and building trust with immigrant communities. The report notes that if federal immigration authorities seek to misuse Census data, the state’s Liberty Defense Project should be pressed into action to provide legal assistance to immigrants.

Acknowledging that certain sections of the population fly under the radar, the report specifically urges the state to ensure an accurate count of people experiencing homelessness. It also pushes for ensuring that individuals in group-living situations – students in dormitories, seniors in nursing homes, inmates in correctional facilities – are counted.

The commission laid out a detailed plan for how the state can support municipalities with their efforts to conduct census outreach including providing aid to local complete count committees, collaborating with “trusted voices” like nonprofit service providers, labor, and faith-based organizations, enlisting all state agencies in the census effort, collaborating with the philanthropic community and establishing Census Assistance Centers in hard-to-count census tracts.

“We are reviewing the report and the insight it provides on how the State, local governments and our partners can work together so that every New Yorker is counted in the 2020 Census,” said Freeman Klopott, a spokesperson for the state Division of the Budget, in an email.

At the hearing, Malatras acknowledged that the commission’s work had been delayed – it was only appointed after its first report was already due. “What we have to do today is we get this report to the state so they can release those resources that they provided in the budget,” he said. The commission is also meant to release a second and final report in January that details progress on its recommendations, he pointed out.

Commissioner Henry Garrido, executive director of labor union DC37 (who was appointed when Commissioner Hector Figueroa of 32BJ SEIU unexpectedly passed away -- the report includes a dedication to Figueroa) raised concerns about mistrust in immigrant communities and the question of hiring non-immigrants. Though Malatras admitted that “there was no clarity” on the use of the federal waiver, he urged local authorities to move ahead either way. “So we're going to go forward as if it would be okay to hire,” he said.

Commissioner Jose Calderón, president of the Hispanic Federation, raised the issue of the release of state funds. “We are already really late in the game,” he pointed out, wondering about the process and timeline on which the money would be awarded to community-based organizations. “It is those trusted sources that are going to help us deliver on the promise of getting a complete count in New York State,” he said.

Calderón’s worries were echoed by other commissioners including Esmeralda Simmons, founder and executive director of the Center for Law and Social Justice at Medgar Evers College, CUNY. “It's a roadmap,” she said of the report, “but unfortunately, it doesn't get us to our destination.”

She said CBOs have been waiting for months for funding to assist their work and the report provides few details on that front. “Everyone's waiting for recommendations on how the money is going to be spent, and how it's going to be utilized,” she said. “And we all know state government is not usually that swift. I appreciate all the actions that are anticipated but we have said none of that in this report. We've talked about no plan on how to get the money out there.”

Malatras sought to downplay those concerns, insisting that the next report due in January will address any funding issues and that it wasn’t within the commission’s authority to dictate whether the state dole out funding through a competitive bidding process or through agencies. “We want to make sure there's maximum flexibility for the state Legislature, the executive and others to say this is how they want to do it,” he said.

Simmons later pushed a motion to send a message of urgency in writing that the $20 million in census funding “be appropriated by the most efficient and expeditious method using state entities.” The motion was unanimously approved.

[Read: As City Rolls Out Census Funding for Outreach Efforts, State Lags Behind]