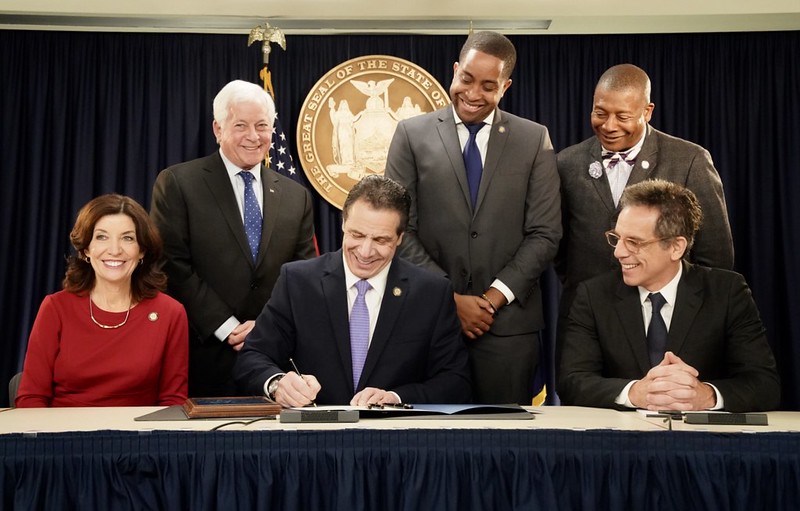 In the final weeks of 2019, Governor Andrew Cuomo quietly signed a bill changing the way affidavit ballots are counted, an issue that roiled New York City last summer during the controversial recount in the Queens District Attorney Democractic primary. Borough President Melinda Katz, who had Cuomo’s endorsement, eventually prevailed over public defender Tiffany Cabán by just 60 votes, with hundreds of potential votes not counted -- votes that may have been counted had the governor signed the affidavit ballot bill into law then.

The bill, sponsored by Assembly Member Kevin Cahill and State Senator Leroy Comrie, would allow election administrators to count affidavit ballots when they “substantially comply” with the requirements for filling them out. The law is intended to make it harder to throw out the provisional ballots when the intent of a voter is clear, even if they contain minor errors -- a death sentence for many of the roughly 350 uncounted affidavits in the incredibly close Queens District Attorney primary.

The legislation passed both chambers of the State Legislature in June but went unsigned by the governor until December 20, just ahead of the year-end deadline for taking action. The law takes effect immediately, in time for the March special election to replace Katz, who was sworn in as the borough’s top prosecutor at the beginning of this year.

“When a person clearly evinces their intention on the ballot and they are verifiably qualified to vote, nothing should stand in the way of counting their choices,” Cahill, an Ulster County Democrat, wrote in an email to Gotham Gazette. “Over the last several years, the courts of our state have been inching toward that simple concept and now it is the law of our land.”

Affidavit ballots are provisionally provided to voters who believe they are registered but are not listed in the voter rolls when they show up at a poll site, which could result from a number of factors like when a voter has recently changed addresses. If a local board of elections determines the voter to be legitimately registered, the ballot will be counted.

Among the most common errors during the Queens DA primary were incomplete information on the envelope containing the ballot, including flaws like a voter failing to list an address where they were previously registered.

The new law loosens the criteria for counting a ballot by emphasizing the voter’s intent and explicitly removing failure to list a previous address from the list of disqualifying factors.

Good government groups are pleased the bill has finally been signed.

“We think all votes should be counted, and missing information on an affidavit form should not be disqualifying when a voter's identity and eligibility to cast a ballot can otherwise be determined,” said Alex Camarda, senior policy advisor at Reinvent Albany, a government watchdog.

During the contentious recount in the close race between Katz and Cabán, many people wanted to see the bill signed to allow more affidavits to be counted, while others were concerned about changing the laws under which voters and election administrators were operating in the middle of an election. Between the conclusion of the recount and Cuomo signing the bill last month, a general election passed with little controversy around affidavit ballots.

“There were more than 900 bills that passed both houses at the end of the 2019 session and had to be reviewed by the Counsel’s Office and the Division of the Budget. It is our responsibility to ensure that the bills, as written, are responsible, enforceable and accomplish their intended purpose,” wrote Caitlin Girouard, a spokesperson for Cuomo, in an email.

The governor’s approval memo, accompanying the legislation, states that before giving his signature he had to secure an agreement with the Legislature to clarify the meaning of “substantially comply” in order to ensure ballots “are not unjustly cast aside.”

During the Queens DA recount in July, Cuomo said, “it’s absurd to say you would apply anything retroactively,” according to a tweet by reporter Emma Whitford, apparently referring to changing the canvassing rules after ballots had been cast. “So it’s really about the [November] election now,” he added when asked about signing the bill, which he did not sign until after that election.

Other Voting and Election Reforms Signed, Take Effect
Cuomo’s signature on the affidavit bill came days after he signed two other voting measures related to absentee voting. The new provisions require absentee ballots to align with the ballots used by voters in-district on election day and for absentee applications for school district elections to be simplified in line with other absentee applications already in use.

Earlier in December, the governor signed legislation passed in June that requires SUNY and CUNY to offer voter registration forms and absentee ballots to students each September and in January of presidential election years.

The affidavit and absentee ballot legislation are among a slew of election reforms passed in 2019 by the State Legislature, newly under Democratic control of both houses. The changes, some of which have already gone into effect and others of which are just being implemented now, include several that election reformers had long sought to make voting easier.

Establishing a statewide nine-day early voting period and authorizing local elections boards to use electronic poll books were in effect for the first time ahead of the November general election. Lawmakers also unified federal and local primaries in June, in an effort to consolidate the many elections New Yorkers may participate in every other year. This year is set to see three statewide election days (presidential primary in April, congressional and state legislative primaries in June, general election in November), but not the four that occurred in 2016.

The reforms also included a change in the party enrollment deadline to within five months of the June primary and having voter registration automatically transfer when moving residences within the state.

Beginning January 1, 16- and 17-year-olds are now allowed to pre-register to vote if they are otherwise eligible, with the registration going into effect when they reach voting age. In October, Cuomo signed the Voter Friendly Ballot Act, which changes the way ballots are designed to improve readability.

In January 2019, the Legislature also secured the first passage of two state constitutional amendments that, if ratified, will allow New Yorkers to register to vote on election day (same-day registration) and apply for absentee ballots without providing a reason for needing one. State constitutional amendments must pass in two consecutive legislatures and be approved by voters in a ballot referendum, so the earliest these would become law is late 2021, if they are passed by the 2021 Legislature followed by voters that fall.