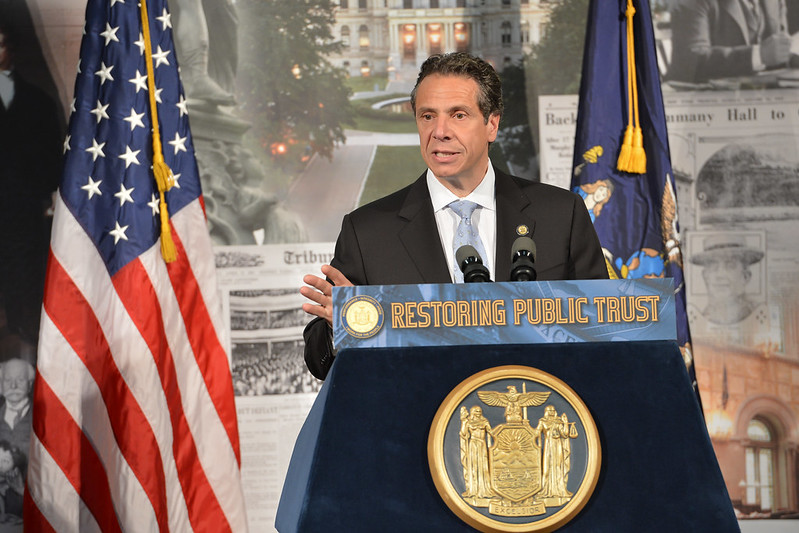 The government ethics agenda put forth by Governor Andrew Cuomo in his 2020 State of the State is much shorter than those he’s proposed in years passed.

In fact, it contains just one proposal: legislation mandating some state officials publish their tax returns. Meanwhile, it leaves out several of Cuomo’s past proposals that have yet to be accomplished, including major campaign finance reforms supported by one of his top allies.

The heavily-truncated list comes after more than a year of controversy surrounding the state’s Campaign Finance Reform Commission, which was created by the governor and Legislature to tackle some of his oldest evergreen proposals to get money out of politics. That commission put forth binding recommendations, now law, to institute a new public matching campaign finance system, with much lower individual contribution limits and other reforms.

But following the end of the commission’s work, many observers and one of Cuomo’s own appointees to the body, have said that a number of key campaign finance reforms are yet to be resolved and should be taken up by state lawmakers.

Yet in his most recent State of the State address, and the 318-page policy book that accompanied it, Cuomo outlined just one initiative that would address potential government corruption. The sole item related to ethics or campaign finance is passing the “Nothing to Hide” Act, a bill that would require the state’s most powerful and highly-paid officials to disclose their tax returns to the public. It is a proposal that resonates with national calls for President Donald Trump to release his tax returns, but touches only one edge of the state’s most endemic corruption problems.

Left aside by the campaign finance commission, and also by Cuomo, are proposals to limit donations to party committees and from people doing business with the state, two areas of the campaign finance system that the governor has said enables dark money in the political process.

After years of Cuomo calling for reforms to address perennial corruption and the influence of big money on state government -- strengthening financial disclosure requirements for government officials, expanding state procurement oversight, limiting the income of legislators outside their government salaries, to name a few -- only some of the most highly anticipated proposals have been accomplished, with others only partially or nominally addressed, and a number completely unfulfilled.

Paring down his ethics agenda comes after repeated pledges to clean up state government since his winning 2010 campaign for governor and amid a long series of corruption scandals, including those involving members of Cuomo’s inner circle and state legislative leaders; and amid the governor’s ongoing practice of raising huge sums of money from powerful entities with state business.

“We would have liked to see the governor propose more good government legislation in his State of the State address. In years past he put forth many proposals and this year it appears there’s only one,” said Alex Camarda, senior policy analyst at the good government group Reinvent Albany.

Campaign Finance
High on the list of accomplished reforms are the recent Campaign Finance Reform Commission results, including establishing a voluntary system with lower contribution limits for individuals and public matching funds to multiply the impact of smaller donations. While the details of the new system are still being debated, litigated, and widely critiqued (though not negotiated by state lawmakers), the commissioners left untouched two long-sought changes: contribution limits on donors to political party accounts and on people doing business with the state.

Ethics watchdogs have identified both issues as avenues for circumventing the state’s existing campaign contribution limits and promoting the influence of large political donors. And Cuomo has over the years called for restrictions on both fronts, though he included neither in his 2020 agenda.

Cuomo’s chosen chair of the state Democratic Party, Jay Jacobs, was also one of the governor’s appointees to the campaign finance commission, and while the commission didn’t touch political party donation or doing-business donation limits, Jacobs said that lawmakers should tackle both.

Asked in December why the commission hadn’t, Jacobs said on the Max and Murphy podcast that the panel’s legal counsel believed them to be outside the commission’s jurisdiction. “That’s not to say that I don’t believe, and I do believe, that the legislature should take it up and address both those issues,” he said, adding there should be limits on “party accounts and certainly those doing business with the state.”

Cuomo has for almost his entire term in the executive chamber called for limits to party “housekeeping” accounts, including it in his first State of the State in 2011, and in every other policy book between 2013 and 2018. Housekeeping accounts, as opposed to party committees, are meant to support party activities outside of campaigns, but are frequently used to channel large contributions into elections operations like get out the vote efforts, which can be used to benefit preferred candidates outside of the state’s oversight apparatus.

The governor has also publicly supported campaign contribution limits on people with or seeking state contracts throughout his tenure, at least as far back as his 2012 State of the State. In his speech that year, he raised alarms about the “undue influence over elected officials” of contractors and lobbyists who have donated to the campaigns of key decision-makers and may later expect the favor to be returned. (In 2016, as the Buffalo Billion bid-rigging and bribery scandal was unfolding, Cuomo pledged to restrict contributions to his own campaign coffers from companies when the government was seeking contractors. His office later confirmed to Gotham Gazette that this promise had not been followed through on.)

Cuomo has benefited immensely from contributions from people and businesses with state contracts. The New York Times reported in July that Cuomo had raised over $3 million just from contractors with the Metropolitan Transportation Authority (MTA) since he took office in 2011, according to campaign finance filings. That is more than 3 percent of his total campaign donations over the same period of time coming from contractors with just one, albeit massive, state authority.

Jacobs admitted in the interview that restricting contributions to party accounts goes against the interests of the state party he chairs, of which Cuomo is one of the biggest beneficiaries. “As state party chair I would advocate maybe something different but that’s not my role at this moment,” he said.

Party committees are able to garner a virtually unlimited amount of money and unlike housekeeping accounts can be used on electoral spending to benefit a particular candidate. Campaign finance filings for the weeks ahead of the 2018 primary, in which a number of incumbent Democratic legislators had competitive challenges from the left, show the New York State Democratic Committee received hundreds of thousands of dollars from a handful of unions and political action committees -- the largest donation that filing was $109,000 from the United Federation of Teachers (UFT). Ahead of the general election in 2019, the committee received a single donation of $95,000 from an individual, Lucy R. Waletzky (a Rockefeller), of Pleasantville.

Also left on the cutting room floor was Cuomo’s 2019 proposal to ban all campaign donations from corporations, which accompanied a similar plan to ban contributions by limited liability corporations, or LLCs.

“That’s something that could be done, that could go further than what’s been proposed, but I will say that I think the other items I mentioned -- the doing business restrictions, lower contribution limits, limits on party and housekeeping accounts -- are more important,” Camarda said, noting that LLCs were partially addressed last year when the Legislature and Cuomo imposed contribution limits and new disclosure requirements on them.

Asked why Cuomo had not included some of his past ethics and campaign finance proposals in his 2020 agenda, and specifically why he did not include limits on political party and doing-business contributions, a spokesperson for Cuomo said he still supports past proposals.

"We're proud to say that closing the LLC loophole was among the first bills the governor signed last year and of course we continue to support these further reforms. I'm sure these will be among the issues we’ll be discussing with the legislature this session," wrote Caitlin Girouard, the administration spokesperson, in an email.

What remains in 2020 is the proposed tax return disclosure requirement, which would make high-earning officials, including the governor, attorney general, comptroller, state legislators, and agency commissioners, as well as any elected official earning more than $100,000 annually, to publish their tax returns. The measure is similar to a 2019 proposal in Cuomo’s State of the State that would require candidates for statewide office and the Legislature to submit tax returns to the Board of Elections.

“We think the public financing system still needs to be improved significantly by limiting party contributions, contributions from individuals doing business with the state, for example,” Camarda said.

“And we think there is a real need to reform JCOPE and ethics laws, which nobody believes are working effectively, as evidenced by all the situations that have arisen over the last year,” he added referring to the state’s maligned ethics watchdog.

More Past Cuomo Ethics Proposals
A number of other ethics proposals from previous years remain active in the minds of good government advocates, if no longer in the governor’s. Among them are requiring local elected officials and municipal employees to file financial disclosure statements with JCOPE. Another initiative would have enacted a “first-in-the-nation” code of conduct for lobbyists, as Cuomo put it last year, a measure that several good government groups opposed saying it was too nebulous.

Other past priorities of the governor were pursued in previous years but failed to achieve the full scope of what was advocated. High on that list was a limit on legislators’ income outside their government salary, which was imposed by a commission but later struck down in New York State Supreme Court. Good government groups now want to see the measure, which is intended to limit conflicts of interest and opportunities for corruption, created through statute by the Legislature and governor.

At the start of 2019, Cuomo was calling for expanded oversight powers of the state comptroller and inspector general to review certain large state contracts for SUNY, CUNY, and affiliated organizations, as well as Office of General Services centralized contracts. This was partially achieved through an agreement between Cuomo and Comptroller Thomas DiNapoli in August, but good government groups want to see it codified.

In his 2019 State of the State, and clarified in his executive budget proposals that year, Cuomo called for multiple changes to the state’s Freedom of Information Law, from making the state Legislature subject to open records provisions and allowing public access to union contracts before they’re approved to limiting the length of time during which trade secrets are exempt from FOIL. None of his five proposals passed, but three other legislative amendments were made: exempting mugshots from FOIL, requiring Industrial Development Agencies to livestream and record public meetings, and requiring state agencies with websites to create a webpage for requesting records. In December, Cuomo signed a FOIL bill and vetoed another, both relating to access to court records (the vetoed measure would have limited certain law enforcement-related exemptions to FOIL).

Note: this story has been updated to reflect that Comptroller DiNapoli's office said the aforementioned agreement with Gov. Cuomo has been finalized, so mention of it not being so has been removed.