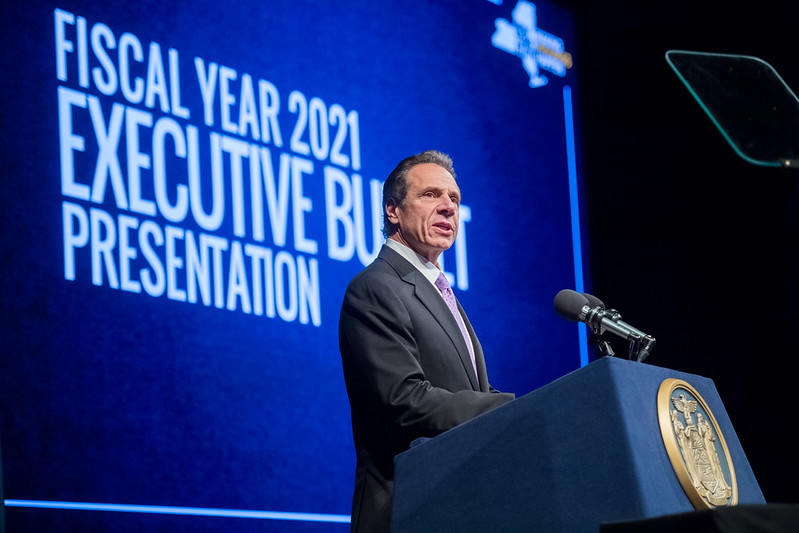 Governor Andrew Cuomo released his 2021 executive budget proposal in Albany on Tuesday, presenting an $178 billion spending plan for the next fiscal year, including $105.8 billion in state operational spending, a 1.9% increase over the current year, according to the governor’s budget documents.

The governor proposed significant reforms to quickly-increasing state Medicaid spending and a radical rethinking of education aid to localities, the two largest parts of the budget that he’s forecasting will nonetheless grow at 3% each this year.

Cuomo’s budget plan closes a daunting $6.1 billion projected budget gap through several broad measures: a still-vague plan to slice projected Medicaid spending by billions, a far lower increase in education aid than is sought by many officials and advocates, and holding other state operational spending growth to typically low levels. But it still accounts for ongoing and increased spending for a wide variety of the governor’s priorities, from economic development to infrastructure, housing and homelessness to child care.

The governor promoted tax cuts for the middle class that are continuing to go into effect and proposed a new tax cut for small businesses. And he spoke of his top line priorities including legalization of adult use of marijuana and gestational surrogacy, passing the Equal Rights Amendment, and reforming the state’s bail reform laws, among other items.

“All of this done, there's no gimmicks, there's no new casino revenue, there's no major fee increase, there are no new revenues,” he said. “This is not the time to come up with creative, although irresponsible, revenue sources to solve a problem which doesn't really exist.” Though there are indeed no new fee increases, the governor’s budget proposes extending fees on oil and gas wells and other facilities, which was due to expire March 31, though the 2024 fiscal year. He also proposed imposing a Certificate of Need fee on hospital construction projects, projected to bring in $70 million, and creating a new Motion Picture Theater alcohol permit. Altogether, Cuomo’s budget document shows a net $51 million increase in revenue from those and other actions.

“You can be a progressive and you can be fiscally sound, and that's exactly what this budget does,” Cuomo said. His proposal sets the stage for negotiations with the Legislature over the next few months. Both the State Senate and Assembly will release their own one-house budget resolutions that detail each chamber’s budget and policy priorities. The three sides have just over two months to come to an agreement before the April 1 start of the 2021 fiscal year.

The governor has delivered nine budgets that have been on time or close to it since he has been in office, a marked sea change from the period before his tenure. But this year presented him with the second-largest budget gap he has ever faced, after his first year when he closed a whopping $10 billion hole through major cuts to school aid and a redesign of the state Medicaid program.

In total, Cuomo is projecting Medicaid spending to grow to about $20 billion in the 2021 fiscal year, up from $19.4 billion this year, a 3% increase. Education aid is also expected to increase at the same rate, to $28.5 billion, an increase of $826 million, far below the state Board of Regent’s request of $2 billion. Executive agencies are expected to increase spending by only $100 million.

The $6.1 billion projected hole for next fiscal year, which Cuomo alternately raised alarms about and downplayed as very manageable, owed largely to an uptick in Medicaid costs, prompting the governor to reinstitute the Medicaid Redesign Team that he formed in 2011.

Cuomo announced Tuesday that he is tasking the “MRT II” with finding $2.5 billion in savings, and imposed several mandates that would, he said, protect localities from adverse impacts while making them more responsible for Medicaid spending. Under his proposal, localities will have to absorb any cost increases beyond 3% annual growth and those that fall below that threshold would receive 25% of the “savings.”

Another $2 billion to fill the budget gap came from higher-than-expected tax receipts, while the budget also reduces projected spending on assistance to localities by $1.78 billion. Agency operations saw a $359 million reduction in spending from the original forecast and $252 million came from other savings and spending revisions.

“The Executive budget tackles some tough issues but we need to more closely examine the specifics and the broader impact of these proposals,” said State Comptroller Thomas DiNapoli, in a statement, citing the challenge in finding Medicaid savings. “The best way to get the state back on solid financial footing is with recurring actions and higher reserves that will better position the state for when the economic downturn in the cycle arrives.”

Bemoaning the disparities in education spending between the richest and poorest schools, which spend $36,000 and $13,000 on average, respectively, per pupil, according to Cuomo, the governor proposed scrapping the current Foundation Aid formula that determines how a lot of school aid is distributed. Instead, he proposed sending about 85% of the $826 million increase in foundation aid to the poorest schools across the state.

“The current formula is designed to achieve political needs, not equity,” he said, insisting that the formula is not progressive and must be recrafted. The exact details of Cuomo’s long-term restructuring of education aid are yet to be seen, but the assertions for both this year and beyond could set up one of the most significant areas of debate between the governor and legislators.

Cuomo is also proposing a $257 million increase, about 3.4%, in higher education aid, while calling for an expansion of his Excelsior Scholarship program to provide tuition-free public college to middle-class students.

New York State GOP Chair Nick Langworthy had harsh words for the governor’s budget proposal. “Andrew Cuomo has run New York’s budget into the red to the tune of at least $6 billion, but all we heard from him was dishonest rhetoric, obfuscation, and his fuzzy Albany math,” he said in a statement, calling the governor’s time in office a “colossal economic failure.”

There were progressive critiques of the governor as well, including from Sochie Nnaemeka, state director of the New York Working Families Party, who noted that the governor does not support increasing taxes on the wealthy to fund housing, education and healthcare. “With this budget, Governor Cuomo has again shown that he cares more about the bank accounts of the wealthiest New Yorkers than the basic well-being of working New Yorkers,” she said in a statement.

In his speech, Cuomo largely reiterated many proposals he advanced in his State of the State speech earlier this month, many of which call for major investments in the state’s capital program that funds long-term infrastructure projects, as well as continuing investments in programs that are already underway. Notably, though he spoke of legalizing adult use of marijuana, he did not address the revenue implications of doing so. "Legalize adult use cannabis," Cuomo said. "I believe it is best done in the budget. I said that last year. I believe the budget is the opportunity, frankly, to make some tough decisions and work through tough issues. That without the budget, can often languish, and I suggest that we get it done in the budget."

After not mentioning changing the bail reform laws passed last year, which have become the source of significant debate and controversy, during his State of the State speech, Cuomo briefly addressed the high-profile issue in his budget presentation. "Bail laws," Cuomo said. "Reform is an ongoing process, it's not that you reform a system once and then you walk away. You make a change in the system. It has consequences and you have to understand those consequences. We need to respond to the facts but not the politics. And we need to act on information and not hyperbole. Let's understand the facts, understand the consequences discuss it intelligently, rationally and in a soluble way and then let's make the decisions that we need to make, and we will do that as we move forward over these coming weeks."

While Senate Majority Leader Andrea Stewart-Cousins has indicated a similar openness to altering bail reform, Assembly Speaker Carl Heastie has said the law, which only went into effect January 1 of this year, needs more time to be implemented and that he has no appetite to revisit the changes at this time.

Cuomo yet again brought up protections for gig economy workers, and his budget proposal includes a bill to establish a Digital Marketplace Worker Classification Task Force that would provide recommendations on how to approach new regulations related to "wages, classification, employment criteria, safety and health regulations, collective bargaining, and anti-discrimination protections for on-demand workers." The nine member task force of mostly gubernatorial appointees would have to submit its proposals by May 1.

Cuomo proposed a $10 million increase in funding for outreach efforts for the 2020 Census, building on a $20 million allocation last year and an announcement that another $40 million in state resources would be redirected towards the undertaking.

He cited a $33 billion five-year plan to tackle climate change, including a $3 billion Restore Mother Nature Bond Act that he wants to put before voters this fall, with another $740 million in additional state funding. About $28 billion is set aside for renewable energy projects while $1.5 billion is pegged for carbon-free transportation alternatives. It is not immediately clear how much of this or other monies Cuomo discussed is cumulative including prior allocations or new only to the next budget.

Cuomo added another $25 billion for state infrastructure projects, bringing his regularly-updated long-term plan to $275 billion overall. He allocated another annual commitment of $750 million to the Regional Economic Development Councils, which he credits for decreasing the upstate unemployment rate, but critics have questioned for their effectiveness and efficiency in creating either short-term jobs or long-term economic sustainability in distressed areas of the state.

Cuomo also proposed a $133 million allocation, which he called “the most funding ever to provide supportive housing and services primarily to the mentally ill.” That includes $128 million for the Homeless Housing Assistance Program (up from $64 million currently) and $5 million to house homeless veterans.

To combat child poverty, the governor proposed expanding the Empire State Child Tax Credit at a cost of $157 million in 2021. That expansion would provide an average of $400 to about 400,000 working families with children under the age of four, he said.

The governor also spoke of a spate of proposals that will not have a budget impact but that he has made his top priorities in the legislative session including new gun control measures, a ban on flavored vaping products, legalizing e-scooters and e-bikes, and passing a new domestic terrorism law that is one piece of his response to an increase in hate crimes.

Note - this article has been updated with details about the governor's proposal regarding gig economy legislation.