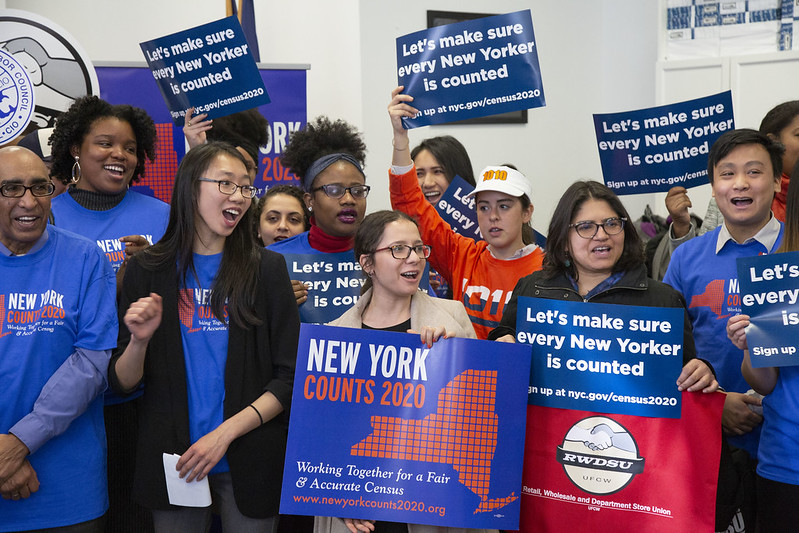 The House of Representatives Oversight and Reform Committee has received and released the list of the U.S. Census Bureau’s community partners for the 2020 Census, including hundreds of entities in New York. The once-a-decade count of the entire country’s population, mandated by the Constitution, has already begun in Alaska and is due to start in the rest of the country on April 1, with initial mailings going out next week.

According to the Census Bureau, the list includes partner organizations that have “made voluntary commitments to conduct 2020 Census promotional outreach as part of the Community Partnership and Engagement Program and have indicated their willingness to be public.”  The Census Bureau provides more information on community partners on its website including how to get involved.

The Census, which goes a long way to determining congressional representation and federal funding for states and localities, is being taken particularly seriously this time around by New York City officials, while the state is also making significant efforts to ensure a full count. Both levels of government are making millions of dollars available to community-based organizations to help drive census participation. Some of those same organizations, and many others, are on the U.S. Census Bureau’s community partners list.

Last month, the House Oversight and Reform Committee, which is chaired by New York City Rep. Carolyn Maloney, held a hearing to examine preparedness for the 2020 Census with the U.S. Census Bureau Director, Dr. Stephen Dillingham, among others. The hearing focused on the Government Accountability Office report that raised concerns about the Bureau’s preparedness.

One concern was the number of partnerships that the Census Bureau had successfully made in local communities, with the GAO report warning that the Bureau had “missed interim goals building towards its overall goal of 300,000 community partners by March 2020.”

Partnerships are key to creating relationships in communities that can help increase participation in the Census. According to the U.S. 2020 Census website, partners are “vital to ensuring a complete and accurate count. As trusted voices in your communities, you play a key role in raising awareness that the 2020 Census is easy, safe, and important.”

The Bronx, Brooklyn, and Queens especially have many census tracts, a small geographic area designated by the Census Bureau to gather data, that are considered “hard to count” for the Census based on past self-response participation levels. According to the interactive Hard to Count Map developed by CUNY Graduate Center using Census Bureau data, tracts are considered hard-to-count if they had a 2010 self-response initial mail return rate of 73% or less, making them among the bottom 20% of return rates nationwide.

In the 2010 Census, New Yorkers were undercounted. Brooklyn, also known as King’s County, was the hardest to count county in New York State that census, and the Bronx was the third hardest county in the state to count, according to the Brooklyn Community Foundation and BronxTalk, respectively.

Accordingly, 80% of Brooklyn residents live in hard-to-count neighborhoods, which often consist of many immigrants, African-Americans, children under 5, and other groups often undercounted, in part because of historically low self-response rates to initial Census mailings.

Appearing on BronxTalk to discuss challenges to census participation in that borough, Dr. Lessie Branch, associate professor at the Metropolitan College of New York, said much of why the Bronx is undercounted is a lack of trust. This lack of trust is what the U.S. Census Bureau is trying to remedy through these community partnerships, and what the city and state are trying to overcome through grants to local organizations.

“This is what partnerships do, they are trusted voices in the community that can tell the community we need to participate, that it’s good for us, good for the community, and our data will be protected,” said J. Christopher Mihm, managing director, strategic issues at the GAO, during the congressional oversight hearing last month. “That’s not something that can come out of Washington, that has to come from trusted local voices. That’s the importance of local partnerships.”

A full census count is essential for states and localities to receive proper funding for social services and other programming, including affordable housing grants, food stamps, and much more.

The partners in every borough span many sectors and industries. In the Bronx, they include cultural institutions such as the Bronx Museum of the Arts and the New York Botanical Gardens, as well as many local police precincts, public and private schools, senior daycares, advocacy organizations including the Williamsbridge NAACP, and private companies including Planet Fitness.

Most of the Bronx has been designated as a “very high risk” for undercounting young children, according to CUNY’s Hard To Count Map, which is being used across the country. Partnerships can play a role in addressing these risks by utilizing organizations that target certain important at-risk demographics. For young children, who are often undercounted, the partnerships with public schools, the Bronx Children’s Museum, or Concord Head Start/Early Learn Center can play a key role, for example.

In Brooklyn, some of the partners include religious institutions such as the Redemption Church and the Sheepshead Bay Muslim Center, nonprofit organizations including the Research Foundation of CUNY, and senior centers.

Some examples of partners in Manhattan include the Kennedy Center, a number of Manhattan Community Boards, the Interfaith Center of New York, and the Family Health Center of Harlem.

Amboy Pharmacy, BP Gas Station, Cafe Milano, NYCHA, and PS 41 are examples of some of the partners on Staten Island, while Queens has partners including Little Friends Infant and Toddler Care, Liberty Tax Service, and many others.

Official partners can participate in the Census in different ways. The Census 2020 website breaks partnership opportunities down into three main categories: “make a plan,” “strategize,” and “attend an event.” The “make a plan” section provides key dates and information regarding the Census so partner organizations can plan their outreach based on when information is most crucial.

The “strategize” section provides partners with the Response Outreach Area Mapper (ROAM) application, which was developed to help locate hard-to-survey areas. From this, partners can begin outreach in their own communities, armed with more information about where they could best focus their efforts.

Finally, the “attend an event” section encourages partners to host a community event, and promotes other community events going on across the country.

The website also provides outreach materials including the Census 2020 logo and marketing materials for community members to apply to be census workers. Census 2020 does not give specific outreach ideas, but provides the resources for every community partner to do their own individualized outreach.

“The 2020 Census is underway right now in Alaska, and will start in the rest of the country in a few weeks,” members of the House Oversight and Reform Committee said in a statement announcing the release of the partners list by the Census Bureau. “The Government Accountability Office recently released a troubling report highlighting the Census Bureau’s insufficient progress in working with partners who are critical in educating the public—especially minority, immigrant, and rural communities.  We hope that sharing this list of community partners with our fellow Members of Congress will help ensure a fair, accurate, and complete count across all districts.”