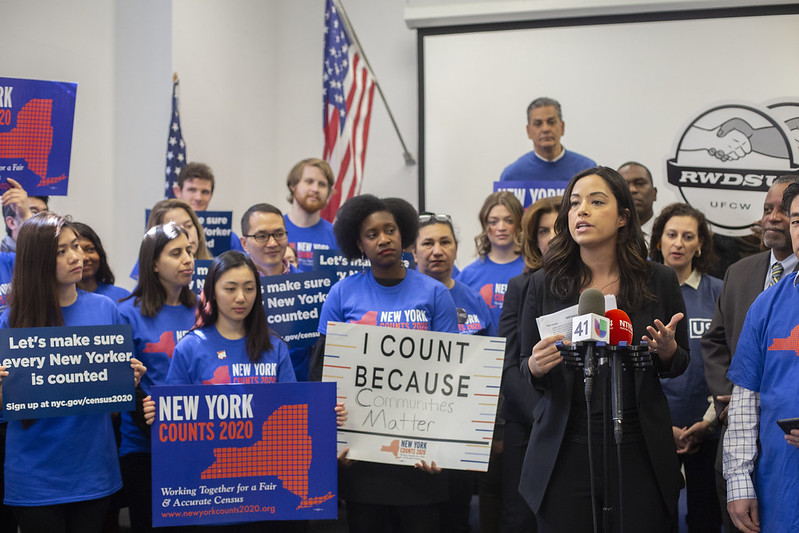 It’s officially “Census Day” -- April 1 -- and though the decennial population count began two weeks ago, by now virtually all households across the United States should have received some form of notification from the U.S. Census Bureau informing them of the ways they can fill out the demographic questionnaire. Census Day itself is more of a marker, not a deadline, to rally people to fill out the questionnaire and the date at which households should count their members.

But as 2020 Census Day is recognized, the process this year has been marred by the coronavirus outbreak, forcing city, state, and federal officials to course-correct to ensure that each and every resident of the country is counted.

The Census determines levels of federal funding that states receive for all manner of programs, from nutrition assistance for low-income families and children’s health care to education, transportation, infrastructure, and more. It also determines how many seats each state gets in the the U.S. House of Representatives, and forms the basis for drawing electoral districts for municipalities, state legislatures, and the House.

After a very poor showing on self-response rates and a likely undercount of the city’s and state’s populations in 2010, New York leaders have put much more focus on and funding into the 2020 effort, to varying degrees. New York City government in particular has dedicated a great deal of energy and money into the effort to count its population, especially its many “hard-to-count” communities and demographics. The state’s efforts have lagged, and the federal government has been underfunding the Census Bureau (and Trump administration officials attempted to add a citizenship question that does not appear on the form but may have instilled additional fear of filling it out among many immigrants).

The Census can be filled out online, which is predominantly the methodology being prioritized this year. Most households will have received a digital code from the Census Bureau, though it is not necessary for filling out the questionnaire. The Census can also be filled out on the phone by calling 844-330-2020 or through a paper questionnaire mailed out by the Census Bureau, though only a limited number of households received those in the mail.

On March 12, the initial self-response phase of the Census began. As of March 31, according to the CUNY Mapping Service’s Census project, 31.1% of New Yorkers have already answered the ten questions asked by the Census, compared with the nationwide average of 36.2% so far. City officials were encouraged when the response rate by the end of the first week of the self-response phase was higher than it was at the same time ten years ago. Even now, the rate by March 31 was about the same as 2010 despite the challenges presented by the coronavirus outbreak.

In 2010, New York State’s overall self-response rate was about 76%, nearly the same as the national average, while New York City’s rate was only 62%. The low-self response rates in the past are indicative of the concentrations of hard-to-count populations in New York, including seniors, children under the age of 5, homeless people, public housing residents, predominantly African-American communities, Native Americans, undocumented immigrants, individuals who cannot speak English or have limited English proficiency, amond others.

New York City is estimated to be home to about 8.4 million people, according to the latest Census data available, about 43% of the state’s 19.4 million population.

Officials have also had to overhaul their plans for conducting census outreach, as the coronavirus has brought the state, and particularly the city, to a near standstill. New York City benefited from having worked for months on a broad outreach campaign, with $40 million allocated by the de Blasio administration and the City Council to fund the entire effort. That included $19 million in grants to 157 community-based organizations to reach hard-to-count communities directly.

The city census office recently held a two-day text-banking campaign, with 700 volunteers reaching nearly a million New Yorkers directly, it reported. Of all the people texted, 116,159 replied, and of them, 35,116 had already completed the Census while another 4,925 promised to do so, the office said. They also released a new PSA featuring Bronx-native rapper Cardi B that’s running on TV and digital media.

But the city was forced to suspend all in-person outreach, which is particularly necessary for the second phase of the Census – the enumeration phase, which involves people hired by the Census Bureau to knock on doors and seek responses from those households that fail to self-respond. Enumeration can yield inaccurate data and is already a daunting task without the limitations posed by the coronavirus. The city has instead redoubled its efforts to reach people digitally, through television, radio, and print ads shifting money away from other pre-pandemic plans. Phone- and text-banking have replaced on-the-ground pleas to fill out the Census.

The U.S. Census Bureau also cancelled its field operations till at least April 1, and extended the self-response deadline from July 31 to August 14. New York State, however, has been playing catch up on its census efforts for well over a year. The governor promised a $60-million effort that involved public-facing activities by state agencies, which never seemed to get off the ground and now mostly cannot because of the coronavirus. Of that funding, $20 million was meant to be distributed to community organizations but has not yet been doled out.

note - This article has been updated to clarify that the self-response rate as of March 31 is nearly the same as it was in 2010.