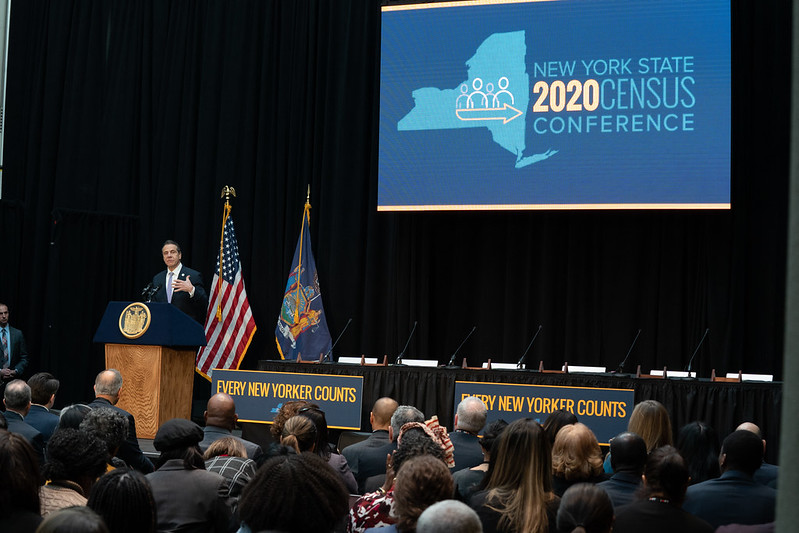 Before the coronavirus overwhelmed New York, Governor Andrew Cuomo wanted the equivalent of a $70 million effort to ensure that New Yorkers are accurately counted in this year’s Census. That was to include $10 million just appropriated in the state budget approved this past week. But the plans behind the Cuomo administration’s census campaign remain vague at best and nonexistent at worst as the state struggles to combat the coronavirus outbreak that hit after New York state government was already behind in its census efforts.

Before the $10 million just added in the new budget, the state was meant to spend the equivalent of $40 million in agency operations directed at the Census, with various state departments and entities said to be developing plans for how to best encourage the census participation that is so key to the state’s ability to achieve an accurate count and secure many billions of dollars in federal funding and appropriate representation in Congress.

The remaining $20 million had already been included in last year’s budget for direct grants to counties and community-based organizations that can reach hard-to-count populations, but there’s no indication it has been spent.

Despite repeated queries from Gotham Gazette over the last two weeks, spokespeople in the governor’s office and the New York Division of Budget, which reports to the governor, have provided no new information about the status of the state’s census efforts, including what impact the coronavirus has had. The only plans they provided are from before the outbreak, and mostly involve public-facing activities by state agencies that have become practically impossible or pointless to implement given the state’s near-shutdown due to the pandemic.

With the important 2020 Census self-response period now well underway, there is no indication that the state has awarded the $20 million in grants, fully developed the promised agency plans, or altered operations in light of the coronavirus fallout. This stands in stark contrast to both the U.S. Census Bureau and New York City, both of which have laid out clear plans and announced alterations to them as the outbreak unfolded.

As he’s dealt with the coronavirus crisis and negotiated the new state budget, Governor Cuomo has made only passing mention of the Census in recent weeks, at an April 1 news conference, when he encouraged New Yorkers to fill out the census questionnaire.

City and federal officials have noted in recent days that it has never been more important to fill out the Census. The decennial population count goes a long way toward determining levels of federal funding that the state receives for everything from education and infrastructure to social welfare programs. In a public health emergency like the one facing New York right now, census data is invaluable in deciding where emergency responses need to be targeted. The census is also the basis for drawing electoral districts, which in turn dictates how many seats the state will hold in the House of Representatives.

The $20 million grant fund has been in limbo for months. The funding was meant to be distributed based on a report by a state commission formed by the governor and legislative leaders. The commission was created past its deadline and issued a report after months of delay. The money was finally meant to be awarded starting March 10, but the state has given no indication that the money has gone out. A Division of Budget spokesperson referred Gotham Gazette to Empire State Development for information on the funding, then ESD referred the query to the governor’s office, which did not provide any new information.

If people were not mostly confined to their homes given the coronavirus outbreak, state agencies might have had success in ensuring that a wide swathe of New Yorkers were aware of the Census and the value of filling it out, though that would have in part been determined by the various agency plans that have not been made public. The effort is being coordinated by a cross-agency workgroup, according to the Division of Budget.

For instance, the Department of Motor Vehicles would have displayed census ads at its offices across the state, visited by 12 million people every year. Those offices are now closed indefinitely. The MTA planned on running ads on digital screens and distributing census literature at subway platforms and in buses. At monthly customer forums, Metro-North Railroad employees would have distributed flyers and handouts with census information. Station Managers would have done the same as they greeted customers as part of the “Station Talk” initiative. But many millions fewer people are taking public transportation these days.

State agency offices were broadly meant to be part of the effort including the Office of New Americans, the Division of Licensing, the Division of Consumer Protection, the Division of Community Services, the state Athletic Commission, and others. It’s not clear if any of them are doing anything with regard to the Census, even in the coronavirus reality.

Some outreach avenues may still be available as most government services move online-only and the Census is digital-first for the first time ever.

There are about 19.5 million visits to the DMV’s website every year while the agency also has a database of 4 million email addresses – the homepage includes a link to the Census website but nothing more. According to the original plans, the state Department of Taxation & Finance will send out 16 million “informational flashers” through the mail that will this year mention the 2020 Census.

In contrast with the state, New York City launched a far-reaching $40 million effort to count every resident of the city, well over 8 million people estimated to be about 43% of the state’s 19.4 million population. The city awarded $19 million of that money in December to community-based organizations that are considered “trusted voices” in ensuring that people who may otherwise not respond or are wary of the government are accurately counted. The city also quickly pivoted when the coronavirus made on-the-ground operations unfeasible. The city census office renegotiated advertising contracts with the MTA, for instance, as ridership was plummeting and reinvested it into various forms of media that can reach people in their homes, and moved from in-person event plans to digital forums and text-banking.

Laying the early groundwork has also shown some positive results, as the rate of self-response in the first week after the Census launched was higher than in 2010. [Read: City Reconfigures 2020 Census Efforts in Response to Coronavirus — and Reports Good Initial News]

As of April 4, just a few weeks into the count, the city’s self-response rate was 33.4%, the state’s 38.3%, and the national rate 43.9%, according to the CUNY Mapping Service’s Census tracking project. The New York numbers have been somewhat encouraging to officials who hope New York City will be above its low 62% self-response rate in sum for 2010, which compared to 76% for the country.

The current self-response phase, the most important of the Census effort, is now due to last through August 14 after the U.S. Census Bureau made initial adjustments to account for coronavirus’ impact.