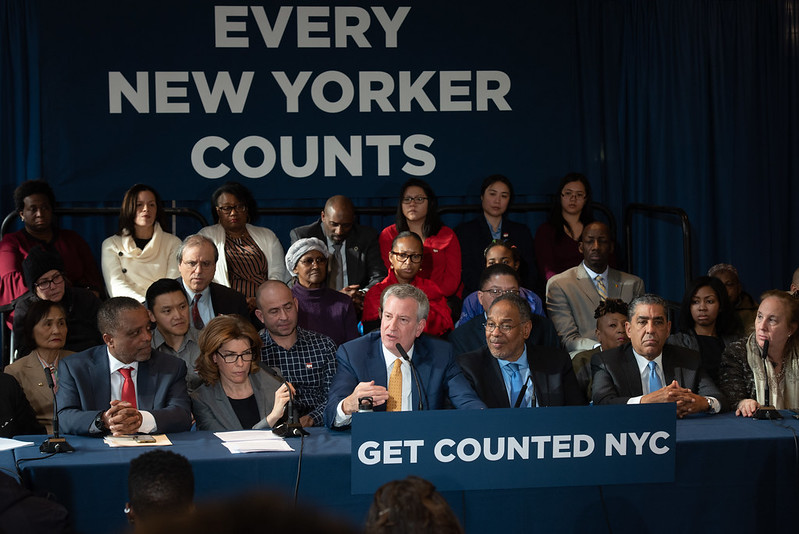 With less than a month left till the U.S. Census Bureau intends to end its constitutionally-mandated decennial population count, elected officials and advocates issued a dire warning to New Yorkers on Tuesday to fill out the Census questionnaire or risk losing crucial funding for a raft of federal programs as well as political representation in Congress.

Last month, the Trump administration moved up the deadline for the 2020 Census from October 31 to September 30, leaving the Census Bureau and local and state officials scrambling to ensure an accurate count, which has already been thrown into jeopardy by the coronavirus pandemic. The Census Bureau currently has enumerators out in the field attempting to count those households that have not self-responded through the online portal or by mail.

As of August 31, the nationwide response rate to the Census was 64.9%, according to the CUNY Mapping Service’s Census tracking project; New York State’s response rate was 61% and New York City’s was 57.7%. Census data is used to determine many billions of dollars in funding to states and localities and seats in the U.S. House of Representatives.

At a Tuesday news conference, New York elected officials and Census advocates raised concerns about the state’s response lagging behind the nation and the detrimental effects that could have over the next decade. The Census count determines how the federal government distributes funds for everything from education and health care to infrastructure, transit, and a range of social welfare programs. It also forms the basis for drawing electoral districts at the local, state, and congressional levels and New York, with it’s already declining population, stands to lose as many as two seats in the House due to an undercount in the Census.

As U.S. Senator Kirsten Gillibrand pointed out at the news conference, New York receives more than $73 billion in federal funds annually for 55 programs, out of a $1.5 trillion pot.

“We need that funding to respond to this pandemic and prepare for the next one,” she said, noting that the state could lose money for Medicaid, maternal health, housing assistance, among other programs. “The federal government won't know how much our communities should get if they don't know how many people live there,” she added. Gillibrand has joined with Democratic and Republican Congressional representatives to call on the Trump administration to extend the deadline for delivering Census data and has pushed for that provision to be included in any potential stimulus package that is approved by Congress.

“The Census is more important than ever amidst the ongoing pandemic, which has already badly harmed our state and city budgets and has laid bare many of the inequities that currently exist in our communities,” said U.S. Rep. Jerry Nadler of Manhattan and Brooklyn. “If we don't get an accurate count, this will only be made worse.”

The Trump administration’s move to shift the deadline has also been challenged in court and, on Tuesday, New York State Attorney General Letitia James filed an amicus brief in that case on behalf of a coalition of 23 attorneys general, five cities, four counties, and the U.S. Conference of Mayors.

“An undercount would skew state and local representation when the districts are redrawn and federal funding could be drawn off and decreased for many urban areas with large immigrant populations like New York City,” James said at the news conference. “This could affect our roads, our bridges, our schools, the number of first responders we have in our communities and so much more. And while each of these situations are on face value costly, it's important to note that what is at stake is so much more than just numbers. It's about the people who will be adversely impacted by these numbers.”

What makes the Census particularly challenging in New York is the number of hard-to-count communities that tend to not participate in the Census or that are often miscounted. That includes immigrants, low- and middle-income Black communities, Native Americans, seniors, children under the age of five, people with limited English proficiency and non-English speakers, among others.

President Donald Trump has also taken several steps that seemed geared towards discouraging participation. His administration unsuccessfully attempted to place a citizenship question on the Census and underfunded the Census Bureau. On July 21, Trump also issued a memo to Secretary of Commerce Wilbur Ross, ordering that undocumented immigrants be excluded from state populations for the apportionment of congressional representatives. That order has been challenged in court.

“Under the Trump administration, the Census has become about fear and misinformation,” said Meeta Anand, the Census 2020 senior fellow at the New York Immigration Coalition, at Tuesday’s news conference.

Recognizing those many challenges, city officials are in the midst of a concerted $40 million Census outreach campaign and recently launched a home-stretch effort, particularly to target areas where the response has been far lower than other parts of the city.

Led by Census Director Julie Menin, appointed to the role by Mayor Bill de Blasio, the city launched a massive ad campaign across 26 languages, more than 175 publications and websites covering radio, television, social media. City Census workers have made more than 3.5 million phone calls and sent more than 7 million texts about the Census, getting more than 423,000 New Yorkers to fill out the questionnaire, the city Census office said.

The city is also attempting to reach the thousands of New Yorkers who left the city during the pandemic but who requested absentee ballots for the recent primary elections. Many of them completed the Census using their temporary addresses, which would require them to re-fill the questionnaire, which takes roughly 10 minutes, to be counted as New York residents.

At the state level, Governor Andrew Cuomo re-launched some semblance of Census outreach efforts at the end of July after months of inaction. The state was originally pledged to put $70 million toward the Census, including grants to community outreach groups and the reallocation of state agency resources, but the Cuomo administration did not follow through, in part, it has indicated, due to the budget crunch resulting from the coronavirus pandemic.

As part of a recent “Census Push Week,” the state said it was partnering with Spanish-language media outlets to conduct phone-banking, while several public-facing state agencies such as the MTA and Department of State’s Division of Licensing Services rolled out awareness initiatives of their own. There has been little additional news, however. A request for comment to Empire State Development, the state’s economic development agency that is overseeing the Census effort, went unanswered.