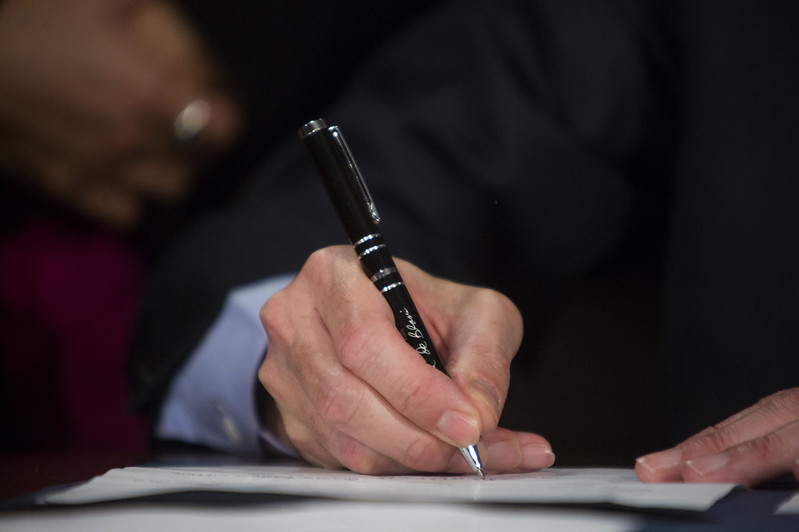 Make sure to sign your ballot (photo: Ed Reed/Mayor's Office)

Among a package of changes to New York state election law passed since the chaotic June primaries is a provision that requires the Board of Elections to notify voters when their absentee ballots are on the verge of being thrown out and give them a chance to correct certain potential disqualifications. Designed to ensure possibly tens of thousands of intended votes are actually counted, the “curing” mandate applies to a handful of often disenfranchising technicalities, but the newborn steps may add a challenging addition to the already heavy load election administrators are facing as they contend with huge turnout by mail and at the polls.

Roughly 80,000 mail-in ballots were rejected by the New York City Board of Elections (BOE) in June, a vast majority due to issues with the signature on the inner "oath" envelope. Twenty-three percent of absentee ballots were rejected, roughly the same as in the 2016 presidential primary election, but with a twelve-fold increase in the total number of such ballots this year, according to the BOE. With so many people voting by mail due to the coronavirus and related expansion of absentee balloting, lawmakers attempted to mitigate widespread disenfranchisement.

Over 1 million voters had already requested absentee ballots for the general election as of October 20, according to the city BOE, which said at the time it had processed almost all of them. The deadline to request an absentee ballot is October 27. There were roughly 5,320,000 registered voters in New York City as of February 20, per State Board of Elections numbers.

Mail-in voting, like check-in at a poll site, requires the voter to provide a signature that can be compared against the one on their registration. The new law, passed by the State Legislature in July and signed by Governor Andrew Cuomo in August, applies to oath envelopes with missing or incorrect signatures, or to ballots returned without the inner envelope altogether.

If an error is found, county boards of elections must now notify the voter, explain why their ballot was rejected, and provide a form through which they may "cure" the mistake. The BOE must send the form through all possible channels, including by post and email, and must begin the process almost immediately after catching the error. Cuomo signed an executive order in August allowing administrators to begin examining ballot envelopes for possible defects "as soon as possible" (though state law requires the inner oath envelopes remain sealed and uncounted until seven days after Election Day to ensure all votes are received).

"We are encouraging the voters to return [absentee ballots] to us as quickly as possible," said BOE executive director Michael Ryan at a City Council oversight hearing in September. "It will provide the maximum period of time to engage in the newly created cure process," he told lawmakers.

"Clearly the sooner that happens the better. If it happens a day before Election Day it's going to be very difficult for the process to be completed," Ryan said. The BOE must accept absentee ballots mailed by or on Election Day (November 3). If administrators determine a ballot is eligible for remedy by the voter, the BOE must begin trying to tell the voter within a day, or the same day if the determination happened on or after Election Day.

The cure form must be completed and returned within seven days of notification if the absentee ballot was received by the city BOE before Election Day, and -- for the 2020 general election only -- within five days if it is received on or after November 3.

The statutory deadline to certify election results is November 28.

The provision may add to an already sizable headache for the BOE which has been attempting to control damage caused by a printing error that resulted in as many as 100,000 Brooklyn voters receiving an oath envelope with another voter's name. The board sent out guidance to impacted voters, instructing them to destroy old ballot materials and providing new ones.

But thousands of unsuspecting voters may have submitted the incorrect envelope with a mismatched signature. It is unclear how the ballot cure law will impact them and whether registered voters whose envelopes were mistakenly signed by someone else will be given an opportunity to cure the defects on another voter's ballot. The new curing law was not specifically designed to account for such a mistake.

An aide to State Senator Zellnor Myrie, a Brooklyn Democrat who chairs the elections committee and sponsored the cure bill, said the BOE may have no way of knowing who the incorrect signature belongs to. Administrators will be able to inform a voter whose ballot was incorrectly "used" but the person who accidentally cast the ballot -- voted, signed, and returned an envelope -- may not know that their attempted vote was not counted, unless they catch the mailing or track the status of their ballot online (a new feature in New York City this election).

The New York City Board of Elections did not respond to requests for comment for this article.

​An "overwhelming number" of invalidated absentee ballots in June were the result of completely missing signatures, Ryan said in September. To help avoid this problem, the state has placed a large, red 'X'red 'X' on the inner envelope to indicate where a signature is required.

The cure form asks the voter to attest "to the same information required by the affirmation envelope" and "that the signer of the affirmation is the same person who submitted such absentee ballot," according to guidelines issued by the State Board of Elections to county boards.

The new requirements entail brand new procedures in an already tumultuous election cycle for administrators that is expected to see enormous voter turnout for the presidential election.

Above all is the new requirement to notify voters, and state guidelines say that message must be conveyed through virtually every channel available to the BOE. When an absentee ballot is received, evaluated, and put in line for rejection before Election Day, the BOE must attempt to contact the voter at the address on their registration and the address indicated on their absentee ballot application. If the board has any email addresses or phone numbers on file, it must make attempts on all of them.

"What might be seen as the greatest departure from the normal process is the notification. Having to notify a voter that there is some defect, either by phone or email, is the introduction of a step that wasn't there before," Myrie told Gotham Gazette. In the high-turnout 2020 elections, he acknowledged that is a big lift, but one that would help "restore credibility to the [voting] process."

Some additional provisions have been set out by executive order that partially ease the burden on administrators for cures to ballots received on or after Election Day. When Cuomo signed the bill into law, he included a memorandum saying it would apply for the 2020 general election but would be revisited to determine its permanence.

For ballots received on or after Election Day, which is November 3, the guidelines allow administrators to forgo a physical mailing unless both no email is available and no contact is made by phone. The leeway applies only to the 2020 general election.

The guidelines also say county boards must notify voters even when their ballots are rejected for reasons that are not curable. If the cure itself is rejected before Election Day, administrators are required "to the extent practicable" to inform voters and give information of alternative ways to vote.

"There is an entire process set up by which they examine absentee ballots...what this bill does requires them to then make a notification," Myrie said. In doing so, it also adds a new document that will need to be processed on a large scale.

All of this takes time and resources. The BOE estimates the total canvassing process -- the time it takes to review all the votes cast -- will take 21 days from Election Day, placing final official results somewhere around November 24.

Part of the extended timeline is because envelope signatures for mail-in ballots are examined by hand by bipartisan teams -- one Democrat and one Republican -- as are many functions carried out by election administrators. If the BOE team makes a preliminary ruling of a mismatched signature, a team of managers reviews the decision. State guidelines advise boards that signatures are variable and may not always match the one on file, even if they are correct. The state BOE has instructed local administrators to "presume that the documents were signed by the same person."

The BOE expects a high number of ballot cures but a report on the city's staffing needs, submitted to the state Board, omits information on the status of personnel hired to carry out the process.

"Given the anticipated volume of individual cures and to ensure the timely processing of same, the final stages of automation to assist in processing is being completed. Upon completion, the Board will finalize the number of staff assigned to this task," reads the report. As of October 14, the city BOE had not provided those figures to the state.

A spokesperson for the state Board said they believed recently purchased vote-sorting machines have the ability to file ballots based on missing envelope information.

Other issues don't require a cure according to guidance from the state BOE. That includes wrongly placed signature, incorrect date, use of pencil or pen, extra paper when it is material provided by the BOE, random marks or tears on the envelope that look like the result of mailing.

When voting by mail and hoping to avoid the curing process altogether, voters should ensure both the return envelope and inner "oath" envelope are fully sealed, and that the inner one is signed and correctly dated.