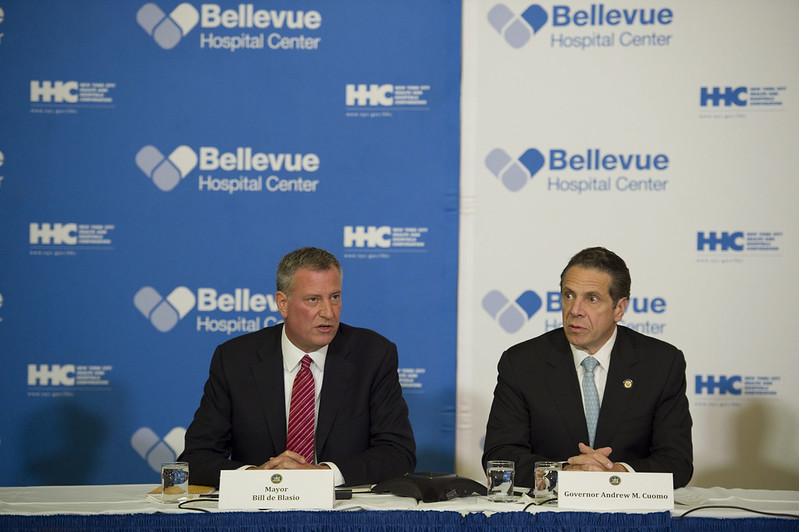 With so much on the line, Mayor Bill de Blasio is pushing leaders in Washington, D.C. to allocate direct aid to New York City in the next big federal stimulus package, currently being negotiated among President Joe Biden and members of Congress. At the same time, de Blasio is calling on the State Legislature to help him stop Governor Andrew Cuomo from continuing to syphon off hundreds of millions of dollars in federal aid coming through Albany.

Both de Blasio and Cuomo have said billions of federal dollars will be essential to the region's economic recovery and necessary to prevent city and state budget cuts. With $350 billion in the stimulus plan proposed by Biden going to state and local governments, New York City and State officials are waiting to see what the final package looks like, including the formula for how the proposed funds will be distributed and whether aid for the city will flow directly rather than through the state. After federal aid from the CARES Act, passed in March 2020, and other sources was used to supplant, rather than supplement, over $700 million in state aid to the New York City school district last year, the mayor is leery of aid going through the state.

The city is facing a $10.5 billion revenue shortfall across fiscal years 2020 to 2022, de Blasio said last month when he unveiled his $92.3 billion preliminary budget for fiscal year 2022, which begins this July 1. That budget is more than $4 billion larger than the current budget, which was cut to account for major drops in revenue, a situation that was improved by federal aid and higher-than-anticipated tax revenue. The last stimulus package, passed in December, included a total of $54 million for New York overall. But there are still major concerns about what tax receipts, especially property taxes, will look like next fiscal year and beyond.

"Last year, the state supplanted over $700 million in education aid. And now, the State is proposing to supplant again – taking almost $800 million in funds away from our students," he said, adding that Cuomo’s new Executive Budget plan proposes pushing another $279 million in additional charter school costs on New York City in fiscal years 2021 and 2022.

The latest federal projections came in a letter from House Speaker Nancy Pelosi to New York's Democratic delegation Thursday, outlining roughly $12.7 billion in direct aid to New York State and another $10.6 billion to local governments. New York City is on track to receive $5.62 billion directly under the House proposal, which passed the House Committee on Oversight and Reform, chaired by New York City Rep. Carolyn Maloney, last week and is subject to change as the package moves through Congress and onto the president's desk. Cuomo has said if New York State does not receive $15 billion in the next federal package, programs will come onto the chopping block, but his claims of the state facing that large of a two-year deficit have been debunked, in part given the major federal aid that has already flowed to New York.

In total, the House bill includes over $70 billion to New York with $23.3 billion going directly to state and local governments, according to a statement from Maloney's office.

With stimulus aid coming to states and localities "some goes to the state for the state to dole out, some of it goes directly to cities for cities to use for their own want, if you will," explained Bill Neidhardt, de Blasio's press secretary, in an interview with Gotham Gazette last week.

"That is what we're calling for in this upcoming stimulus. We think there should be direct aid to cities," he said. "We've been pushing leadership in the Senate and I'm pretty sure they hear us," he added, in apparent reference to new U.S. Senate Majority Leader Chuck Schumer of Brooklyn.

Neidhardt said the city was seeking "significant" direct federal aid but that there was not an exact figure attached to the request.

In a January 20 interview on the Max & Murphy podcast, Neidhardt discussed the HEROES Act, which passed in the Democratic majority in the House last May but died in the then-Republican-controlled Senate, as an example of what the city was hoping for. That bill included over $1 trillion in state and local aid, including direct aid to New York City, according to Neidhart.

"The HEROES Act, which was passed by the House months ago, had a really good formula that directly gave to cities because they know federal aid going direct to cities can implement that money quicker, more equitably, and more justly," he said.

But the state could reduce their allocation to the city whether or not federal aid flows through the state, according to Ana Champeny, Director of City Studies at Citizens Budget Commission, the fiscal watchdog.

"Even if the education aid had come straight to the city [the state] could have done the same thing," Champeny said in an interview. "The direct doesn't necessarily mean that you're not going to have a reduction in state aid."

Aid to New York City in Cuomo's Executive Budget for fiscal year 2022, which begins April 1 of this year, is expected to top $19.7 billion -- a nearly $1.7 billion increase over the previous year, according to the budget briefing book from the state Division of the Budget. Most of that increase -- over $1.4 billion -- is from a bump in education aid.

The portion being contributed to New York in that budget plan from state dollars is virtually flat -- an increase of $53 million, according to Champeny. The remaining increase comes from a jump in federal school aid from $721 million in the current fiscal year to $2.15 billion projected in the next, which totals just over $1.4 billion, Champeny says.

Total school aid to New York City in the Executive Budget -- which is now the subject of legislative hearings and negotiations before an adopted budget is due April 1 -- is over $13 billion in fiscal year 2022, according to state budget officials. The Division of the Budget accounts for another $2.4 billion in aid to New York City from the state covering growth in the city's Medicaid costs, a state initiative dating back to 2015.

Overall, state aid as a percentage of total city revenue has shrunk over the last ten years but a bigger proportion of city revenue last year came from non-city sources than in previous years.

After four federal stimulus packages in the first half of 2020, the New York City budget got a boost of $5.3 billion, according to an analysis from the Independent Budget Office last May.

Last month, the United States Conference of Mayors sent a letter to Congress urging federal help to local governments with signatures from de Blasio and about 400 other mayors across the country.

"The lack of adequate support has resulted in budget cuts, service reductions, and job losses," the letter read, in part. "Providing direct, flexible aid to cities is the most efficient and immediate way to help families and their communities who have been suffering for far too long."

Complicated budget maneuvering can make it difficult to track exactly how much state aid is supplanted using federal aid but efforts have been made to prevent it in previous stimulus packages. The CARES Act, for example, included a stipulation that costs had to have been incurred since the pandemic in order to be covered and could not include spending previously budgeted for.

Doling out money to cities and localities with varying governmental structures can be a cumbersome task for federal lawmakers and giving on a state basis to be disbursed locally can be a matter of expediency. But a municipality as big as New York City can coordinate with Washington as well as many state governments, budget experts say.