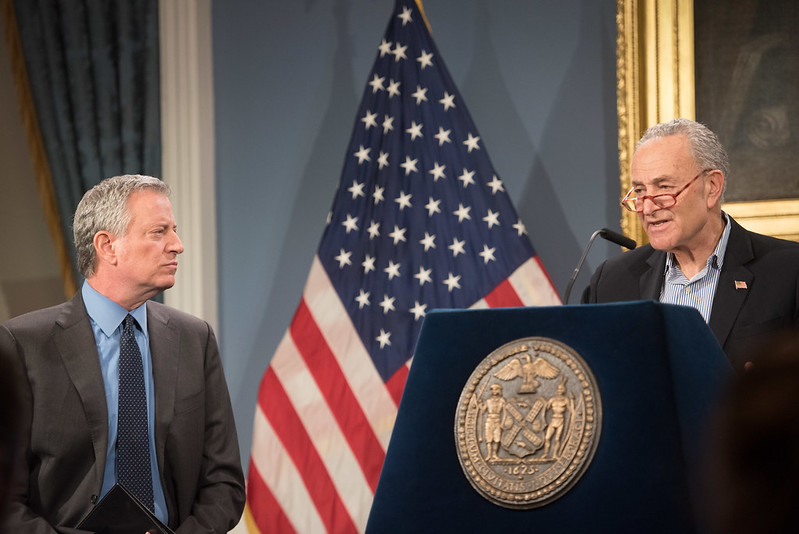 As the coronavirus crisis drains city coffers with an enormous level of emergency government spending and the mandated shutdown of the economy has led tax revenues to plummet, New York City faces an estimated $8.7 billion budget gap. Mayor Bill de Blasio has said the hole is dire and the extent to which the city will be shored up to weather the storm depends largely on what it will receive in federal aid.

While lobbying and negotiations continue that question is still up in the air, but a new report from the New York City Independent Budget Office (IBO) estimates the city government will receive $5.3 billion from the four federal coronavirus ‘stimulus’ packages that have been passed thus far, mostly over the course of the current and upcoming fiscal years. The federal funds have been targeted toward reimbursements for expenditures in the coronavirus fight, not to make up for missing tax revenue, which is the source of an ongoing push by city and state elected officials.

The funding falls into four categories identified by IBO: public health, community development and housing, education and child care, and social services and criminal justice. Other public agencies that provide government services but fall outside the city budget, like the transit and housing authorities and the city's public hospital network (a huge expenditure), have or will receive federal funding but are not included in the IBO's estimate.

The report also does not account for reimbursements to city government from FEMA, the Federal Emergency Management Administration, money from which flows outside the ‘stimulus’ packages. (And the report's final tally also does not include the $620 million IBO estimates will go directly to individual New Yorkers through the Supplemental Nutrition Assistance Program, or food stamps, among other direct aid to individuals and families.)

As of May 7, New York City had already spent $1.4 billion in response to the coronavirus outbreak and in the executive budget proposal for Fiscal Year 2021 the administration estimated up to $3.5 billion could be spent on the effort by the end of this calendar year. That estimate may be dwarfed by the reality, as city spending has doubled over the last three weeks. The IBO predicts the city's tax revenue shortfall over the current and next fiscal years will total $9.5 billion.

"The majority of the $5.3 billion in aid that IBO projects the city will receive must be used to cover direct costs incurred by the city due to the Covid-19 pandemic or to fund programs that provide aid to city residents impacted by the resulting downturn, such as increased funding for existing food and rental assistance programs," the report reads.

At his press briefing on Sunday, de Blasio continued to stress the need for a federal “bailout” of the city’s budget. "We have to get support to allow us to keep going in this city, to be made whole to be able to provide those services,” the mayor said. “But especially since we don't know what's going to happen in Washington, we right now are absolutely dependent on whatever resources we can get.” De Blasio has also stressed the need for federal aid for some of the most essential components of getting the economy restarted, including COVID-19 testing and contact tracing of those who test positive.

"Everything hinges on the stimulus, our ability to support the people of this city," he added. "And if it comes, you know, we're going to be able to be helpful in a lot of ways. If it doesn't come, it's going to be very, very difficult."

New York State has been hit harder by the outbreak than any other state and New York City represents the worst of the crisis. As of Monday afternoon, almost 179,000 people have tested positive, and nearly 45,000 have been hospitalized citywide to date, with nearly 20,000 confirmed or suspected deaths.

The city has already received $2.3 billion from federal stimulus packages for the current and upcoming fiscal years, according to a spokesperson for the mayor. The spokesperson could not confirm the IBO's estimates, which peg another roughly $3 billion due to the city.

A significant portion of the federal funding the IBO estimates the city could receive will be given to the state to be distributed to localities, though the amount is not specified. As of a recently-released budget plan, Cuomo is planning to slash billions of dollars in aid to localities and this year’s budget language gives him the authority to do so throughout the fiscal year, though the governor has stressed he prefers for the federal government to come to the state’s rescue.

Governor Cuomo has said that, while the federal aid is useful in responding to the immediate public health needs raised by the crisis, it does little to address the state's massive revenue losses, which are estimated to be between $10 and $15 billion this year, which could mean significant reductions in state aid to localities.

A majority of the federal funding the city will get comes from Washington's third and largest ‘stimulus’ bill, the Coronavirus Aid, Relief, and Economic Security (CARES) Act, which set aside $2 trillion "in direct support to households, businesses, states, some local governments, and the health care industry," according to the IBO report.

"The federal stimulus bills have provided significant funding, but most is to cover new pandemic related spending,” wrote Ana Champeny, Director of City Studies at Citizens Budget Commission, a nonprofit fiscal watchdog, in an email to Gotham Gazette. “The City plans to use about $2 billion in federal aid to help close its budget gaps. But this will not solve the whole problem or address the significant risks that the economy will be worse than projected and that the State may make significant local aid cuts. The City should identify significantly more recurring savings to manage this fiscal crisis, even if it receives additional federal aid in the future.”

The IBO notes uncertainty in its report. "New data is being released on a near-daily basis, however, and details of many of the local funding formulas have yet to be published," the report states.

Over $1.5 billion, a full quarter of the estimated funding, will come from the CARES act directly to the city under a provision that allows local governments with populations over 500,000 to receive funding directly, which would otherwise go to states. The act mandates these funds go to “necessary expenditures incurred due to the public health emergency with respect to the Coronavirus Disease 2019,” and spending from this pot must happen within the calendar year and only for costs not included in the city's budget before the law was signed, according to the IBO report. That amount is almost identical to what New York City government says it has spent so far, mostly through the city’s Department of Citywide Administrative Services and the city’s public hospital system, NYC Health + Hospitals.

Public Health
The largest federal funding area is for the city's public health response. The IBO estimates the city will get $1.9 billion from health-care provisions across the four stimulus packages. Half of that is likely to come from restructured Medicaid funding, which is controlled by the state and can be passed onto the city by an "expected" $1 billion "if the state allows the savings...to flow through to localities across the state," according to the IBO report.

The IBO estimates another $845 million to go to the New York City health department for COVID-19 testing and another $44 million could go to contract tracing, personal protective equipment, and expenses related to monitoring the virus' spread. In a controversial move, Mayor de Blasio recently announced that Health + Hospitals would run the contact tracing program instead of the health department, though health department leaders will be involved, per the mayor’s plan.

Community Development and Housing
The second largest funding category is for community development and housing, totaling roughly $972 million, almost half of which (nearly $473 million) is in new Community Development Block Grants. The IBO notes requirements on spending the block grant funding is "relatively flexible" and can go to anything from new construction to economic development and professional training programs. Another portion of roughly the same amount will go to homelessness and housing programs.

Education and Child Care
About $927 million from the CARES Act will go to education and child care services in New York City. A vast majority of that, $716.9 million, comes from the federal Education Stabilization Fund to the state to be passed on to the city. This new funding is offset in the state's enacted budget for Fiscal Year 2021, which Cuomo signed one week after the CARES Act became law, by a "Pandemic Adjustment" -- a reduction in school aid to the tune of exactly that same amount: $716.9 million.

While the federal funding "represents a considerable sum to help pay for the city’s Covid-19 response, it does little to address the $9.5 billion shortfall in city tax revenue that IBO expects to result from the economic downturn caused by the pandemic over the 2020 and 2021 fiscal years," the IBO report notes.

Social Services and Criminal Justice Programs
The smallest of the four broad categories of aid the IBO identified is for social services and criminal justice initiatives, which account for almost $84 million in federal support. Over a third of that comes through the Community Service Block Grant and will go mostly through the city's Department of Youth and Community Development, according to the report. A little over $18 million more will go toward senior meals services. Almost $14 million will go to housing assistance and support for low income individuals and people living with HIV/AIDS. Federal lawmakers allocated $1 million in additional child welfare funding.

IBO estimates the CARES Act will allocate just under $13 million for Justice Assistance Grant funding, which is used by the NYPD, Department of Correction and the Mayor's Office of Criminal Justice to fund criminal justice-related expenses.