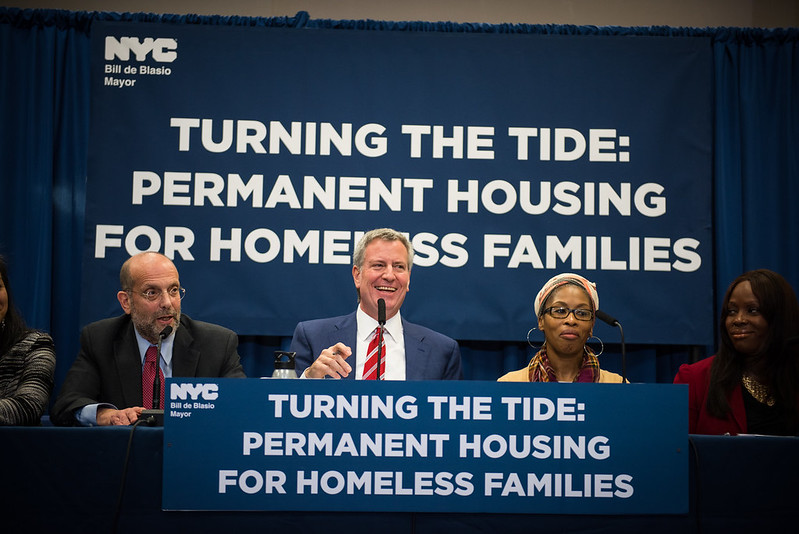 As the de Blasio administration comes to a close, the mayor and his top commissioners have been reflecting on their legacies. Mayor Bill de Blasio has repeatedly said over the years that his biggest failure was on homelessness, acknowledging that he did not fully grasp the degree of the problems involved and the necessary solutions. He has said in recent weeks that he believes the administration started to really get things moving in the right direction as his first term ended and second term began, which coincided with a new plan and overhaul of the management of homeless services announced in 2017.

The most recent “shelter census” places the number of New Yorkers in city homeless shelters at over 45,000, down significantly from a high well over 60,000, in part due to the pandemic era eviction moratorium, but also several policies the de Blasio administration has put in place.

Still, virtually everyone would agree the number is still far too high, and there are persistent issues with unstable housing for many families -- according to one study, over 100,000 children were homeless at some point in 2020 -- as well as people living on the streets or in the subways, and the growing prevalence of homeless single adult men, many of whom have serious mental illness or substance misuse disorder.

The past several years have seen many local fights over a signature piece of de Blasio’s proposal, part of the 2017 Turning the Tide plan, to open 90 new homeless shelters in neighborhoods all across the city -- as part of an effort to actually shrink the overall shelter footprint by also closing down notorious “cluster sites” and moving away from the use of commercial hotels -- and give people experiencing homelessness a chance for temporary shelter in their communities, providing a better opportunity for them to get back on their feet.

The architect of the Turning the Tide plan and the man in charge of the de Blasio administration effort to reduce homelessness since 2016 is Steven Banks, Commissioner of the Department of Social Services. Banks, one of the few top de Blasio appointees to remain at his post through the mayor’s two terms, was appointed as the Human Resources Administration (HRA) commissioner in 2014, a position he has continued to hold while also adding homeless services to his purview. HRA is the city agency that connects New Yorkers to public benefits, especially things like food stamps, cash assistance, and housing vouchers.

Banks believes the city made meaningful progress in combating homelessness and major steps forward on administering public benefits during the de Blasio years, accomplishments he expounded upon in a recent ‘exit interview’ on the Max Politics podcast from Gotham Gazette.

The number of homeless people living in shelter did top 60,000 in 2019, which Banks attributed to such factors as the increasing unaffordability of the city and the disappearance of affordable housing like single-room occupancy (SRO) units. But it was dropping slowly just before the pandemic and then went down significantly over the course of 2020 and 2021, a fact that Banks ascribed to federal and state eviction moratoria, among other efforts.

“46,000 people, we have to do better than that, I still believe that,” Banks said. “But we’ve driven it down from a much higher place.”

One of Banks’ most notable initiatives heading homeless services was closing dangerous “cluster site” apartments that were used as temporary housing for homeless people via city contracts, and where the city often paid whatever rent the private landlords charged; instead, Banks and the mayor wanted to open dozens of new shelters with wraparound services all across the city.

The expense of housing homeless people in congregate shelters versus simply paying rent on an apartment has dogged Banks and DHS for years, especially as many homeless service providers used city contracts to enrich themselves. And virtually every shelter that the de Blasio administration has tried to site has been the subject of extensive opposition by local community boards.

While the family homeless population in city shelters declined substantially, Banks said, the single adult population conversely rose by multitudes, which he attributed to a “prison to shelter pipeline” brought about by deinstitutionalization and decarceration combined with a lack of reentry and other services.

Banks credited recent moves at the city and state levels to increase housing voucher rates so that more people will be able to find apartments, noting that Governor Kathy Hochul had just signed one measure into law that he had sought from the state for eight year. "At the state level, we haven't had a state partner for the last eight years,” Banks said of the Andrew Cuomo administration. “We had a state adversary."

Before coming into government in 2014, Banks was a prominent attorney at the Legal Aid Society who constantly sued the city on behalf of homeless clients: one of his first lawsuits, in fact, established the right-to-shelter in New York City, which remains one of the few big cities to have one.

While homelessness is often the main area of Banks’ work that is focused on in public discourse, his reforms at the Human Resources Administration, which administers federal, state, and local benefits programs, often get overlooked. There is overlap, of course, given that several key benefit programs administered by HRA are meant to keep people from becoming homeless or to help them return to stable housing.

Which is why it made sense to Banks, and de Blasio, that the Department of Homeless Services be added to Banks’ purview, with DHS combined with HRA after 20 years of being separated. On the podcast, Banks said the move, which came after Banks led a de Blasio-ordered review of city homelessness policy, was a recognition of the condition of homelessness as a complex societal problem that could be addressed before it occurred by intervention involving social services, such as the payment of rent arrears or providing free legal counsel in housing court to tenants facing eviction.

“Having a freestanding agency didn't reduce the shelter census,” Banks said, noting that the population had increased 115% in the time the agencies were separated. “I think the integration of the key two agencies was sort of integral to taking a more comprehensive approach to homelessness rather than it just being one agency alone trying to deal with this social problem.”

On administering the city’s provision of public benefits, Banks touted his greatest reform of that system as allowing potential recipients to apply for benefits like food stamps online or on the phone, rather than in-person at an HRA intake center.

“You and I do our banking online, you rarely go to a teller, I rarely do, too,” Banks said. “So why couldn't our clients have the same opportunity? Not a requirement, but an opportunity to do business online, therefore providing an opportunity to people who needed more help who wanted to come into an office, it wouldn't be overcrowded, the staff would be able to focus on more complicated cases.”

The department long tried to get approval to do the same with cash assistance, and Banks described a long period where on the food stamp side of a benefits office, “the sun was shining” while “dark clouds” hung over the cash assistance side; the city finally received the necessary waivers to do it during the pandemic, but Banks said it will be up to the Adams administration to scale it up.

Banks cited as an improvement his reforms to ‘welfare’ cash assistance programs that loosened work requirements, “eliminating the punitive approach,” and sought to avoid “churn” on the welfare rolls that did not really help people but gave the appearance of reducing the number of people receiving such benefits.

Banks’ Human Resources Administration was also responsible for operation of some of de Blasio’s most notable policies aimed at lifting up working class New Yorkers, including the IDNYC municipal ID program for any New Yorker regardless of immigration status, and the Fair Fares program providing half-priced Metrocards to many living in poverty.

"The arc of history is bending towards a place where we don't have people who don't have a roof over their heads,” Banks said. “It's gonna require a combination of federal, state, and local collaboration. And I can see some positive signs on the horizon, even though if I come to work every day, I see a lot of suffering no matter how our reforms have made such an impact on tens of thousands of people, they're still suffering every day. But I remain hopeful that the government could bring to bear.”

Now, Banks is heading to Paul, Weiss, a high-profile, high-end law firm that also has a public interest practice he will help lead. On the podcast, Banks said he believes the “next frontier” in the fight against homelessness goes beyond other cities emulating New York’s right to shelter, but rather for cities, including New York, to adopt a “right to housing.”