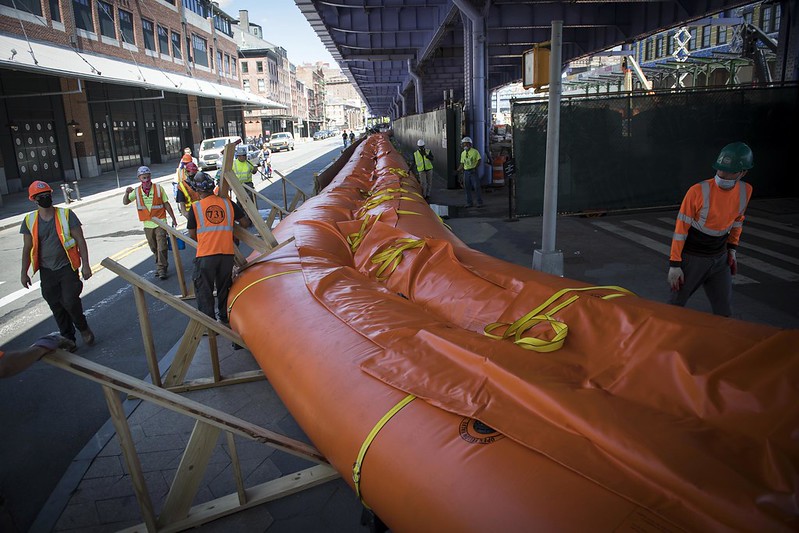 In November, Congress approved President Joe Biden’s $1.2 trillion infrastructure plan, which is expected to deliver tens of billions of dollars to New York City for crucial needs. As the city prepares for the influx of federal funds, experts are pointing to several priorities that they believe Mayor Eric Adams should pursue, and the new Democratic mayor will no doubt be evaluating his priorities as he continues to map out his own infrastructure plans, including through budget negotiations with the City Council.

And the 51-member Council wants to ensure that the funds are used smartly and equitably, particularly in underserved neighborhoods. In that vein, the Council is holding an oversight hearing on Tuesday, “Assessing New York City’s Infrastructure: Laying the Foundation for Federal Infrastructure Funding.”

Under the federal infrastructure law, called the Infrastructure Investment and Jobs Act (IIJA), New York State will receive about $27 billion for mass transit, roads and bridges, broadband, climate projects, and more, significant amounts of which will flow to the city. There are also billions more available through competitive grants under the law.

The Metropolitan Transportation Authority (MTA), which runs the city’s subways and buses and two commuter rails, is receiving about $10.7 billion alone, which will help fund projects like the expansion of the Second Avenue Subway and direly needed accessibility projects across the system. There is about $2 billion for bridges and tunnels in the city and $685 million for airports, $100 million for broadband infrastructure statewide, $175 million for electric vehicle charging stations statewide, and $50 million for street safety infrastructure in the city, according to estimates from former Mayor Bill de Blasio. The overall plan also allocated $66 billion for Amtrak, with about $8 billion going to the Gateway Project, which includes the crucial repair of the Gateway Tunnel connecting New York and New Jersey.

“The bipartisan infrastructure is a record deal and a once-in-a-generation investment in New York infrastructure,” said New York Senator Chuck Schumer, the Democratic Senate majority leader, in a statement when the deal was approved. “A building and jobs boon for construction projects from Westchester to Watertown, and everywhere in between is now brewing.” Schumer touted the many results the funding will help achieve. “Whether it’s our mass transit system, critical bridges or highway repairs, fixing our subway tunnels, safety improvements at our airports, bridging the digital divide, or ensuring clean drinking water for all, this bill will rebuild and revive the Empire State’s infrastructure and create good paying jobs for communities that need it most,” he said.

“What does it mean?,” former Mayor Bill de Blasio said when the bill was approved. “It means more bike lanes. It means more green spaces, more resilient infrastructure, a fight against climate change. All of this combined in one piece of legislation. It's a miracle.”

At the time, Mayor Adams said he wanted federal infrastructure funds to go to the Second Avenue Subway expansion, to repairs to the Brooklyn-Queens Expressway and to the struggling New York City Housing Authority (NYCHA), and that he wanted to create a green bonds program to build green infrastructure. The infrastructure act, notably, did not include major funding for NYCHA or a significant investment in climate infrastructure, with Biden instead proposing both in his “Build Back Better Act,” which has stalled in the Senate.

Later, in January, during his first visit to Washington D.C. as mayor, Adams pushed for a “national urban agenda” and called for even more federal funding for housing, transportation, and climate infrastructure.

The new mayor has since released his $98.5 billion preliminary budget proposal with an accompanying $100 billion four-year capital plan. Most of both budget plans are holdovers from the de Blasio years, as Adams and his team have had limited time to put their fuller imprint on the two budgets and there are also simply many ongoing programs and projects that must continue to be funded. Both budgets will be negotiated with the City Council before their newer iterations are passed by the July 1 start of the city’s new fiscal year. Adams’ updated capital budget did not account for the influx of federal infrastructure dollars given it is still not fully clear how much New York City is getting and when, as there is a somewhat lengthy process involved.

The largest part of the city’s capital budget plan, about 34%, is pegged for infrastructure that includes transportation and mass transit ($16.8 billion), environmental protection ($14.8 billion), and sanitation ($2 billion). Another $17.2 billion is allocated to school construction, upgrades, and rehabilitation, $10.9 billion for housing, and the remaining $48.3 billion to broader government operations including $10.7 billion for courts, police and corrections, and $27.6 billion for parks, hospitals, libraries, and more.

At Tuesday’s oversight hearing, the City Council’s Committee on Transportation & Infrastructure and its Committee on Waterfronts and Resiliency will question officials from the Adams administration about the state of the city’s infrastructure and their plans for using the federal infrastructure funds. Representatives from the city’s Department of Transportation, Department of Environmental Protection, and Mayor's Office of Climate and Environmental justice are expected to testify, according to a spokesperson for Council Member Selvena Brooks-Powers, a Queens Democrat who chairs the transportation and infrastructure committee.

The spokesperson said the main focus of the hearing will be ensuring that federal funds are used equitably, particularly in neglected communities and through agencies that contract with Minority- and Women-Owned Business Enterprises (MWBEs). They will also focus on agency coordination, Council member priorities, transit infrastructure issues, and climate resilience projects to protect neighborhoods from flooding, the spokesperson said.

After this story was published, a spokesperson for Mayor Adams said city agencies and offices are coordinating with City Hall and the Office of Management and Budget to evaluate infrastructure priorities and corresponding federal funding streams. The administration is applying for each competitive grant under the infrastructure act that it is eligible for and working with the state, which directly receives the funds, to get its fair share of formula funding. The city is also focused on projects that improve safety, equity, resiliency, and sustainability, the spokesperson said, and is committed to environmental justice.

With federal funds expected to bolster city investments, government officials and urban experts say the administration should have “shovel-ready” projects lined up, to hasten construction and to quickly stimulate job creation. In the wake of the pandemic, which laid bare the city’s racial and socioeconomic inequities, and a rapidly worsening climate crisis, they recommend projects that will fix historical environmental injustices, improve public health, boost climate resiliency, and reduce greenhouse gas emissions.

“As the climate crisis demands both resiliency and mitigation, as aging infrastructure urgently requires a state of good repair and as building an inclusive economy requires a platform for a thriving future, it’s utterly urgent for us to pay really good strategic attention to our infrastructure,” said Comptroller Brad Lander, a Democrat, in a phone interview.

Lander echoed the need to have projects ready that can break ground as soon as possible but “with a long-term strategic eye on our infrastructure systems as a whole.” He said that beyond just building new projects, the city needs to update and improve its systems for assessing the state of good repair and for maintaining those projects over time. “We stood up some pieces of a Public Health Corps. We probably need a green neighborhoods corps that is maintaining the green infrastructure,” said Lander, who focused on problems in the city’s capital construction realm as a City Council member and has vowed to take that effort up a notch as comptroller.

Lander did praise the Adams administration for taking some steps on that front. He is part of the task force to reform the capital process being led by First Deputy Mayor Lorraine Grillo’s, which met for the first time last week – Lander was unable to attend, he said, but a representative from his office was present. “It's such a good moment to do that, because obviously, we can start to improve the timeliness and effectiveness of our capital projects management,” he said.

The Regional Plan Association, an urban policy think tank, said in a March report that state and local governments should try to access all the federal funds possible under the infrastructure act to focus on community investments and health equity. “If projects don’t align with health equity and environmental justice outcomes, they should be reevaluated,” the report reads.

It calls on officials to “heal past harms” through any new infrastructure projects. “Communities that were damaged by or denied the benefits of past highway, transit, water, waste treatment, and power infrastructure can benefit from projects that redress these deep, longstanding inequities,” it states. The report provides guidelines and case studies for achieving health equity through projects that include parks, mass transit, bridges, roads, highways, housing, and utilities.

The Center for an Urban Future, a think tank focused on economic opportunity and equity, has called for a massive public-works style program that will both fund necessary infrastructure projects and create thousands of jobs for a region that is recovering slower than the rest of the country. CUF has particularly focused on green infrastructure, sustainability and resiliency projects, and investments in natural open spaces.

“At a time when New York City is still down nearly 388,000 jobs from pre-pandemic levels, and unemployment is painfully high in many of the city’s lowest-income communities, investing in New York City’s natural areas now could spark thousands of new—and necessary—green jobs, while strengthening the city’s forests and wetlands for years to come,” wrote Eli Dvorkin, CUF’s editorial and policy director, in a March op-ed for Gotham Gazette.

Alex Heil, vice president for research at Citizens Budget Commission, a nonprofit fiscal watchdog, said it's important for the city to “not just look at projects in terms of what are the glitzy projects that seem good in a brochure or they appear good on paper, but actually look at some of the projects that are important to keep infrastructure functioning.”