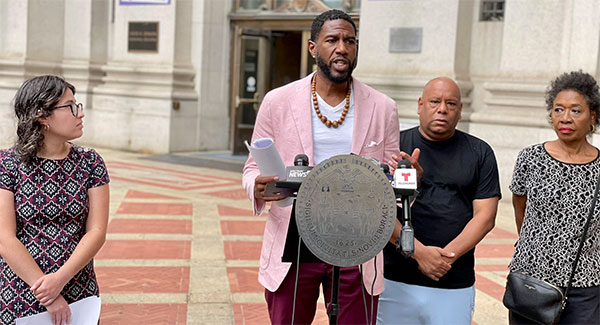 A coalition led by New York City Public Advocate Jumaane Williams has released a four-year roadmap to “ending homelessness as we know it,” proposing several strategies to help the roughly 55,000 unhoused people in the city move into stable, affordable housing.

Williams, a Democrat, released the new report alongside housing experts and individuals impacted by homelessness outside his Manhattan offices on Friday. He said that mayoral administrations have often focused on moving homeless people from the streets and subways into shelters, but that simply seeks to address the main publicly-visible symptom of the crisis. Meanwhile, the city has failed to address the central root causes: a lack of affordable housing and a broken bureaucracy.

As New York City tenants face the highest rent burdens in the nation, and with the pandemic eviction moratorium expired as of January, Williams called on other officials to heed the new 54-page report's proposals. Those include shifting the focus of homeless services and the shelter system to moving people to permanent housing as well as offering more housing subsidies, providing more robust social services to prevent eviction and housing loss, and making more affordable housing available across the board.

The new report comes from the “The Committee to End Homelessness by 2026,” which was convened in 2020 by the Public Advocate’s Office in partnership with housing specialists, activists, and directly-impacted individuals. Several of its recommendations are initiatives that Mayor Eric Adams, a first-year Democrat, included in his “housing blueprint” released in June.

The key findings of the Committee to End Homelessness’ report include that while people sometimes are successfully moved from the streets into shelters, they often struggle to either stick with those placements or find a way to leave shelter for housing. They regularly either bounce back onto the streets or spend exceedingly long periods of time in the shelters when they stay because of an ineffective bureaucracy and lack of housing options.

“The length of time people stay in city shelters is, on average, between 476 days and 773 days across the Department of Homeless Services’ three systems, leaving the shelters to function less like temporary shelter and more like long-term housing,” says the report, which also notes it is not easy to give an exact number of homeless people in the city.

There is the main city shelter system with about 50,000 people provided beds each night as of now, and then thousands more in different types of ancillary shelters and sleeping on the streets and subways. But the census has been increasing gradually since the end of the eviction moratorium, which helped bring the shelter population down by several thousand during the worst of the pandemic.

To place more of the shelter population in permanent housing, the report’s proposals include increasing funding for the “HomeBase prevention program,” which offers supportive services for people at risk of homelessness and reduces the average time people spend in shelters by nearly 23 nights, according to the report.

It also proposes improving and expanding access to federal Section 8 vouchers – which subsidize rents so low-income households don’t pay more than 30% of their income toward rent – and other rental assistance programs like Family Homelessness and Eviction Prevention (FHEPS) and CityFHEPS (New York City’s voucher program). These programs help subsidize rent for some low-income families facing housing insecurity or homelessness, but are plagued by bureaucratic hurdles that prevent them from helping many eligible applicants either at all or in a timely fashion — something Mayor Adams has said is a top priority for his administration.

The report also emphasizes the need to expand rent-regulated housing and provide other social services that prevent housing insecurity in the first place.

To create more permanent affordable housing, the committee supports converting more vacant hotels into affordable housing, increasing the stock of supportive housing, and offering more vacancies in NYCHA public housing to those experiencing homelessness. It also outlines support for the United for Housing campaign, which was launched last year by a large coalition to get mayoral candidates to commit to a robust, diversified, and well-funded housing platform — Mayor Adams agreed to it but has so far fallen short of its full commitments.

“All of these resources would allow the city to increase subsidized housing placements for people living in the city’s shelters,” the report says. “However, our scenario for getting the city to zero people in the Department of Homeless Services shelters calls for over 41,000 housing placements per year, nearly 30,000 more than are currently placed each year.”

It says that while there is a great deal the city can do, the plan would be more efficient and feasible with greater federal government support.

The report adds that if the city – which spends upwards of $4.2 billion annually on homeless services, including $3.4 billion on shelters –  implements its recommendations, it can not only reduce homelessness and promote human welfare, but expedite housing placement and save money overall.

The new report cites a study by RxHome NYC showing that it costs $46,000 more per year to host a family of three in a city shelter than to provide that family with affordable housing.

“The most effective solution to homelessness is to provide permanent, affordable housing, with support for those who need them,” the report states. “Shelters are necessary to rapidly respond to those who need immediate assistance, but New York City’s focus on expanding shelters rather than permanent housing has resulted in overcrowded shelters and a limited supply of affordable housing options.”

When she was Deputy Public Advocate for Housing Equity, Glover had the idea for convening this committee, part of fostering a real vision for ending homelessness after her decades in housing advocacy.

“When I came up with the idea of convening a committee to end homelessness, it was pretty much based on a very simple premise: it costs more money to house people in a shelter than to keep them in their own home,” Glover said Friday. “So the idea was, well, let's figure out how to keep people in their home so that they don't become homeless.”

“We are up against a crisis right now,” she added. “So what we need to do, is do everything that we can to protect the folks who are at risk of homelessness before it happens. Because all that happens is that they fall into a black hole.”

Williams, who just concluded a run for governor with a major focus on housing that he lost the Democratic primary to Governor Kathy Hochul, also emphasized the report’s recommendations to cultivate a more humane approach to the homelessness crisis. That includes by increasing privacy, staffing, on-site services, and food quality at shelters.

He cited a recent focus by the Adams administration on homeless “encampment sweeps” – where sanitation workers and police officers drive homeless communities from where they are camping – as evidence of inhumane treatment by the mayor. Williams said it is necessary to improve “deplorable” conditions in shelters and to send more trained mental health professionals, rather than police officers, to respond to calls involving homeless individuals.

“We're in a moment when the homelessness crisis is worsening, a wave of pending evictions threatens to worsen it, and homeless individuals are being targeted, demonized, and dehumanized,” Williams said as he announced the report. “It’s incumbent on us to protect unhoused New Yorkers and ensure their swift transition out of shelters into permanent housing. Right now, as encampment sweeps continue in the five boroughs, the city’s doing this out of order.You can’t just tell homeless people to leave public spaces without having enough safe places for them to go. We have the tools to end homelessness as we know it in New York City by 2026, but we need the political will to prioritize truly helping unhoused New Yorkers, not just pushing them out of sight.”

In early 2020, there were nearly 80,000 unhoused people in New York City, the highest number in the city’s history, the report says. That population is now around 55,000-60,000. The majority of those in shelters are men, women, and families of color – the largest share of whom are Black – who have come from historically redlined neighborhoods “that this city has neglected with its education, environmental, health, and housing dollars,” the report says.

“Instead of centering the needs to provide safe, supportive, deeply affordable housing, people are being treated as a nuisance, sometimes something to be ignored, or even removed,” said Williams. “We have to make sure that we have the services in place [to house people] before we push them away. Our shelters are not equipped to swiftly transition New Yorkers to permanent housing.”

That is one point among several involved where Williams and Adams agree – the mayor’s recently-released “housing blueprint” includes a focus on both moving people out of shelter and into housing much more quickly and building more affordable housing, including supportive housing that has on-site social services.

To prevent evictions, Williams voiced his support for increased funding for legal assistance, which is included in the report, particularly as housing courts have suffered from a shortage of attorneys to implement the city’s landmark right to counsel law. And the public advocate endorsed legislative recommendations included in the report, including the creation of a “homeless bill of rights,” which would be provided to people experiencing homelessness to show them what rights and services are available to them.

But Williams stressed that the most critical way to prevent evictions and the homelessness they lead to is to pass the “good cause” eviction bill through the State Legislature, which would set strict limits on annual rent increases and provide significant eviction protections across the board at all rental housing in the state. It was one of the main policies Williams ran on in his gubernatorial campaign and will surely be a focus for progressive activists and elected officials in the next state legislative session starting in January.

Alongside Williams and Glover to announce the report, released at the end of Homelessness Rights Month, were several advocates and members of the Committee to End Homelessness by 2026. They included Shams DaBaron, a committee member, a homeless rights advocate, and formerly homeless individual who has become a key ally of Mayor Adams; and Sara Newman, director of organizing at the Open Hearts Initiative, which seeks to support people experiencing homelessness and pursue solutions to the crisis.

Williams was set to join DaBaron and other directly-impacted people, activists, and others at the “Homeless Rights Month Sleep Out” on Saturday, where some spent the night at 119th Street and Morningside Avenue in Manhattan as part of a larger event to raise awareness of the challenges homeless people face.

Mayor Adams made an appearance at the event to show his support and solidarity, something participants at Friday’s report release had mentioned was a possibility based on their conversations with City Hall.

“This report gives a real blueprint and roadmap built by the people who are working on this issue,” Williams said. “We're hoping the [mayoral] administration will take it seriously. And really put some energy and resources into making that happen.”