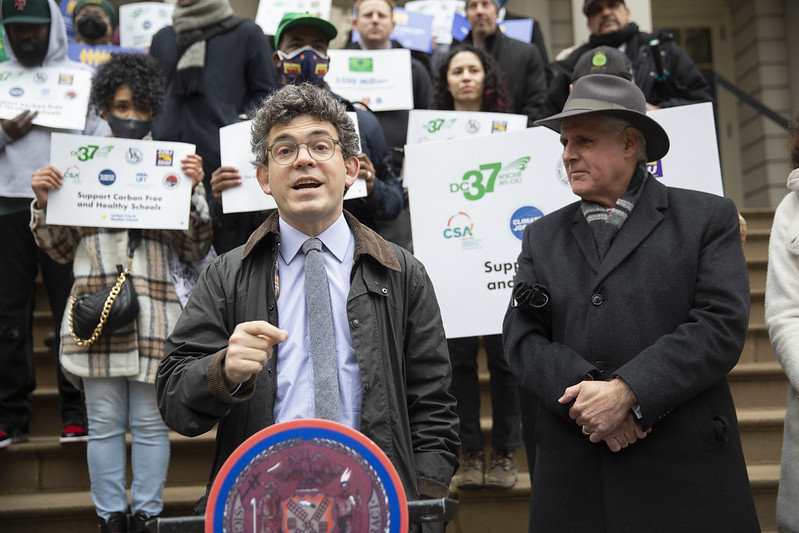 The New York City Council is calling on Governor Kathy Hochul, the State Legislature, and other environmental leaders to strongly consider New York City as they plan and implement the next phases of the state’s sweeping climate agenda.

In a resolution adopted Wednesday the Council is urging the state to allocate New York City its "fair share" of funding from the $4.2 billion Environmental Bond Act voters approved last month — going as far as to say the city should receive a proportion of bond act spending equal to its share of the state's tax base. A second resolution calls on the state Climate Action Council to draft, and Hochul to implement, a roadmap to help the state meet its ambitious climate goals while addressing a host of considerations, including the city's own environmental targets.

"Unfortunately when it comes to the equitable allocation of funds to New York City's environment and environmental justice communities, the state has been far less than fair to New York City in the past. From the 1996 environmental bond act to the present," said Council Member James Gennaro, who chairs the Council's Committee on Environmental Protection and sponsored the bond act resolution, at a committee hearing ahead of the full-body vote.

"As a former DEC deputy commissioner for New York City sustainability and resiliency from 2014 to 2020, I saw firsthand how New York City got short-changed with regard to critical environmental funding," he said. "That's why I resigned that job to run for Council again. Well I'm back and I intend to advocate for fair share of environmental funding for the city, hence this resolution on the bond act."

The Environmental Bond Act authorizes the state comptroller to issue up to $4.2 billion in general obligation debt for projects related to climate change, flood mitigation, clean water infrastructure, and land conservation. More than a third of the total spending must go to communities that have borne the brunt of environmental impacts, which are predominantly poor constituencies of color that experience higher rates of pollution, among other ills.

The bond act, passed by Hochul and the Legislature to put before voters, is seen as an important step in the state's efforts to adapt to climate change and also achieve carbon emission targets enshrined in the 2019 Climate Leadership and Community Protection Act (CLCPA). The governor and the State Legislature will begin selecting the projects to be funded by the bonding during the budget process next year, though there are a number of requirements included in the act. The money will likely be allocated over years or even decades (a small amount of funds are still being spent from a smaller environmental bond act from 1996, the last such bond act in New York).

According to a spokesperson for Hochul, the governor has convened an inter-agency workgroup to identify funding needs across the state.

"The Administration looks forward to sharing more details shortly and advancing this once-in-a-generation opportunity to safeguard clean drinking water and modernize our infrastructure," the spokesperson wrote in an email to Gotham Gazette in response to the resolutions. "Governor Hochul also recognizes all of the hard and diligent work of the Climate Action Council and looks forward to reviewing the Final Scoping Plan. Once the Scoping Plan is delivered to the Governor, the administration will review and engage with all relevant parties as we continue to work towards our CLCPA goals."

In January, Hochul will release an Executive Budget and State of the State agenda that will shape a great deal of state government activity in 2023.

Gennaro's resolution, which the City Council approved along with several pieces of legislation and commission appointments Wednesday, calls on Hochul to allocate to the city funding raised through bonding "in a manner that is commensurate with the city's contribution to statewide tax revenue."

New York City accounts for close to 43% of the state population and makes up 62% of its tax base, according to the resolution. As the tax revenue generated in the city will be paying off the bulk of the debt service on the bonds, the city should receive the bulk of its spending, Gennaro argued.

"New York City residents are going to pay back most of this $4.2 billion," Gennaro told Gotham Gazette ahead of the hearing vote on the resolutions, which prefaced full Council passage. "We should get something that comes close to fair share."

But New York isn't just the single-largest tax base. It is also home to some of the worst polluters and climate-related public health issues, and its long shorelines make it particularly vulnerable to extreme weather.

"There's only so much you can put in a resolution. You can't write a book on all kinds of history or whatever," Gennaro said of the decision to tie the bond spending to tax revenue in the resolution.

In particular, the climate-change spending, which includes projects like methane reduction and renewable energy and efficiency upgrades, will help the state reach CLCPA goals. Those include reducing carbon emissions by 40% of 1990 levels by the end of the decade and by 85% by 2050. The CLCPA targeted 70% of electricity to be generated by renewable sources by 2030 and 100% by 2040. A total of 40% of spending under CLCPA must go to underserved communities.

The second Council resolution adopted Wednesday calls on the Climate Action Council – a body established through the CLCPA to guide the state's carbon-neutrality efforts – to release a final Scoping Plan that aligns with the city's 2019 Climate Mobilization Act, which set emissions goals for large buildings, one of the greatest contributors to greenhouse gas emissions.

"I'm really excited for us to achieve those ambitious [CLCPA] goals but we're waiting for the specifics," said Council Member Lincoln Restler, who sponsored the resolution, at the committee hearing Wednesday.

"Our resolution provides some very clear direction for what our expectations are of the Climate Action Council for how we can boldly reduce our carbon emissions," he said.

At the center of the city's Climate Mobilization Act is Local Law 97, which limits emissions from large buildings, and Local Laws 92 and 94, which require solar and green roofs on new buildings. The resolution passed Wednesday calls for the Scoping Plan to include recommendations for mass building electrification, energy efficiency upgrades, and retrofitting. The recommendations should support the full electrification of all new buildings starting in 2024, the resolution states.

Through the resolution, the Council also calls for "equitable access" to geothermal heat pumps, a moratorium on new and repowered fossil fuel plants, and investments in offshore wind and solar power, battery storage and transmission line upgrades.

The Climate Action Council – which is made up of representatives from numerous state agencies, public authorities, labor unions, and advocacy groups, and co-chaired by the heads of the New York State Energy Research and Development Authority and State Department of Environmental Conservation (DEC) (both gubernatorial appointees) – will have its last meeting of the year on December 19, when it is expected to vote on the final scoping plan, according to DEC spokesperson Haley Viccaro. The plan is due January 1.

"The Climate Action Council has been working hard over the last two years to finalize a Scoping Plan that will act as New York’s roadmap to meet our aggressive climate targets and reduce harmful greenhouse gas emissions, while transitioning our economy to one that embraces renewable energy, and ensuring that all communities benefit equitably as part of a just transition," Viccaro wrote in an email to Gotham Gazette in response to the City Council resolution. The plan is "focused on promoting equity and climate justice, ensuring that the state’s climate investments reach communities that have long borne the brunt of pollution for decades," she said.

During her tenure as governor since August 2021, Hochul has announced many clean energy projects that are part of the pathway to meet the CLCPA mandates and will be featured in the Climate Action Council’s final plan. But members of the Council have also been wrestling with many other key issues, including building electrification requirements, funding mechanisms, and others.