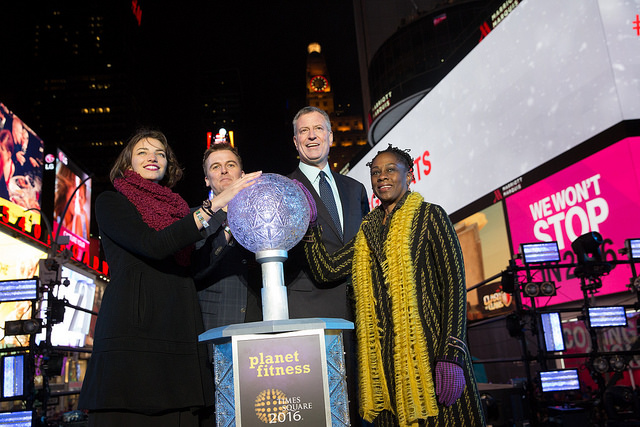 As we usually do around this time of year, Gotham Gazette asked New York politicos to look into their crystal balls for predictions for the year ahead. Below you'll find insights from elected officials, journalists, advocates, analysts, and others who are tuned in to New York politics.

We know that 2017 will be interesting given it’s a city election year, and there’s always plenty of action in Albany, where the focus will be as the year begins. But what *exactly* will happen? Read below for some ideas.

Looking back at last year's predictions for this year, some of our forecasters did quite well (see Kathy Wylde, Alyssa Katz, Michael Benjamin, and others); while others missed the mark (see Jeff Smith, Luis Sepulveda, and others); and a few had mixed results (see Carol Kellerman and Doug Muzzio).

Wylde predicted that the City Council would pass the mayor’s mandatory inclusionary housing plan, and was right; Katz predicted that 421-a would flounder and that either Bill Bratton or Carmen Fariña would depart city government, and was right; and Benjamin predicted that neither Andrew Cuomo nor Bill de Blasio would be the Democrats’ vice presidential nominee, and was right. Meanwhile, Smith predicted that Keith Wright would succeed Charles Rangel; Assemblymember Sepulveda predicted ‘raise the age’ would become a reality; and Muzzio predicted that Michael Bloomberg would make another mayoral run - none of which came true. Muzzio was right, though, that Preet Bharara would keep the indictiments coming, just not for Gov. Cuomo.

See a new round of political predictions, these for 2017, below.

***Have something to add to the conversation? Tweet us @GothamGazette***And, be sure to read the latest reporting from Gotham Gazette; including our look back at The Top Ten Stories of 2016 in New York Politics and much more.***

PREDICTIONS for 2017 in NEW YORK POLITICS:

Carol Kellermann, executive director, Citizens Budget Commission
-The City misses the opportunity to save money on city infrastructure projects as the state legislature again does not extend design-build authority to NYC.
-The City finally acknowledges that taxi medallions aren’t worth what they used to be and removes $700 million+ in projected revenue from their sale from its financial plan.
-After spending millions to launch the program, the City closes down the IDNYC program because Trump-induced fears cause undocumented immigrants to cease participating.

Jonathan Bowles, executive director, Center for an Urban Future
-Frustration with overcrowded trains and mounting subway delays boils over, making the state of the transit system a big quality of life issue in the 2017 mayoral election.
-After several years of unprecedented economic growth, NYC’s economy starts to slide in the second half of the year, but too late to have a big impact on the election.
-CUNY becomes the latest flashpoint in the Cuomo/de Blasio feud, with the mayor pointing out that CUNY is a key launchpad for economic mobility in today’s economy and needs more state support.

Dr. Christina Greer, political science professor, Fordham University, and author of Black Ethnics
-Bill de Blasio will win reelection and continue as the 109th Mayor of NYC
-The Bdb-Cuomo beef now becomes a triangular set of fights with President Trump, his new role as president, and the expenditures incurred by NYC and NYS.
-The Second Ave subway line will continue to be a money pit, providing service at only three stations in upper Manhattan.

Michael Benjamin, editorial board, The New York Post
-Governor Andrew Cuomo finally learns the lesson his predecessors learned: the Assembly and Senate leaders are better at playing the long game than governors, especially those whose feet of clay get exposed.
-A dark horse candidate rides onto the NYC political scene to make Mayor de Blasio the one-term Mayor he has feared becoming.
-Carl Paladino finally gets the professional help he has long denied.

City Council Member Laurie Cumbo
More people will become engaged in social justice issues than ever before, in part fueled by a new generation of young activists.

City Council Member Carlos Menchaca
-New York City lives up to its history as our unique mix of patriotism and chutzpah lead the nation to triumph over dangerous demagoguery.
-After a first few chilly hours at an original Gilmore Girls marathon, Andrew and Bill finally realize the whole thing was just a silly misunderstanding.

Dick Dadey, executive director, Citizens Union
-At the ballot box in November 2017, New Yorkers will vote to hold a state constitutional convention. After a year where citizen confidence in how our democracy functions dropped even further, in part shown in the movements behind Bernie Sanders and Donald Trump, an unexpected citizen uprising will forcefully emerge in New York in 2017, manifesting itself as New Yorkers vote for holding the first citizen-called state convention since 1937.
-Buoyed by still more political corruption charges by U.S. Attorney Preet Bharara, the rising view that the state’s political institutions are not operating transparently or fairly enough will push New Yorkers to vote to take back our democracy, sending shockwaves across the state as broad democratic reform will now be possible.

David Bloomfield, professor of education, Brooklyn College and CUNY Graduate Center
-The day after Mayor de Blasio's re-election, Chancellor Carmen Fariña resigns and, in a surprise move, is replaced by out-of-work ex-Secretary of Education John King who turns his back on his past advocacy of testing and charters to focus on desegregating New York City public schools.
-King hires Daily News reporter Ben Chapman as his top press aide after the News, in further retrenchment, joins the NY Post in devoting its entire education beat to reprinting press releases from Families for Excellent Schools.
-In Washington, the Republican-led Congress aided by renegade Democratic senators, severely cuts back on Title I aid to cities, creating massive out-migration of students to federally supported charter, private, and for profit cyber-schools.

Evan Siegfried, Republican strategist & author of GOP GPS
-Preet Bharara will finish out 2017 as U.S. Attorney for the Southern District, while hearing "pleas" to run for Governor and clean the cesspool of Albany.
-Mayor de Blasio runs on the slogan: 'De Blasio, the Mayor with the guts to kill the animals.'

Evan Thies, Democratic strategist & founder of Pythia public relations
-The 2017 mayoral election becomes about who hates de Blasio the most on the Republican side and who hates Trump the most on the Democratic side.
-Senator Gillibrand emerges as one of the Democrats' most vocal and effective voices against the Trump administration.
-Cuomo and de Blasio duel in Weehawken, N.J. Both miss, hitting and seriously wounding New York taxpayers. Lin-Manuel Miranda writes a play about it.

Heath Brown, professor, City University of New York, John Jay College
Immigrant voters will emerge as an even more powerful force in the 2017 mayoral election than they have in the past. Organizations representing immigrants will feature prominently in shaping the agenda of the campaign especially on how New York City will react to new immigration policies coming from Washington. The candidate that can get ahead of this issue will win in 2017.

James Parrott, deputy director and chief economist, Fiscal Policy Institute
-As a hedge against likely reductions in federal aid coming to New York, Albany will extend the millionaire’s tax with some of the increased revenues being used to increase general purpose aid to localities (except for NYC, of course) for the first time in six years.
-Recognizing that the sky didn’t fall in the wake of the largest minimum wage increase in New York City in 60 years, many employers start to invest in raising the skills of their lowest-paid workers as they contemplate another increase at the end of 2017.
-After repeated stock market gyrations triggered by bizarre late-night tweets, Carl Icahn and the ex-Wall Streeters and generals on the White House staff ask Twitter’s Jack Dorsey to engineer a 5-minute delay for the President’s Twitter messages to allow Ivanka and Jared time to screen outgoing tweets.

Jeff Foreman, director of policy, Care for the Homeless
-The City Council will fund a right to counsel in housing court in the 2017-18 budget, jumpstarting a major national movement for right to counsel for tenants facing eviction.
-New York State will fund its commitment for supportive housing this year, with no strings (or MOUs) attached, and consider Assemblymember Andrew Hevesi's modernized rental subsidy plan.
-Advocates and others more fully begin to realize just how important and innovative NYC's "HomeStat" street outreach program is, as street homelessness begins to decline.
-New York advocates and policy-makers will be leaders in a burgeoning national effort that will activate the progressive movement in defense of health care, housing, education and food security measures for very low-income people and those in poverty and to protect people of color, immigrants, and others who feel under attack in the new year.

Theodore Hamm, professor and editor of Frederick Douglass in Brooklyn, which comes out in January.
-Carl Paladino will be named Director of Strategic Outreach by Trump's Alt-White House.
-The grandeur of the fourth new station of the 2nd Avenue subway will far exceed that of the first three.
-Bill de Blasio will spend lots of time at the Park Slope Y.

Alex Vitale, professor of sociology, Brooklyn College
-This is the year that de Blasio starts to look a lot like Bloomberg. Major fiscal pressure brought on by Trump-driven cuts to federal spending, declining real estate activity, and financial retrenchment on Wall Street drive de Blasio to clamp down on spending, creating disaffection among core constituencies. He will not use this as an opportunity for progressive tax reform, which could alleviate the need for austerity.
-De Blasio will also maintain his core allegiance to Broken Windows policing, undermining his support in African-American communities and possibly contributing to one or more high profile acts of police abuse.
-Little additional progress will be made on reducing the Rikers population or the number of warrants issued in connection with minor crimes and summonses.

WE’LL SEE WHICH OF THESE PREDICTIONS AND WHAT ELSE HAPPENS IN 2017 -- STAY WITH GOTHAM GAZETTE AS WE TAKE YOU THROUGH THE POLITICS OF THE NEW YEAR.

Contact us anytime by tweeting @GothamGazette; you can email editor Ben Max at This email address is being protected from spambots. You need JavaScript enabled to view it.; and don't forget to sign up for our newsletter if you haven't yet or to spread the word to friends and colleagues if you have!