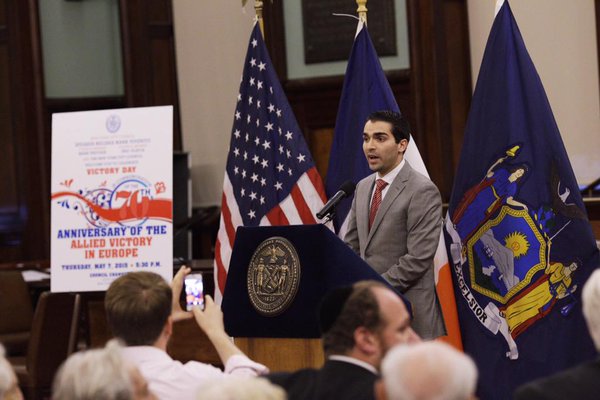 The City Council Committee on Veterans held a preliminary budget hearing Monday, hearing testimony from the Department of Veterans Services and advocates for military veterans in New York City.

Council members, led by committee Chair Eric Ulrich, heard from Loree Sutton, the commissioner of the Department of Veterans Services, and others in assessing the department’s budgetary needs for the upcoming 2018 fiscal year, which begins July 1.

Formerly the Mayor’s Office of Veteran’s Affairs, DVS was established as a stand-alone agency in 2015 to provide more support for the city’s military veteran community. This includes more staff and a bigger budget, as well as more oversight from the Council.

Mayor Bill de Blasio’s $84.67 billion preliminary budget, unveiled January 24, surprised some veterans advocates with its $318,000 funding decrease for DVS from the current fiscal year’s adopted budget. As previously reported by Gotham Gazette, this proposal was initially met with outrage from members of the Council’s veterans committee and other elected officials, who joined veterans advocates to protest the proposed reduction outside City Hall last month.

A few days later, the mayor’s office announced it was adding money to the DVS budget for fiscal 2018 to keep one position that had been federally funded and was not slated to be kept and for other services.

Thus, outrage was largely absent from Monday’s hearing. Despite DVS receiving $3.84 million in the adopted budget for the current fiscal year, Commissioner Sutton and Council Member Ulrich seemed at peace with the $3.63 million (plus the to-be-seen additions) in proposed funding for DVS in fiscal year 2018. The city's November budget modification had the DVS budget at $3.95 million, but projected $3.63 million for the next fiscal year, and that is what de Blasio wound up budgeting. State and federal funding may also play a role in the next adopted DVS budget, though.

In her testimony, Sutton framed the decrease as a natural reduction for a second-year agency. Referring to DVS as “truly a ‘start-up’ entity,” Sutton explained that the budget decrease is due to one-time costs associated with forming a new agency that were included for the current year and are unnecessary next year. “Part of the inaugural agency budget was assigned to staffing, as well as certain non-recurring start-up costs such as the purchase of computers, office equipment, supplies, and furniture.”

Following Sutton’s testimony, Ulrich praised Sutton for keeping operational costs down. “Commissioner Sutton is probably one of the few agency heads who doesn’t come to the City Council saying ‘we need more money,’ so I’m very impressed with her level of austerity - she’s doing so much with the limited resources she has. If she needed more money I’m sure she would ask for it and the Council would be obliged to give it to [DVS].”

Sutton’s testimony also provided an overview of DVS operations. She outlined the progress made on housing, health services, and employment programs for the city’s 210,000 military veterans. According to Sutton, DVS “led the nation in its response to homelessness by connecting 1,600 homeless veterans with permanent, affordable housing this past year.” Sutton also reported that, in an effort to increase accessibility, DVS is establishing satellite offices in all five boroughs “to serve as a direct link between the community in each borough and DVS.”

A DVS spokesperson, Alexis Wichowski, had previously told Gotham Gazette that the agency had hired 33 of its 35-person budgeted staff. “We are almost at full capacity, that’s a huge milestone,” she said. “Getting people on board and getting them trained has been the focus for the last few months.”

Though neither Sutton nor Ulrich called the mayor’s preliminary budget lacking in DVS funding, that position was not unanimous Monday. The committee also heard from the NYC Veterans Alliance, represented by Kristen Rouse, who testified to the need for an increase in DVS funding, arguing that her organization is still overwhelmed with the number of requests it receives from veterans and their families.

“I would love for a day when we don’t get phone calls and emails from distressed people saying ‘we need help,’” Rouse said, before officially calling on the administration to increase DVS funding. “DVS was created because of the enormity of the need and the urgency of helping veterans and their families in New York City...Funding must go up, not be reduced,” Rouse told the committee.

Though Ulrich could not commit to securing such an increase in the final budget - the deadline for which is June 30 - he did conclude the hearing by remarking that DVS represents a vast improvement to the city’s former veteran care and policy-making process. It was a push by Ulrich and groundswell in the Council that led to the creation of the department over the initial objections of de Blasio. “Prior to DVS...The budget [for veterans affairs] was whatever the Mayor wanted it to be and the Council really had no formal role it that process...I think it was incredibly important that people feel a sense of accountability. Now we have that and we’re very grateful for that.”

Note: this article has been updated with additional information.