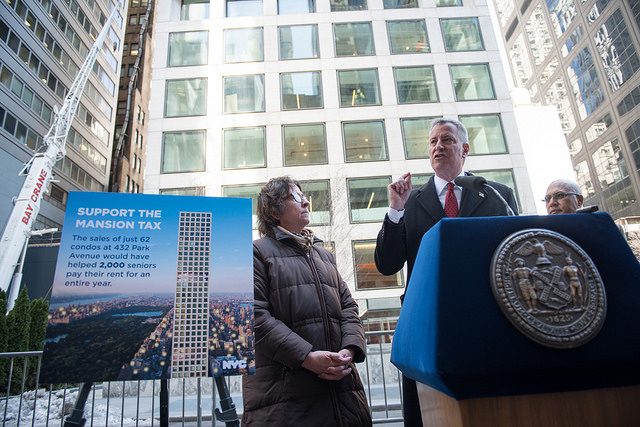 Budget watchdogs have expressed concern that Mayor Bill de Blasio’s “mansion tax” proposal, which would impose levies on real estate transactions above $2 million, may be misguided or even unnecessary.

De Blasio made a last-minute trip to Albany on Wednesday to rally with Democratic lawmakers and progressive advocates in favor of a number of proposals currently being considered in state budget negotiations. The mayor’s chief concern, however, was the mansion tax, a proposal he has floated for years and revived this budget season as a tool to subsidize affordable housing for seniors.

The proposal would impose a 2.5 percent tax on buyers who purchase property in the city at more than $2 million, raising an estimated $336 million next year, according to the mayor. That funding would then be used for a new Elder Rent Assistance program to provide $1,300 in monthly assistance to 25,000 seniors, the mayor said at his State of the City speech in February. In order to implement the tax, the city needs state approval, which is unlikely given opposition to new taxes from the Republican majority in the state Senate as well as Governor Andrew Cuomo, a Democrat who is fiscally moderate and habitually opposed to de Blasio proposals.

The Wednesday rally at the state Capitol was one stop in something of a barnstorm by de Blasio, who has been pushing the mansion tax plan among seniors, including at two senior center stops on Thursday. The mayor has cited the necessity of the tax revenue to provide the additional rent subsidies to older New Yorkers who fit certain age and income guidelines.

But fiscal experts question whether the city really needs a new tax to raise that revenue and, if so, whether a transactional tax is the best way to do it.

“This could be a good idea in the context of general property tax reform and other tax reform,” said Nicole Gelinas, senior fellow at the Manhattan Institute, a conservative think tank. “But it's not a good idea as a revenue raiser."

Gelinas noted that the city already charges a mortgage tax, which she called “a tax on people who can't pay cash for an apartment.” “If we wanted to have a more progressive tax on just the purchase of more expensive properties, the money should go to reducing or eliminating mortgage taxes or other property taxes," she added.

That’s not what the mayor is proposing. Instead, Gelinas pointed out, de Blasio is attempting to raise revenue for a new program through a new tax, something mayors don’t usually do unless they face a sharp revenue crunch. “The city is not exactly starved for revenue right now,” she said.

Although the city is feeling the early effects of an economic slowdown, revenues and reserves are still robust after years of sustained growth. Available monies could be used to prioritize affordable senior housing, Gelinas said. Yet, as he once did with his universal pre-kindergarten program, de Blasio is insisting that the way to fund his senior assistance program is through a new tax.

The mansion tax also faces opposition at home from allies of de Blasio. Manhattan Borough President Gale Brewer told Gotham Gazette that she opposes the $2 million threshold for the tax since it would have an outsize impact in Manhattan, where property prices are far greater than the other boroughs. She would prefer a $5 million threshold. “Manhattan should not be the cash cow for the rest of the boroughs,” she said last month.

A report by the nonpartisan Independent Budget Office, prompted by Brewer, looked at property sales from the last three years and found that between 2014 and 2016, 8 percent of homes sold citywide were priced at $2 million or more. Of those, 86 percent were in Manhattan.

In response, the de Blasio administration points out that it is a “marginal tax for incremental sales price over $2 million,” meaning that only the price above the $2 million would be taxed at the 2.5 percent. Those purchasing homes closer to the $2 million threshold would be paying very little in added tax.

There are also concerns among the real estate industry about the proposal’s effect on sales, at a time when Brooklyn brownstones can cross the $2 million threshold. The de Blasio administration dismisses that concern due to the incremental nature of the tax.

Carol Kellerman, president of the nonpartisan Citizens Budget Commission, believes the mayor hasn’t made a clear case for the mansion tax. “If the goal is to impose higher taxes on people perceived to be wealthy, there are ways to do it through the income tax structure,” she said in a phone interview. “The mayor’s not proposing this as a form of budget relief or as necessary for budget needs.”

Kellerman also emphasized the “volatile” nature of a transactional tax, which would depend on the ups and downs of the real estate industry and also have a “distortive impact” on the market and change behavior. “If there’s a need to raise that amount of revenue, a transfer tax of this nature is not a reliable source of revenue,” she said.

She also pointed out that the mayor has already allocated billions in the city’s capital plan for affordable housing, so the need for a separate tax for senior housing doesn’t necessarily pass muster.

Given opposition from state Senate Republicans, the mansion tax may be dead on arrival in Albany. De Blasio has argued, including in Albany Wednesday, that he’s heard that before about proposals, such as the $15 minimum wage. Gelinas was blunt about mansion tax prospects. "I don't think it's going to go anywhere," she said.

A spokesperson for the de Blasio administration refuted both Gelinas and Kellerman’s concerns, stressing that property tax reform is a larger undertaking and that the mansion tax is necessary when considering how the proposed federal budget will impact affordable housing and seniors in particular.

The spokesperson also pointed out New York’s existing state mansion tax, which is 1 percent for properties above $1 million, and cited jurisdictions around the world that have used similar taxes to fund policy goals from rising housing markets.

A spokesperson for another budget watchdog, city Comptroller Scott Stringer, declined to comment on the mansion tax proposal. The comptroller has not released any fiscal analysis of the proposal.

At the Wednesday rally in Albany, de Blasio reiterated the need for the mansion tax. “Here’s the bottom line, right now, there are seniors struggling to get by in New York City and all over New York State,” he said. “There are seniors struggling to get by because so many of them are on fixed incomes. So many of them don’t have a way to get more income but the cost of housing keeps going up...We owe it to them to get it right, and asking the wealthy to pay their fair share so our seniors can have decent life is a thing we call common sense.”