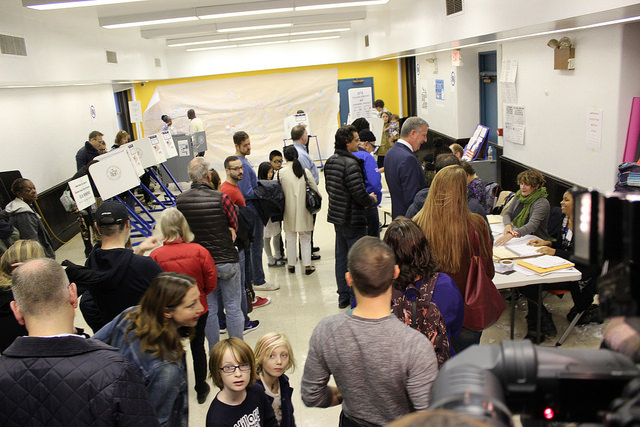 New York City has roughly 6.6 million residents of voting age but only about 4.99 million registered voters, according to rough estimates from the American Community Survey and the state Board of Elections. The city’s municipal primary election is a little over a month away, on September 12, and the deadline to register to vote is approaching fast. New Yorkers have until August 18, next Friday, to register if they wish to vote in the primary. For the November 7 general election, the registration deadline is October 13.

New York holds “closed” primaries, meaning that only voters registered with a party can vote in that party’s primary. Unfortunately for those registered voters who may want to switch their party registration ahead of a primary -- which often matters significantly more in a city where Democrats outnumber Republicans 6-to-1 -- the deadline for switching party registration passed in October last year. In the April 2016 presidential primary, many New Yorkers who were unaffiliated with any party were shocked to find that they could not vote as the deadline for selecting a party for that election had passed six months before primary day.

These harsh deadlines, and the state’s voting and electoral laws at large, have been the subject of significant criticism from elected officials and government reform advocates who argue that the state needs to rapidly modernize its laws. New York is one of only 12 states in the country that does not allow no-excuse early voting; the state also does not provide for automatic or same-day voting registration or electronic poll books.

“In our antiquated voting system, New Yorkers need to register 25 days before they actually vote, which is another deadline that they need to keep in mind when participating in our democracy,” said Dick Dadey, executive director of Citizens Union, a good government advocacy group. “Having such a 25-day waiting period between registering and voting is a throwback to a time when there were no computers and that’s why we need to update our voting laws to allow for registration and voting to actually occur on the same day.”

While elected officials have generally acknowledged the flawed election process in the state, there has been little concerted action. In January, Governor Andrew Cuomo announced a legislative package known as the “Democracy Project” intended to modernize elections. The package included such reforms as early voting, automatic voter registration, and same-day voter registration. However, Cuomo was largely silent on the issue and voting and electoral reform were ultimately left out of the state budget passed in April.

Mayor Bill de Blasio also promised an aggressive push for electoral reform before the end of the legislative session in Albany this year, but only followed through with two telephone town halls. The mayor has supported a slate of voting reforms including same-day registration, early voting, keeping electronic poll books, consolidating federal, state, and local primaries into a single-day primary, reformatting ballots, and pre-registration for 16- and 17-year-olds. De Blasio does not, however, support a system of open primaries, contending that “parties mean something” and non-members shouldn’t vote in a primary.

Dadey believes that the governor’s actions, while laudable, were not sufficient reforms. “It’s trying to make lemonade out of lemons that have gone bad,” he said, “but what we really need to do is get a voting system that makes voting as easy as possible in New York state because right now, New York State makes it so difficult...to register and to vote, that New York is really a passive voter suppression state.”

New Yorkers can check their voter registration status via the Board of Elections here, and check all registration and voting deadlines here.