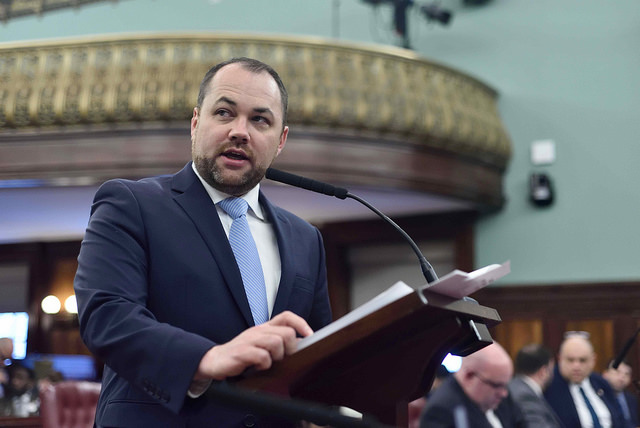 City Council Speaker Corey Johnson said last week that the Council would forge ahead with legislation to create a Charter Revision Commission to review the broad structure of city government, bucking Mayor Bill de Blasio’s intention to unilaterally create a commission meant to explore campaign finance and electoral reforms. And Johnson’s support of the bill -- first proposed in December by Public Advocate Letitia James and Manhattan Borough President Gale Brewer -- also came with one significant change to its language. Instead of the commission members electing a chair and vice chair from among themselves, the speaker would get to appoint the head of the commission.

The original James-Brewer bill was introduced amid a frenzy of other activity on the last day of the 2014-2017 session of the City Council and, just two months later, was undercut by de Blasio’s announcement in his State of the City address that he would convene his own commission. The mayor said that he would solicit input from others, but that he would appoint all the commission members, exercising his executive prerogative.

The original version of the bill proposed that the commission would get to choose one of its members to lead it through the process of examining, debating, and reimagining the charter, effectively the city’s constitution. The process takes months at the minimum, depending on the scope of the commission’s review, and its proposals are put to the voters on the ballot.

The amended version of the bill, on which Johnson was added as a lead co-sponsor along with James and Brewer, contains the change giving him more power. “The speaker of the city council shall appoint from among the membership a chairperson,” it states.

Joseph Viteritti, a professor at Hunter College who was research director for the Charter Revision Commission convened by former Mayor Michael Bloomberg in 2010, said the change “certainly makes the Speaker a more important player in this.”

“A very important function of the chair is to select the staff of the commission, the executive director, and the research director,” Viteritti said, pointing out that much of the work is driven by those staffers. “From a working point of view, I think it is significant...That’s what drives the process in the end.”

Jennifer Fermino, a spokesperson for Johnson, maintained that the change in the bill was not noteworthy. “The structure of the commission remains unchanged. The sponsors of the bill agreed that having a chair appointed by the Speaker would make the process of setting up the Commission more efficient, as it has for past Commissions. The Chair can accept space and initial staff which will enable the Commission to get to work more quickly,” Fermino said in a statement.

Spokespeople for James and Brewer did not provide comment for this article. A mayoral spokesperson declined to comment.

Viteritti did note that any commission, whether created by the legislative branch or the executive, is virtually unhindered in scope and can choose to explore any section of the charter its members deem necessary. Both camps proposing a commission -- the mayor on one side and the council speaker, public advocate and Manhattan borough president on the other -- have made clear the issues they want to pursue, however.

De Blasio was more direct, stating in his February 13 State of the City speech that he would appoint a commission and “give it the mandate” to propose changes to campaign finance law, reducing the influence of wealthy donors in elections, as well as empower the city government to handle responsibilities currently entrusted to the Board of Elections, a quasi-state agency.

Johnson is hoping for a broader assessment of city government, without any “pre-baked” ideas and proposals, and not including proposals that fall under the Council’s legislative authority, such as campaign finance reform. “A Charter Revision Commission should look at things that are structural in the governance of New York City,” he said when asked by Gotham Gazette, at an unrelated news conference last week, two days before The New York Times report.

Among the ideas he floated -- some of which have been supported by James and Brewer as well -- are independent budgeting for the offices of the public advocate, the borough presidents, the comptroller and community boards; an “advise-and-consent” role for the Council on additional mayoral appointees and nominations; examining changes to the city’s land use process and units of appropriation as part of the budget process.

“Those are things that we at the Council cannot legislate,” Johnson added. “They’re in the City Charter, they go to the structure of city government and we can’t legislate them. The issues that the mayor put forward, while they may be worthy issues, they’re not issues that the public needs to vote on as part of a Charter Revision Commission. The council could legislate those items.”

The Council bill is set to be heard by the Council’s Committee on Governmental Operations on Friday.

“You never can entirely predict where a commission is going to go,” Viteritti said. “If you know where you’re going before you get there, what’s the point of calling a Charter Revision Commission.”