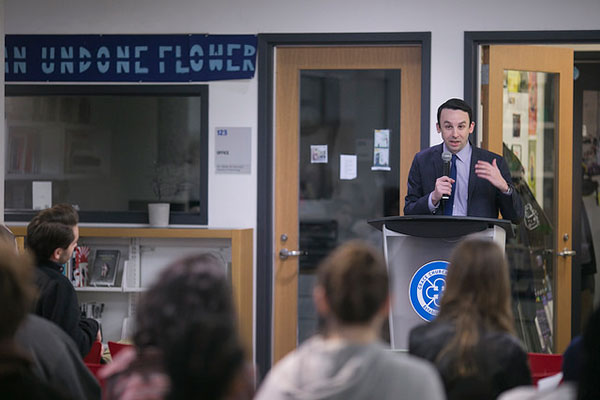 City Council Member Keith Powers, a former lobbyist who ran for election on a platform that included a 22-point electoral and government reform agenda, has introduced a package of legislation to make small but significant changes to the city’s campaign finance program.

Powers, a Manhattan Democrat, is proposing five bills, introduced at the full meeting of the City Council on Wednesday, that will change campaign finance thresholds and reporting requirements, with the goal of making running for elected office easier for first-time candidates and those with little access to wealthy donors.

The city’s campaign finance program is “already a gold standard,” Powers said, in a recent phone interview, but can be even more effective with certain tweaks. The package of bills, he said, were based on his personal experience with the New York City Campaign Finance Board’s public matching funds program -- which incentivizes small-dollar donations from city residents up to $175 by matching them at a 6-to-1 ratio -- and also a recent Council hearing where the CFB testified before the Committee on Governmental Operations, of which Powers is a member.

One of his bills would increase the small-dollar matchable amount from $175 to $250, giving smaller campaigns a boost in fundraising. Any candidate who wants to receive public matching funds must hit two thresholds -- a minimum number of contributions of at least $10 and a minimum amount. For instance, City Council candidates who participate in the program must raise at least 75 contributions from donors within their district and raise a minimum of $5,000. The thresholds are far greater for borough-wide and city-wide races.

A second bill would also reduce the lowest qualifying contribution from $10 to $5. “It makes it easier for candidates to hit the matching threshold,” Powers said.

The third bill in the package would establish a pilot program to provide full matching funds for special elections, where candidates must raise funds in a much shorter period of time. Currently, the CFB's program only provides matching funds up to 55 percent of the spending limit for a particular race. The bill would increase the match to 85 percent, effectively allowing candidates to raise as much as they are allowed to spend.

Finally, Powers also hopes to ease the burden of complying with the city’s campaign finance law for candidates that tend to run campaigns with limited funds. The CFB requires that all campaigns submit detailed disclosure reports of the money they raise and spend during an election season, a requirement that has at times been criticized as overly onerous for candidates who do not have experience with the program or the help of high-priced professional consultants to help them comply. Candidates who fail to file disclosures, or improperly file them, can incur costly fines sometimes amounting to thousands of dollars from the CFB after an election.

However, “small campaigns” that do not surpass $1,000 in fundraising and expenditure do not have to file these reports under the campaign finance law. The bill Powers is proposing would raise that amount to $3,000, lifting the reporting requirements on dozens of candidates. A companion resolution would also call on the state to do the same.

The intent of Powers’ proposals overlaps with Mayor Bill de Blasio’s February announcement that he will convene a Charter Revision Commission to explore, among other things, limiting the influence of moneyed interests in city elections and reducing contribution limits. To some, a commission that would look at campaign finance seemed duplicative and Powers is among those who are skeptical about the need for a commission to essentially do the City Council’s job. “We can legislate these issues without a Charter Revision Commission,” Powers said, noting that he also considered legislation to reduce contribution limits, but only for special elections. There has been some talk about reducing the maximum individual contributions allowed, which just recently rose slightly to $5,100 for city-wide candidates and $2,850 for City Council candidates, which de Blasio’s commission may explore.

Powers did praise the mayor for propelling a much-needed debate, and said it was an opportunity to move ahead with more drastic changes to the public financing system. One change, he said, could involve increasing the cap on matching funds available to candidates from 55 percent of the spending limit for their seat to 85 percent. That proposal is currently before the Council in legislation from Council Member Ben Kallos, the former chair of the governmental operations committee.

“I think it’s a totally fine idea to have a Charter Revision Commission and doing contribution limits as one of the topics totally makes sense,” Powers said. But, he added, “I want to have a Commission that includes a conversation about the larger structure of city government...At a moment when we have a need for more representation across the board, especially for women in the City Council, I think it’s important that we look to remove any barriers to running for elected office.”

City Council Speaker Corey Johnson, in partnership with Public Advocate Letitia James and Manhattan Borough President Gale Brewer, is pushing ahead with a separate Charter Revision Commission, with a broader initial mandate. A bill to create that commission is expected to pass the Council this week.

Powers also promised that he has another package of bills he will introduce down the line that relates to contribution limits, matching funds, and contributions from individuals and entities doing business with the city. This may coincide with the typical process by which the Campaign Finance Board issues its post-election report, due in August, with recommendations for changes to the campaign finance system, usually the subject of a government operations committee hearing and subsequent legislation.

And Powers is also introducing a connected bill that would affect the city’s doing business database of companies and individuals that work for or with the city. Entities on the Doing Business Database are significantly limited in the amount of money they contribute to electoral candidates and their donations are not matchable under the public funds program. For mayoral candidates, the doing business contribution limit is $400, and for City Council candidates it’s $250.

Powers’ bill would directly address real estate developers, who have been some of the largest donors in recent elections and have spent millions to support candidates from city-wides down to the boroughs and Council districts. The bill would mandate that developers formally seeking a city contract are added to the doing-business list so that their contributions are reigned in.

Developers who submit land use applications for city-proposed developments would be entered in the doing business database at an earlier stage in the Uniform Land Use Review Procedure (ULURP). Currently, developers are only included in the database once their application is certified. Powers’ bill would require that they are listed once they apply to start the certification process, moving the timeline of their inclusion in the database up by a few months.

“Sometimes, years before the ULURP, developers can be talking with the administration,” he said, highlighting the necessity of the bill.