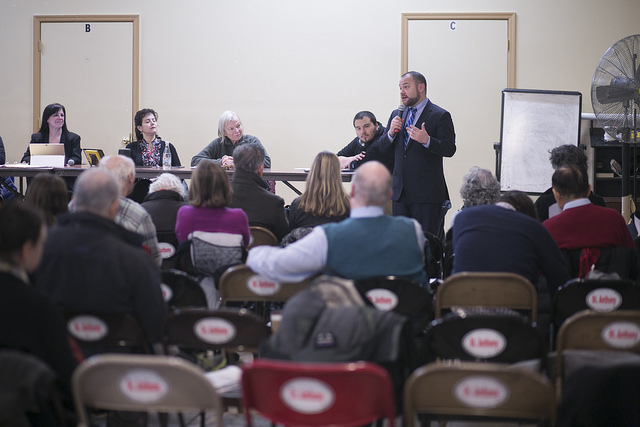 The mayor’s Charter Revision Commission met on Tuesday at the Pratt Institute for the third of its four expert advisory issue forums, this time discussing potential changes to community boards and the city’s land use process. The first meeting, held last Tuesday, focused on voting and election reform, while the second, held last Thursday, focused on campaign finance reform.

The commission, consisting of 15 members appointed by Mayor Bill de Blasio, including Chair Cesar Perales, will finalize a list of proposed changes to the city charter by early September that will then appear on the general election ballot in November for voters to approve or disapprove.

Stakeholders and experts such as City Comptroller Scott Stringer, community board members, academics, and advocates provided commentary and recommendations for the commission regarding the issues of community boards and land use; on some issues, the panelists and the commissioners all seemed to be in broad consensus, while on others there was evident discord.

One area of relative cohesion was a recommendation that all community boards have a full time expert on urban planning as a paid staff member, though it is unclear that this would rise to the level of being charter-mandated (there has been City Council legislation introduced to make such a requirement for each community board, which, if passed, would become a part of the city’s administrative code, not the charter). Most community boards are said to be understaffed and rely on volunteers to do important work; board members are all volunteers, which can both tilt the demography of the boards in certain directions, like wealthier than the represented area, and lends itself to a general lack of intimate knowledge of planning.

Stringer, who noted that he became the youngest ever appointee to a community board in 1977 at the age of 16, made his position clear, saying “what is truly needed” is “a full time urban planner on the staff of every community board.”

“The sole responsibility of this planner would be to support the board’s analysis in the development of recommendations on land use matters and to coordinate community based planning activities,” he continued. “Expertise of the urban planner would better enable community boards to conduct comprehensive community planning.” Stringer said the urban planner should have a degree in urban planning, architecture, real estate development, public policy, “or similar disciplines,” and that the city must “include the necessary budget appropriations to fund this position.”

“A community planner would be a game-changer in communities that are experiencing extraordinary land use applications, and quite frankly, they don’t have the expertise and they’re at a tremendous disadvantage,” Stringer said.

Kyle Bragg, a charter revision commissioner and secretary-treasurer of labor union 32BJ SEIU, questioned whether all community boards would need a land use professional, saying that land use applications (ULURPs) are not constantly being considered in a community board like Far Rockaway as much as in Midtown Manhattan. Stringer disagreed, saying that development is occurring all over the city and that “gentrification knows no bounds.”

Stringer also recommended that the city provide training on issues of land use to members of community boards on a periodic basis, something that Stringer said he prioritized as Manhattan Borough President (borough presidents appoint most community board members in their respective boroughs).

Stringer did not, however, endorse community board member term limits, breaking with some of his fellow testifiers. “When you have term limits, you also have a lame duck status that sets in,” he said. “We’re gonna see that with people now in their fifth year wondering what office they’re gonna run for next, and I dare say you’re gonna see a lot of musical chairs and people thinking about the future, not necessarily the job in front of them. And that’s just the reality of elected term limits,” he said, in apparent reference to the dozens of City Council members, five borough presidents, and three citywide officials who are all term-limited at the end of the current term. Instead, he endorsed a process undertaken during his borough presidency of periodic reviews of board members, reappointing those doing a good job and sacking those who weren’t.

Community board members who testified did not offer unequivocal support to term limits.

“I think it takes a couple of years to try to figure out how to write a resolution, how to understand city government,” said Shah Ally, chair of Manhattan Community Board 12. “But I also don’t think you need to be on the board 30 years, either.”

“Community board members should be term-limited, serving [up to] five consecutive two-year terms,” she said, while noting that the term limits should be phased in gradually to “ensure there is not a mass exodus of institutional knowledge from the boards.”

Stringer claimed that community boards have deviated significantly from their ancestral origin in 1951, at the impetus of Manhattan Borough President Robert Wagner, as Community Planning Boards. The comptroller said that, with numerous elected officials maintaining district offices, the use of community boards for constituent services draws resources away from the more integral tenet of land use.

During the portion of the commission hearing focused on land use, two general themes played out among the speakers: that the land use process does not adequately facilitate community input and that the process is more geared toward short-term zoning concerns and less toward long-term community planning.

“The symptom of the conflict, the neighborhood-city conflict, throughout much of the ULURP process that can both stop good things from happening and also not give communities power over unneeded or unwanted uses, is a sense that there is no ability to proactively community plan,” said Moses Gates, the vice president of housing and neighborhood planning at the Regional Plan Association. “That unless you’re able to put forth a positive vision that has some oomph behind it, and some ability to be recognized, that the only option you’re left with is an option of obstruction, or an option of essentially trying to go through the process and make the best of what might be perceived as a bad deal.”

Gates recommended the creation of an “Office of Community-Based Planning” to assist communities, and community boards, in land use and planning. Gates also recommended a charter codification of a “fair share” program, wherein communities shoulder burdens of ill-desired land uses, like a sewage treatment plant for instance, equally, instead of being shouldered disproportionately by communities without the political and social capital to fight those land uses.

“Planning is more than land use,” said Elena Conte, director of policy at the Pratt Center for Community Development. “It properly considers the systems and the structures into which land use fits. It’s about the social, environmental, and economic wellbeing, and land use is not planning. And so I think we are asking the wrong questions of our land use procedures, right? Both government, stakeholders, developers, and communities feel as though too much is being lumped onto the process unfairly.”

Others, such as Hunter College professor Tom Angotti, said that the important decisions are often made unaccountably in the “pre-ULURP” process, meaning a period before the city’s official Uniform Land Use Review Process that takes land use decisions from developers or the City Planning Department to community boards to the Borough President and Borough Board to the City Planning Commission and, finally, to the City Council.

“All those discussions that go on, side discussions, agreements that get made behind closed doors, are part of the undemocratic process that precedes ULURP,” said Angotti. “And it’s followed by a series of public hearings, at the community level, at the borough president level, at the City Planning Commission level, at the City Council level, which are more theater than true democracy. Why? Because we’re stuck in a method for participation that is bankrupt.” Angotti noted that concerned citizens are often forced to wait hours in order to testify for three minutes to a few sleepy-eyed bureaucrats.

Angotti also recommended that ULURP decisions be made based on preordained “197-a” plans submitted by community boards, rather than on an ad hoc basis. Since the 1989 charter revision that established 197-a plans considerable by the City Planning Commission, only 17 community plans have been submitted to the city.

“The biggest single reform could be a charter requirement that every ULURP action be consistent with a 197-a plan,” forcing both community boards to submit such plans and the City Planning Commission to take them seriously and not simply shelve them.

Commision Chair Perales, however, criticized the land use panel of testifiers as failing to clearly present their recommendations in a digestible manner.

“We are supposed to put something clear and concrete before the voters,” Perales said. “We’re not decision-makers here. We’re here to determine what it is the issues that you think should be addressed in a revision of the city charter. And if you have the opportunity, or are so inclined, maybe go back and send us something that will help us to digest, better understand, what your positions are on what we can do about land use with what are gonna be relatively minor changes in the city charter.”

“Remember,” he continued, “you don’t want to go into the voting booth and have to review a three page referendum that this planning commission put before you, so we have a tough job, and while we have been persuaded by many of your comments, I’m not so sure we understand how to put it before the voters.”