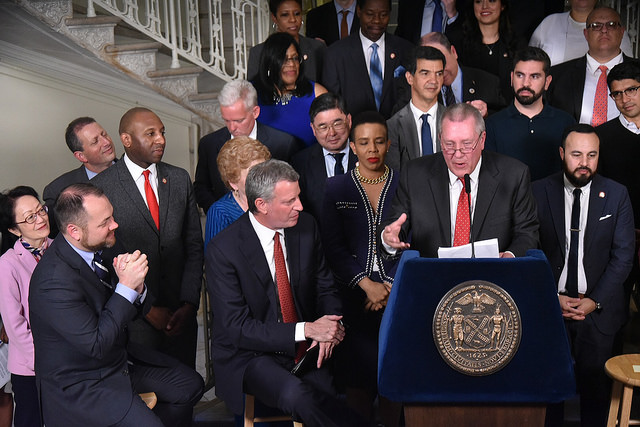 At several budget hearings earlier this year, New York City Council Speaker Corey Johnson took a hard line on transparency. He insisted that Mayor Bill de Blasio’s administration was being less than forthcoming on how money is spent and was hampering the Council’s charter-mandated authority to review and approve the city’s spending plan. To wit, in its official response to the mayor’s preliminary budget in April, the Council proposed adding 123 new units of appropriation -- budget lines that explain expenditures -- in order to more clearly and specifically show what the city is spending money on.

When the city’s new $89.2 billion budget was approved last week, however, the Mayor’s Office of Management and Budget only added a total of five new units.

“We’re going to work with the Council,” de Blasio promised at at the release of his executive budget proposal in late April, two weeks after the Council’s response, when Gotham Gazette inquired about the push for more units of appropriations. “We have, over the years, been adding. We’re open to adding more. That’s an ongoing discussion, which we’ve had again today with the Council. Stay tuned.”

But there was little news to stay tuned for. The five new lines in the adopted budget include four under the Department of Information Technology and Telecommunications -- two each for the Mayor’s Office of Media and Entertainment (MoME) and the NYC Cyber Command office which both fall under DoITT’s purview. Those units are for personal services (PS) which covers salaries and wages of agency employees, and other than personal services (OTPS) which includes costs such as office supplies, equipment, maintenance, and the like. In total, those budget lines cover $25.2 million in expenditures for MoME and $65.8 million for the Cyber Command.

The fifth unit of appropriation was created under the Department of Housing Preservation and Development, to allow the Council to look at expense funding allocated for the New York City Housing Authority, about $255.4 million for the 2019 fiscal year, which begins July 1 of this year.

It should be noted that the separate capital budget, which outlines city spending on infrastructure,includes six new budget lines -- one for the Brooklyn Public Library and five within Parks Department expenditures.

In April, at a hearing on a mid-year modification to the current annual expense budget, the Council first showed indications that it wouldn’t approve OMB’s requests without greater disclosure from the administration. Then, at a May hearing on the executive budget, prior to the new units of appropriation being added, Council Member Daniel Dromm, the chair of the Council’s finance committee, which leads the budget process at the Council, excoriated OMB officials for their refusal to be more transparent, insisting that the administration “must discontinue the longstanding practice of using vague and overbroad units of appropriation” over more specific ones.

Dromm continued, “While such a shift is understandably resisted by the Mayor because it would restrict his ability to transfer funds between programs without oversight and to avoid seeking budget modification approval from the Council, it is necessary to facilitate the Council’s and the public’s understanding of agency spending and performance and to more transparently track the Administration’s priorities.”

But the Council’s response to Gotham Gazette’s queries about the units of appropriation were more tempered. “[The] Council is very pleased with the end results of this budget process and is committed to more transparency measures, including continuing the push for more lines of appropriation,” said Jennifer Fermino, a spokesperson for the speaker, in a statement.

A spokesperson for Council Member Dromm did not respond to a request for comment.

Maria Doulis, vice president of Citizens Budget Commission, an independent fiscal watchdog that advocates for increased budget transparency, among other changes, said the Council’s push for transparency likely fell by the wayside as it negotiated larger priorities such as discounted MetroCards for low-income New Yorkers.

“It might be best to come to some sort of agreement about this outside the budget because when you’re negotiating a budget, it’s all about the dollars and cents and not necessarily how the dollars and cents are presented,” Doulis said in a phone interview. She said the five new units are a “micro step forward” and that the Council must remain committed to a long-term approach, which could happen through a dedicated working group.

She also noted that the City Council has failed to push for transparency at crucial moments. She pointed out, for instance, that the mayor announced a new labor deal with the United Federation of Teachers on Wednesday but without details of how the spending will be reflected in the city budget. “So all these Council members are on this press release and they’re happy to laud and support this effort,” Doulis said, “but I didn’t hear any of them saying, ‘And we’d like to see a full accounting of what exactly the city will be paying for on this.’ So I don’t know that transparency is any better or worse than it was last year, or a couple of years ago under Mayor Bloomberg. In my mind it’s pretty much the same or marginally better.”

Although Doulis did say that the city’s budget is enormous and complex, and that the administration does publish more budget documents than other local governments, she said there should nonetheless be improvements. “The question is, can the average citizen ask a basic question about services that he or she cares about and their costs and look in the budget to find an answer fairly simply and easily,” she said, “and the answer to that is ‘no.’”