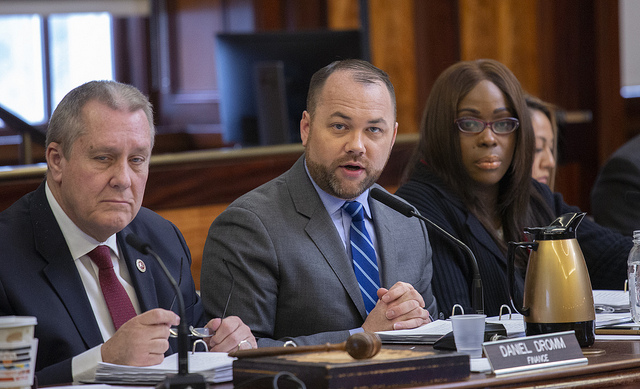 City Council Speaker Corey Johnson appeared frustrated on Wednesday with the de Blasio administration budget at the Council’s first hearing to examine the mayor’s $92.2 billion preliminary budget proposal for the 2020 fiscal year, which begins July 1 of this year.

Mayor Bill de Blasio released his preliminary budget proposal last month warning of the “tough choices” the city faces as it heads towards an economic slowdown, with revenues already coming in lower than last year. For the first time since he took office, the mayor instituted a Program to Eliminate the Gap (PEG), which is meant to find the majority of $750 million in additional savings the mayor promised by the time the executive budget is released in April.

Nonetheless, the mayor’s budget increases spending by $3 billion owing largely to costs from new contracts with labor unions, education spending, debt service costs, and fringe benefits. There are few new initiatives that add costs, while the threat of state budget cuts and cost shifts continue to loom -- the state is in a tougher fiscal situation than the city. The de Blasio administration also did not include any additional allocations to the city’s reserves, which remain strong but not as robust as some watchdogs believe they must be in order to withstand a recession.

“The Council agrees that we need to be cautious but that caution needs to be exercised with precision,” Johnson said in his opening remarks at Wednesday’s hearing, worried about the possibility that the mayor’s PEG program could lead to cuts in social services. He criticized Melanie Hartzog, director of the Office of Management and Budget, for her lack of specific answers about the PEG, and expressed frustration that the mayor seemed intent on finding millions of dollars in such savings after years of having ignored similar calls from the City Council.

Johnson also noted that the mayor’s signature initiatives, such as universal pre-kindergarten, 3-K, and the ThriveNYC mental health plan spearheaded by First Lady Chirlane McCray “are flush with funding” and safe from the PEG, compared with the rest of the budget. “Just because a program or initiative is new, transformative, or a mayoral priority, should not shield it from oversight,” he said. “The Council is not a rubber stamp. Everyone else is being asked to tighten their belts, while a few key initiatives seem exempt.”

“Everything must go under a microscope,” he said of the PEG program, but insisting that the city should not take away funding from agencies “where funding is already spread thin and agencies are already struggling to meet their core missions.” He noted that, as a result of the city’s focus on particular priorities, other larger issues are ignored. For instance, the de Blasio administration has focused on affordable housing through the Housing New York plan but NYCHA residents continue to live in deplorable conditions, he said. “Inattention to issues considered secondary and to longstanding problems can lead to a remarkable phenomenon of governing by monitor,” he said. “There are now federal monitors for NYCHA, the FDNY hiring process, the city’s jails, and police reform, to name a few.”

Hartzog, the administration’s top budget official, acknowledged early on in response to Johnson’s questioning that the city may have to find additional savings once the state budget is finalized (it is due by April 1) and personal income tax revenues become clearer.

Of the $750 million savings target, she said $544 million constituted the PEG and was to come from agencies finding efficiencies and cuts (the rest will be achieved through continuing a partial hiring freeze the mayor put in place last year and through debt service payments). Those target amounts for individual agencies were released on Tuesday. They include, for instance, $123 million from uniformed forces including the NYPD, FNDY and others; Health and welfare agencies, including the Administration for Children's Services and Health + Hospitals, will have to find nearly $147 million in savings; The DOE and CUNY will have to identify $110 million; Agencies in charge of housing and economic development will have to find $52 million in savings; Another $40 million will have to come from infrastructure, libraries and cultural institutions; and several other agencies will together have to find about $70 million. Even the mayor's office will reduce spending, by about $1.6 million.

But Hartzog could not specifically say where each agency would have to look, which frustrated Johnson. “If we’re gonna have a real hearing on these cuts and do our job of oversight on the city’s budget, we can’t have a conversation with you today about whether those cuts make sense or are valuable when you’re not giving us specific programs,” he said. “This is strange to me.”

Hartzog, though, emphasized that OMB was working with agencies on the PEG and would have all the information by the executive budget. “This is not anything new that we have done,” she said.

Tensions seemed to rise between Johnson and Hartzog at times, including when he suggested that top OMB officials don’t treat Council finance staff with respect and have long ignored the Council’s recommendations on finding new revenues and agency efficiencies. When Hartzog refused to state her opinion on the city’s dearth of funding for outreach efforts for the 2020 Census, Johnson asked rhetorically, “Why are we having this hearing?”

Dromm pointed to several expenses that were missing from the budget including discretionary Council funding, which was $391.3 million last year; additional costs for school bus services as the Department of Education is in the process of securing new contracts; several one-time education programs funded up to $122.6 million last year; and an overtime budget worth $1.3 billion, $400 million lower than the average overtime spending from the last five years.

“More than ever we need to keep growing our reserves to protect against shortfalls and painful mid-year cuts to vital services,” he said. “Indeed, we can’t afford not to.”

Gibson, whose subcommittee was created last year to specifically examine the problem-ridden capital process, said the administration “continues to fail to comply with the letter and the spirit of our charter” in providing the necessary documents about the capital budget. The $104.1 billion preliminary ten-year capital strategy is $14.5 billion more than the last ten-year strategy that was approved by the Council.

Hartzog did have one piece of good news about the city’s capital budget. She noted that Moody’s Investors Service upgraded the city’s general obligation bond rating, which would lower the city’s borrowing costs. Dromm later said the Council projected about $343 million in savings from that rating upgrade though OMB did not have its own projection.

But the strategy, Gibson said, includes several instances of “unrealistic planning,” noting that $75.5 billion or 72.6 percent of the ten-year capital strategy is outlined for just the first five years. For instance, it includes $853 million for NYPD facilities in the first three years and only $160 million for the same need in the next seven years. The capital budget also includes “significant excess appropriations” and does not track capital project spending or completion, Gibson noted.

“This issue is not new to this administration,” she said, though she did praise officials for reducing excess appropriations last year by $5.9 billion and adding new budget lines to give more clarity to the process.

Hartzog conceded that capital planning has been a challenge for the city but that the administration has been working to distribute capital expenditures across the ten-year plan. “We’re gonna continue to work on that so that you will see over time that the...out-years of the ten-year plan smooth out and it wouldn’t be as high in the first five years,” she said.

Comptroller Scott Stringer and officials from the Independent Budget Office (which released a report on the budget on Wednesday) also testified before the Council on Wednesday. Stringer, who released his own analysis of the mayor’s preliminary budget last week, continued to emphasize the need for a greater budget cushion by putting away more funding in reserves. “Given the uncertainty on the horizon, I am increasingly concerned that we simply have not done enough to hedge against the risks,” he said in his testimony.

The Council will continue to evaluate the preliminary budget over the next several weeks, with specific agency heads being called to testify, before the Council issues its response. The mayor’s updated executive budget in April will then go through another round of Council hearings before the final spending plan for the next year is adopted.

Note - this article has been updated with PEG targets released by the mayor's office and to clarify that the PEG is meant to find $544 million in savings, not the total $750 million.